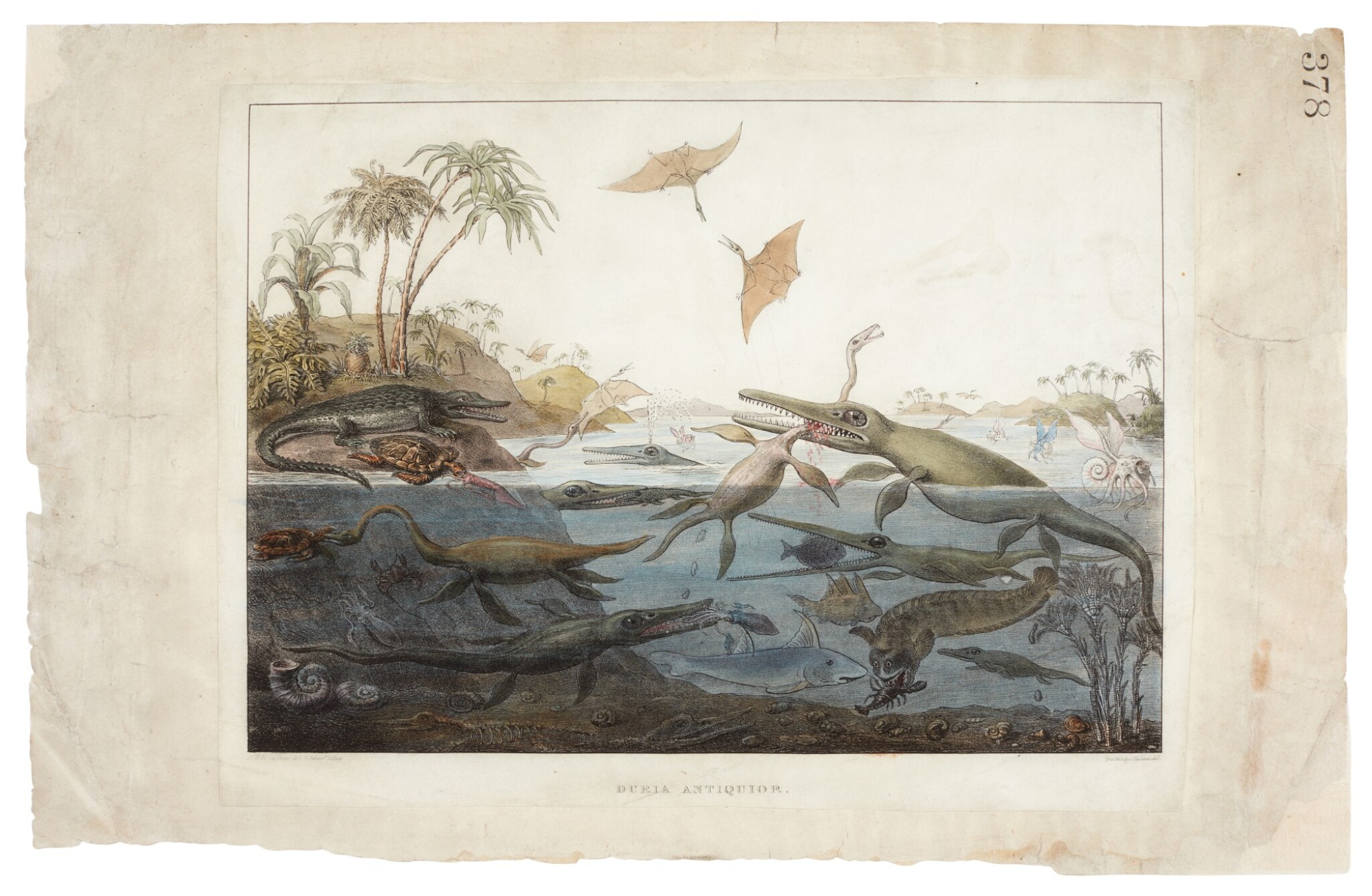 AN EXCEPTIONALLY RARE HAND-COLOURED COPY OF THE FIRST PICTORIAL REPRESENTATION OF ANCIENT LIFE DERIVED FROM THE FOSSIL RECORD. The artist, Henry de la Beche, was a pioneer geologist and major collector of fossils from South-West England's Jurassic Coast. This scene, which depicts creatures from deep time interacting with each other in a realistic setting and makes use of the latest scientific discoveries, is a foundational image of palaeoart, a genre which has since become key to the public understanding of - and fascination with - palaeontology.

The creatures depicted in Duria Antiquior (a more ancient Dorset) were those found by Mary Anning and other fossil hunters along the Dorset coast. De La Beche's vision of early Jurassic life is deeply informed by the work of William Buckland, who saw in the fossil record evidence of "the general law of Nature which bids all to eat and be eaten in their turn". At the top of the food chain is the formidable Ichthyosaur, the most ferocious of which is shown breaking the neck of a Plesiosaur at the centre of the image (both of these animals had recently been described by another leading geologist, William Conybeare). Pterosaurs (discovered by Anning in 1828) fly in the sky, the seas are full of ammonites, belemnites, and pentacrinites. The ichthyosaurs are even shown producing faeces which is gently sinking to the seabed, becoming the coprolites identified by Anning and Buckland.

In 1830 De La Beche arranged for his watercolour to be reproduced as a lithograph in order for sale proceeds to support his friend Mary Anning, who was in financial difficulties at the time. The print run is uncertain but the publisher, Hullmandel, frequently produced very small runs of lithographs on commission. Individual prints were sold for the high price of £2 10s so the number must have been small, presumably the very low hundreds. William Buckland played an active role in the distribution of copies: he arranged for copies to be sold to fellows of the Geological Society; he send 100 copies to Mary Anning for her to sell from her shop; and he made use of it in his own lectures in Oxford. (See Sharpe, The Fossil Woman: A Life of Mary Anning (2020), pp.102-3). Only a handful of copies of Duria Antiquior are now recorded in institutional collections and we have found no record of a copy on the auction market. This earlier state, hand-coloured, with no key, and on Whatman paper, is particularly rare.

An ongoing census by Tom Sharpe has identified just 24 copies of Duria Antiquior (including this one), of which the vast majority are in institutional collections. Most surviving copies are of the lithograph in its later state and the only known hand-coloured copy of Duria Antiquior outside the Buckland family collection is in the archives of the British Geological Survey.

Sotheby’s is grateful to Tom Sharpe for his assistance in cataloguing this lot.