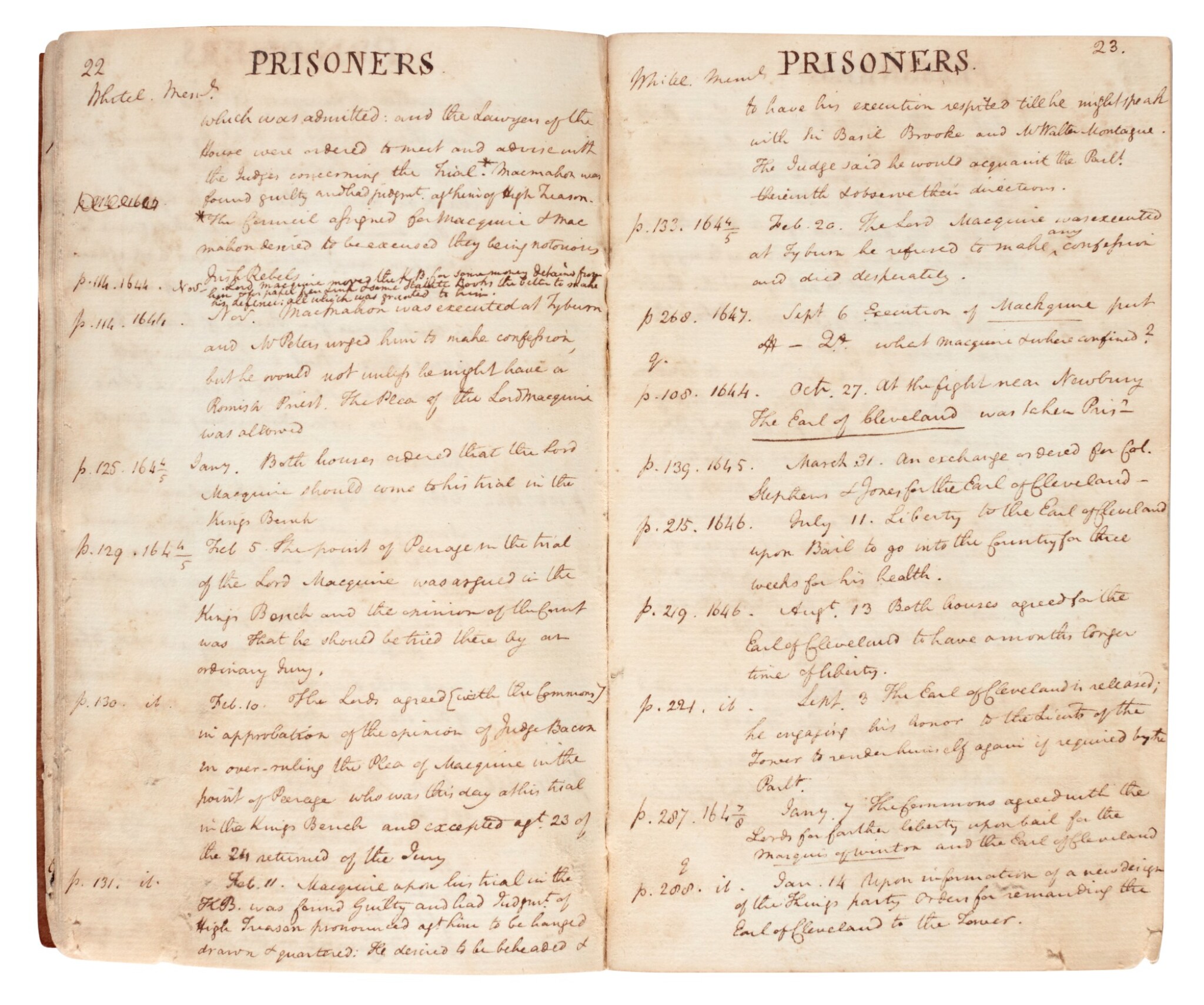 Manuscript history of the Tower of London

final part, labelled on upper cover ("Tower | 6 | Index"), comprising notes on prisoners held in the Tower during the Civil Wars of the 1640s, drawing on various sources including by Paul de Rapin, Clarendon, Evelyn, and Bulstrode Whitelock, 28 numbered pages, and a thumb-index with list of prisoners held in the Tower, altogether 51 pages, plus blanks, small 8vo, roan, c.1794

[with, loosely inserted:] a note on the life of John Bonney, once sent as a letter, address panel, postal markings dated 29 November 1825

A HISTORY OF THE TOWER OF LONDON WRITTEN BY A MAN WHO SPENT SIX MONTHS AS A POLITICAL PRISONER WITHIN ITS WALLS. John Augustus Bonney (1763–1813) was lawyer and radical who was caught up in the political ferments of the early 1790s. As attorney for the Society for Constitutional Information he defended Thomas Paine (tried in absentia) and, on two occasions, Daniel Isaac Eaton, before he was himself arrested for treason in May 1794. Pitt's government's suspension of Habeas Corpus meant that Bonney was imprisoned for more than six months without trial. He spent most of this period in the Tower, before he was eventually released without charge on 1 December 1794. The notoriety of his imprisonment dogged Bonney for the rest of his life, leaving him open to accusations of Jacobinism by his political opponents when, in later years, he lent his support to reformers.

His history of the Tower was probably begun within its walls, and was completed in its shadow as, unable to escape his association with Britain's most notorious place of imprisonment, Bonney continued his study of its history. It was unpublished in Bonney's lifetime and the bulk of Bonney's papers on the Tower are now held by Edinburgh University Library (GB 237 Coll-307). Bonney's close personal connection with the Tower is emphasised in the near-contemporary letter on Bonney that accompanies the manuscript and which ascribes to him the 'Epitaph on a Goldfinch' that was written on the wall of Beauchamp tower on 23 June 1794:

Where Raleigh pin’d within a prisons gloom,

I cheerful sung, nor murmured at my doom;

Where heroes bold, and patriots firm could dwell,

But death, more gentle than the law’s decree,

Has paid my ransom from captivity.

Damp damage, fragile at edges with some loss