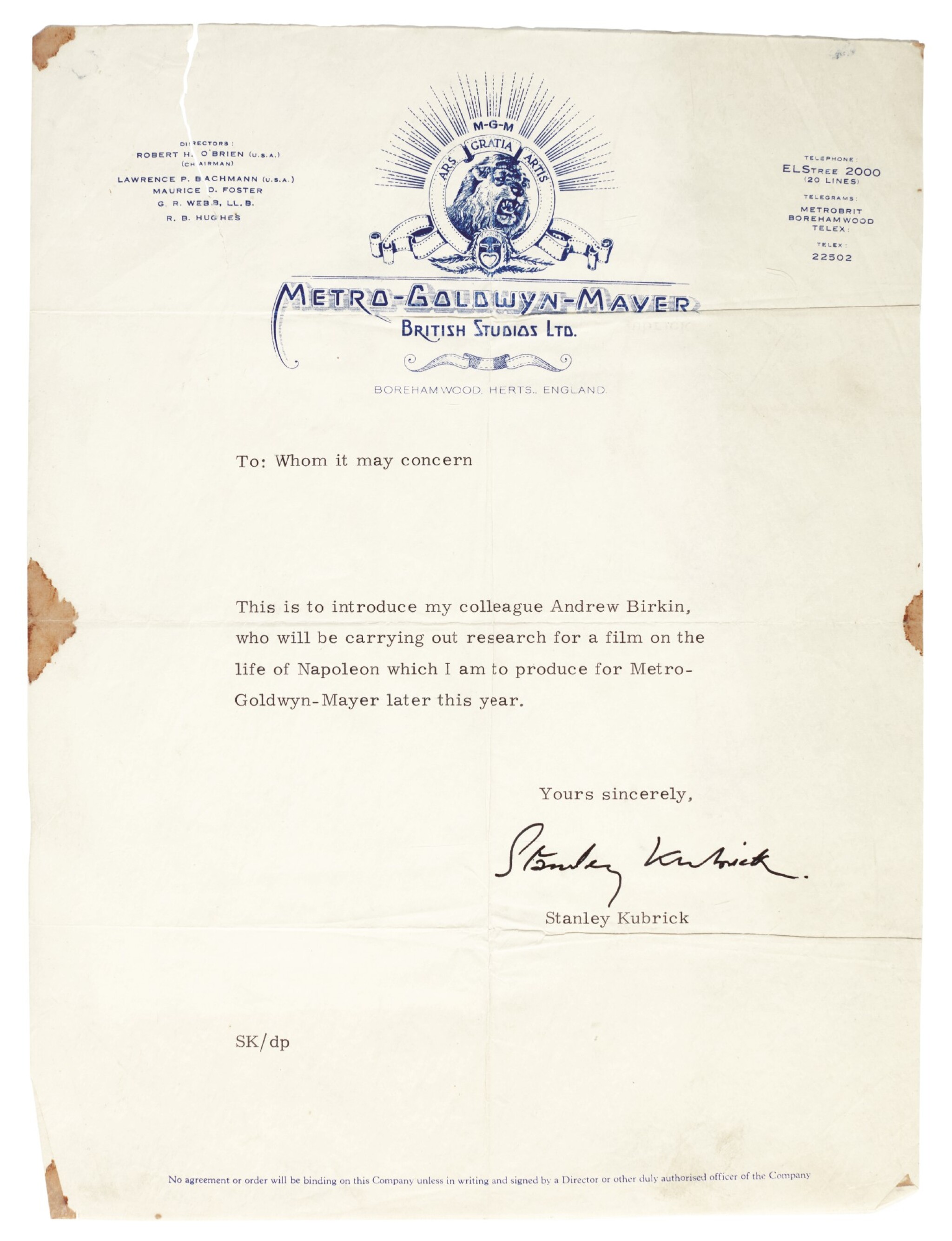 Papers of his assistant Andrew Birkin on location research in France and Italy for the unmade film Napoleon, comprising:

Five notes and letters signed by Kubrick (two autograph), one ("To Whom it may concern") introducing Birkin as his researcher for Napoleon, and one listing Napleonic locations in Paris; series of telegrams from Kubrick to Birkin; further correspondence relating to the project such as letters by conservators and curators; lists including items photographed at the Musée de l'Armée at les Invalides (23 pages), Napoleonic books (9 pages), 253 Napoleonic locations from Corsica to St Helena (34 pages), and characters; schedule for location scouting in Italy (October-November 1968); notes, memoranda (e.g. outline of possible production in Romania), and ephemera (e.g. authorisation to photograph at the Louvre); many items in photocopy; 1968-69; housed in a lever-arch file; with a rubber stamp designed by Birkin for the production (and utilised by Taschen as the logo for their massive book Stanley Kubrick's Napoleon: The Greatest Movie Never Made, see below)

...It's impossible to tell you what I'm going to do except to say that I expect to make the best movie ever made... (Kubrick to Audrey Hepburn, offering her the role of Josephine)

Kubrick started work on Napoleon, his most famous and tantalising unrealised project, when 2001 was still in post-production. Andrew Birkin, who had worked on the previous film, was recruited to scout locations and became a long-term research assistant and potential assistant director. Pre-production started in 1967 at the MGM studio in Borehamwood, and after Birkin's impressive work on 2001 -- where he had helped advance the process of 'front projection', used most effectively in the 'Dawn of Man' opening sequence -- the legendary director offred Birkin a potentially integral role. After the release of 2001 Birkin was given free rein to scout and photograph locations in France and Italy as he pleased, backed by Kubrick's instruction to "go everywhere Napoleon ever went and photograph it". Undistracted by his sister Jane's new relationship with Serge Gainsbourg, and the ensuing student riots, he started amassing a considerable archive of photographic references. MGM bankrolled pre-production at a cost of $420,000 within a few months, but then, at Christmas they suddenly pulled funding, apparently spooked by the recent flops of Hello Dolly! and Star!. The project was finished in practice, though it was occasionally revived in future years (at one time with the prospect of Jack Nicholson in the lead). What remained however was a very substantial Napoleonic archive. This is Birkin's contribution from that period, enhanced by the splendid 2011 Taschen limited edition folio celebrating the unfinished project, and Guyot's 1921 extra-illustrated biography.