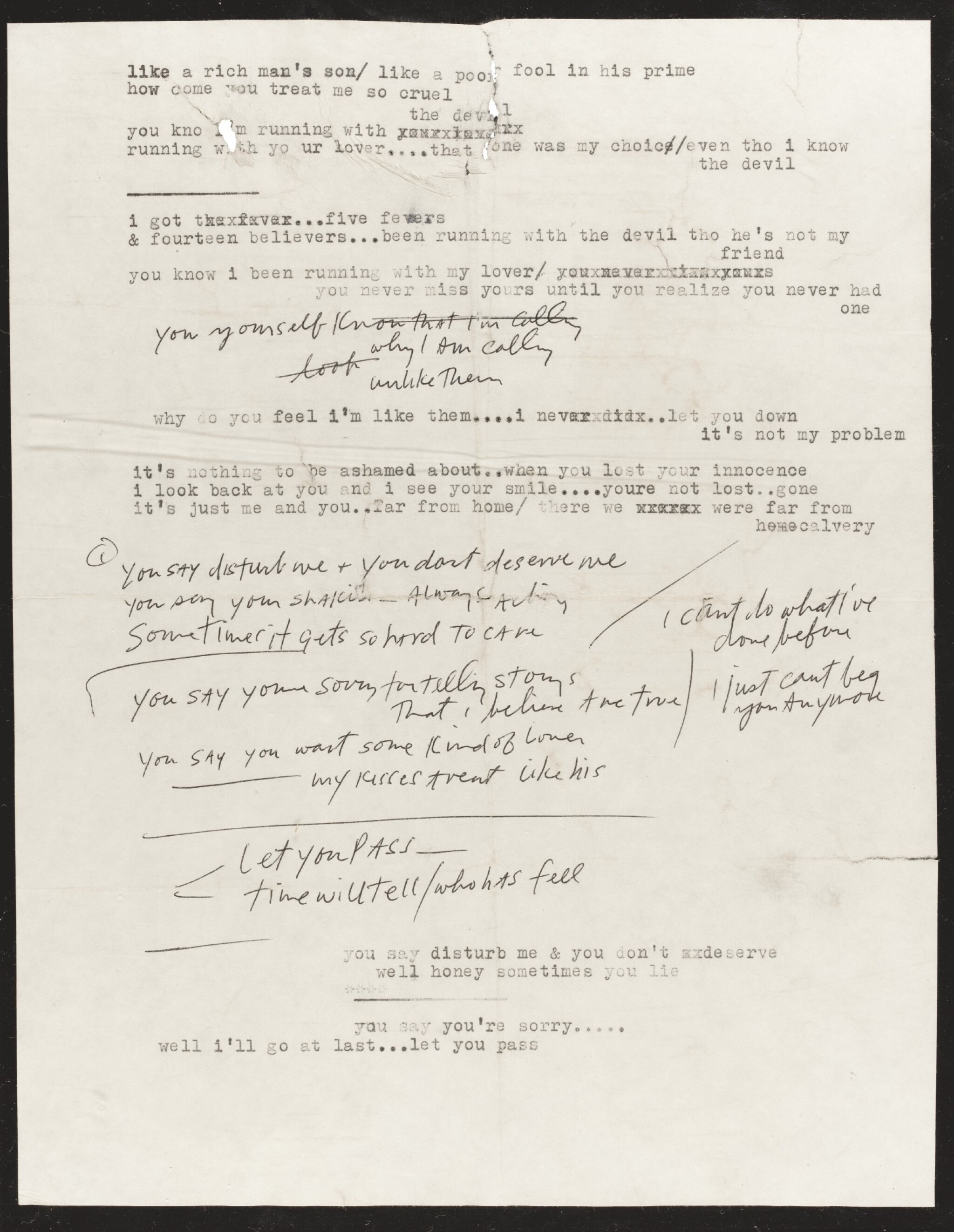 'Most Likely You Go Your Way (and I'll Go Mine)', partial autograph manuscript and authorial typescript lyrics

also including an abandoned song fragment beginning "like a rich man's son/ like a poor fool in his prime", altogether 16 lines in typescript and 16 lines in autograph, with revisions and corrections, one page, foolscap (277 x 215mm.), [probably Nashville, February-March 1966], framed and glazed alongside a photographic portrait of Dylan (frame size 415 x 520mm.), creased, splitting at folds, two tears towards the head of the leaf one with the loss of two letters

A RARE WORKING MANUSCRIPT BY DYLAN AT THE HEIGHT OF HIS POWERS. 'Most Likely You Go Your Way', with its infectious rhythm and accessible lyrics that turn, as in so many Dylan songs, on the speaker's cynical response to the ending of a relationship, is one of the most memorable songs on Blonde on Blonde and has long been a stalwart of Dylan's live performances, most notably serving as the opening and closing number in his 1974 tour with The Band (recorded as Before the Flood). What gives this manuscript exceptional interest, however, is the presence of a second, abandoned, song alongside the draft of this well-known piece.

This draft is an example of the outpouring of fevered creativity that lay behind the classic album Blonde on Blonde, its three stages of composition providing a revealing example of Dylan's fecund imagination. Dylan began by typing the beginning of a song containing a repeated refrain about "running with the devil", which ends in a fragmentary state after some twelve lines with the words: "It's just me and you .. Far from home/ there we were far from calvery". Then, at the bottom of the page, Dylan typed an unrelated four lines, beginning "you say disturb me & you don't deserve me | well honey sometimes you lie". It was these lines which formed the kernel from which 'Most Likely' grew. Abandoning "running with the devil" - although lines, images, and themes were used in 'Temporary Like Achilles' and other songs in Blonde on Blonde - Dylan instead continued to develop the four final typescript lines in manuscript. The typed lines become the openings of the second and fourth verses of the song, a portion of the first verse is added in the margin, and he also writes an abbreviated version of most of the song's refrain ("Let you PASS / Time will tell / who has fell").

The combination of typescript and manuscript is typical of Dylan's mid-60s drafts. This is one of a group of manuscripts that first appeared on the market in the 1980s and 90s from the Blonde on Blonde sessions, and which are likely to have been written in Nashville, where Dylan recorded much of the album in February and March 1966. Although this draft lacks the song's title, which also concluded the refrain, another leaf that formed part of this collection included a numbered list of song titles including: "4. You Go Your Way, I'll Go Mine".