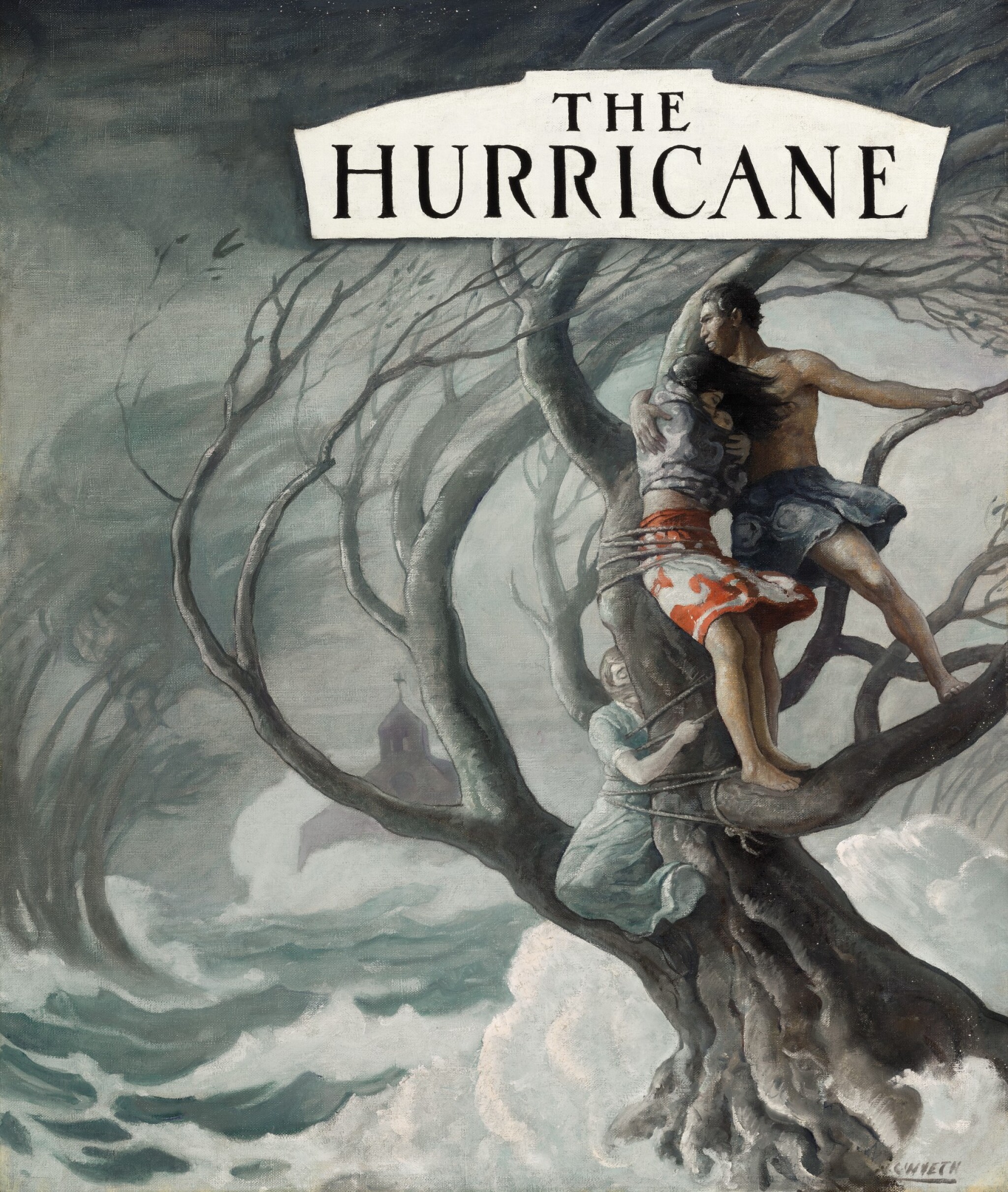 The canvas is unlined, there are small chips of paint loss primarily in the tree at the lower right and in the sky at the upper center. Under UV: there is no apparent inpainting. Framed.

Framed images of this lot are available upon request, please email elizabeth.goodridge@sothebys.com.

Little, Brown and Company, Boston (commissioned from the artist)

Charles Nordhoff and James Hall, The Hurricane, Boston 1936, illustrated on the dust jacket

N.C. Wyeth executed The Hurricane in 1935, as the "golden age of illustration" drew to a close. By this time, Wyeth had established himself as one of most prominent American illustrators, after studying at Howard Pyle’s eponymous art school and selling his first drawing to The Saturday Evening Post in 1903. He gained further national recognition when he received a commission from Charles Scribner & Sons to illustrate Robert Louis Stevenson’s Treasure Island in 1911. Wyeth’s career continued to flourish until his death in 1945, by which time he had created nearly 4,000 illustrations for books and magazines.

Little, Brown & Company commissioned the present painting for the dust jacket of Charles Nordhoff and James Norman Hall’s novel The Hurricane, a sympathetic tale of life on a Polynesian island as seen through the eyes of Dr. Kersaint, a French medic. The authors detail the brutality of the island’s malevolent French colonial ruler, who controls all aspects of life except the forces of nature. In this work, Wyeth captures the dramatic moment when a hurricane wreaks havoc on the island, the scene for which the novel is named.

The artist wrote that, “Convincing illustration must ring true to life. The characters should be of flesh and blood, not puppets who strike attitudes for the sake of composition, or manikins which serve as drapes for clothes, however effective the costumes in themselves may be” (quoted in Douglas Allen and Douglas Allen, Jr., N.C. Wyeth: The Collected Paintings, Illustrations and Murals, New York, 1972, p. 128). In The Hurricane Wyeth achieves exactly this, capturing the human emotion of the moment and bringing the palpable tension of the storm to life. He frames the scene with curving tree branches, which simultaneously draw attention to the center of the composition and allude to the undeniable power of nature, a theme that is present throughout the novel.