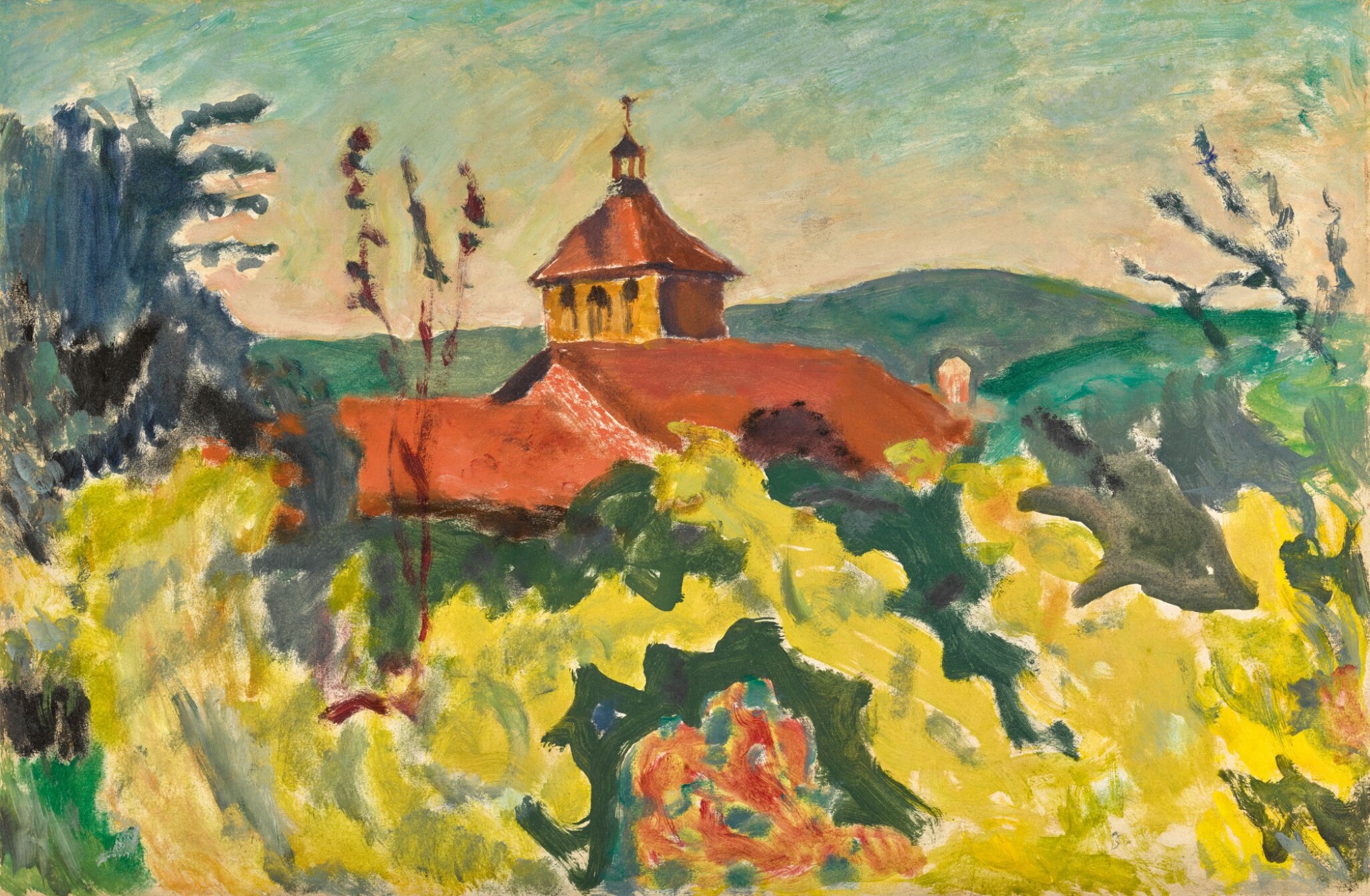 oil on card laid down on canvas

The card is stable and there are no signs of retouching visible under ultra-violet light. The stamp is faded and only the B remains. There is a repaired tear to the left of the lower edge (measuring approx. 4cm.) and a further small flattened crease to the left of the upper edge (measuring approx. 1.5cm.) There is some minor evidence of frame abrasion to the extreme edges which is not visible when framed. This work is in overall good condition.

Ruth Pruitt Philips, U.S.A. (purchased at the above sale)

Painted in 1894, Le Toit Rouge, is a vibrant early example of Bonnard's contribution to the Nabis movement. The son of a senior civil servant, Bonnard lived in an affluent suburb to the south-west of Paris, where he had a classical education and ultimately enrolled to study the law. While still completing his law studies, Bonnard attended painting classes at the Académie Julian in Paris where he met Paul Sérusier, Maurice Dénis and Paul-Elie Ranson, artists who later became central figures in the Nabis movement and follwers of Paul Gauguin. Bonnard started practising as a barrister once he had graduated but quickly abandoned that career to be an artist.

The word 'nabi', Hebrew for 'prophet', illustrates the self-consciously spiritual identity that the group adopted. The term ‘Les Nabis’ was coined by the poet Henri Cazalis who drew a parallel between the way the group of painters aimed to revitalize painting (as prophets of Modern art) and the way the ancient prophets had rejuvenated Israel. Considering themselves a creative brotherhood, Les Nabis combined this with other influences - including Japanese printmaking - to create unusual, varied and otherworldly compositions, infused with mystical or mysterious sub-texts. 'Japonisme', the word used to describe the impact of Japanese printmaking on Western artists, was coined just a few years after the country took a pavilion at the Paris World's Fair of 1867.

The Nabis movement was characterised by its strong interest in painting en plein air combined with the stylistic tendencies for broad, quick-patterned brushstrokes of yellow and green, which in the present work, creates the vegetation and light in the foreground. John Rewald said of Bonnard ‘no other painter of his generation was to endow his technique with so much sensual delight, so much feeling for the indefinable texture of paint, so much vibration’ (John Renwald, Pierre Bonnard, New York, 1965, n.p.).

Le Toit rouge was probably painted close to Côte Saint-André in the province of Dauphine, where the Bonnard family had its family estate Le Grand-Lemps. A region that afforded beautiful landscapes and unique light, it had long been a favourite spot for artists painting throughout the nineteenth century.