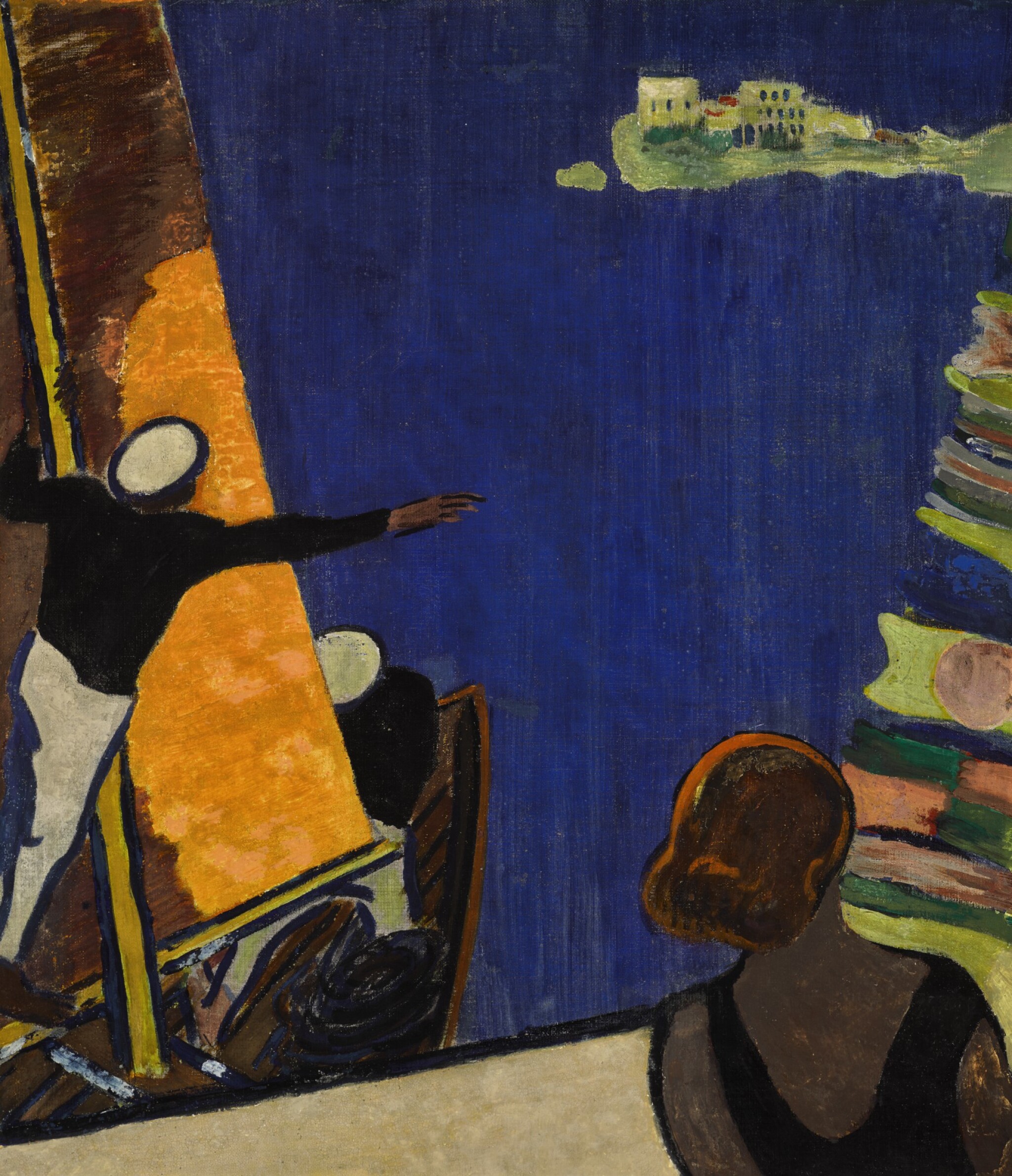 The original canvas has been fully relined and stretched on a new keyed wooden stretcher. Some undulations of the lining are visible on the reverse.

It would appear that the artist's tempera medium has flaked in several areas and the losses have been subsequently retouched with oil paint. The impasto appears to be at times somewhat brittle, with some spots of flaking, most evidently in the orange sail on the left of the composition, in the pale pigments of the island in the upper right and in the dark blue pigments by the right vertical framing edge. Inspection under ultra-violet light reveals strokes of retouching in the upper part of the right framing edge, some spots in the coloured flags in the right edge and in the boat's sail to the left. The painting surface also appears at times uneven, uncovering some old restoration work which does not necessarily fluoresce when inspected under ultra-violet light.

This work is ready to hang.

Presented in a simple gilt frame.

A gift from the artist to the parents of Francis Bator; thence by descent

Haulisch Lenke, Vaszary, Budapest, 1978, no. 181 (an oil sketch for the present work illustrated)

Francis Bator was an influential White House economist, and founding chairman, director of studies and Littauer Professor of Political Economy at the Kennedy School of Government, Harvard University. An advisor to President Lyndon B. Johnson, he encouraged the administration towards a closer collaboration with Western Europe while reconciling with the Soviet Union and its Eastern European satellites. He also proposed federal policies and programs that were subsequently incorporated into president Johnson’s War on Poverty.

When Francis Bator left the White House in 1967, where his portfolio included monetary policy, tariffs and reducing nuclear proliferation, The Economist wrote: ‘On most of these matters most of the time, a thread of lucidity, consistency and balance has been traceable in the administrations’ handling, and Mr Bator has had a lot to do with it’.

Born in Hungary in 1925, Francis Bator fled to the USA with his family in 1939 in the face of encroaching fascism. At the time, his father Victor Bator (founder of the New York Bartok archives) was recognised as one of Hungary’s foremost legal minds in the field of international business and banking law. He and his wife Franciska (nee Sichermann) had acquired a substantial collection of modern Hungarian art, which they took with them, and which was later inherited by Francis and his brothers.

Painted circa 1930, the present work is from Vaszary’s best period, characterized by thick, contour lines, bright colours and diagonal perspectives.

Vaszary was an excellent colourist and his imaginative art, sensitive to modern trends, merits him an important place in the history of twentieth century Hungarian painting. Experimenting with a wide range of avant-garde artistic styles, from Art Nouveau to Fauvism and Post-Impressionism, it was from the 1920s that Vaszary started developing his distinctive style, inspired by the Ecole de Paris and notably Dufy, Matisse, Derain and Van Dongen.

Whether sketching a group of sailors in a moment of rest on the promenade, or a boat sailing off towards a faraway island, paintings such as the present work convey the joy, the freedom and the carefree state of mind of the Mediterranean way of life.