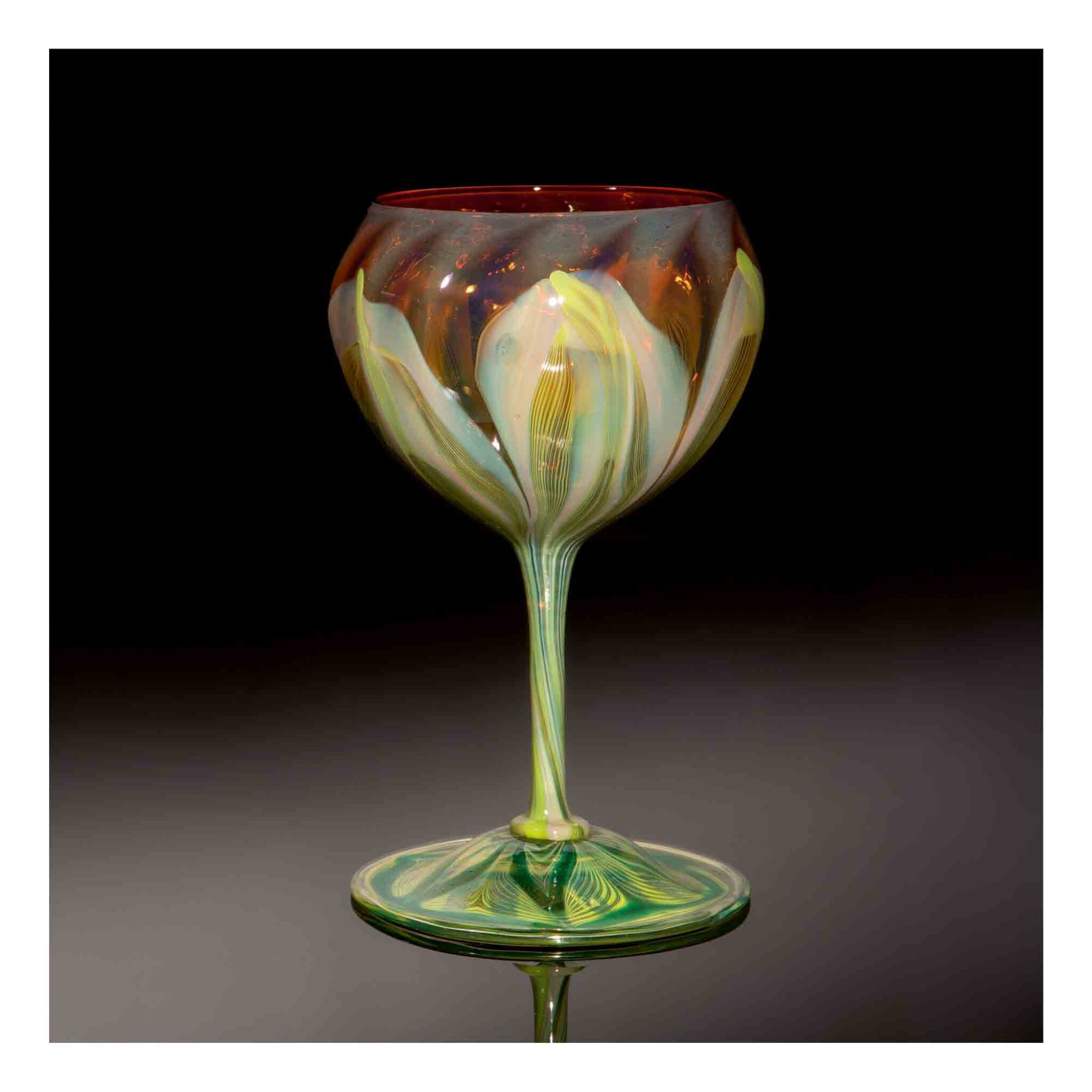 en suite with the previous lot

Overall in very good condition. Offered en suite with the previous lot, the goblet displays a rich palette of semi-transparent red, vibrant chartreuse and cool deep green decoration over a clear ground. The decoration throughout the coupe and foot is masterfully articulated in an abstract foliage motif. The glass with scattered minor air bubbles, particulate inclusions and surface irregularities inherent in the making and not visually distracting. The interior of the coupe with two slightly larger air bubbles which are open to the surface at the widest point of the coupe, inherent in the making and only visible upon close inspection. The glass with some scattered extremely minor and fine surface scratches consistent with age and gentle handling. An extremely elegant object that is impressively scaled and the perfect complement to lot 536, presenting an exciting opportunity to acquire two closely related early works by the firm.

﻿﻿﻿﻿﻿In response to your inquiry, we are pleased to provide you with a general report of the condition of the property described above. Since we are not professional conservators or restorers, we urge you to consult with a restorer or conservator of your choice who will be better able to provide a detailed, professional report. Prospective buyers should inspect each lot to satisfy themselves as to condition and must understand that any statement made by Sotheby's is merely a subjective qualified opinion.

Private Collection, circa 1950s
Acquired from the above by the present owner
Blown Favrile glass vases in the shape of flowers were among the earliest distinctive forms produced by the glasshouse founded by Louis Tiffany in 1893. His love of flowers, as well as Arthur Nash’s familiarity with similar vases being made at the time in his native England, were likely the major contributing factors. Under their guidance, Thomas Manderson, one of the company’s gaffers, developed the initial flowerforms and examples were displayed at the Tiffany Glass and Decorating Company’s first major exhibition of blown glass in 1894.

The initial attempts were ungainly, with thick, sometimes curved, stems supporting narrow bowls of swirled opaque glass. Within a year of their first appearance, however, flowerforms were at the forefront of a grouping described as “delightful in their simplicity, yet it is a graceful simplicity….They are the ever beautiful primaries of artistic shape.”

These two early examples, likely made on the same day by the same gaffer, clearly exhibit how quickly Tiffany’s glassworkers, through trial and error, mastered both the technique and the intrinsic decoration. While the earliest examples had flat circular bases, the design was soon transformed to a domed shape with a slightly folded rim. Most bases are undecorated, or have a very simple design of five small green petals. These bases, however, are wonderfully enhanced with ornate large green petals surrounded by lighter green scrollwork bordered in green. The ovoid bowls are mirror images of each other, with one having white petals outlined in lime green on a transparent red background and the other with red-outlined lime green flowers on an opalescent white background. Both bowls are of reactive glass, which is not unusual for Tiffany flowerforms. The red one, however, is of particular interest, and is perhaps unique, as it attempts to mimic the popular Amberina-type glassware introduced by the New England Glass Company in 1883.