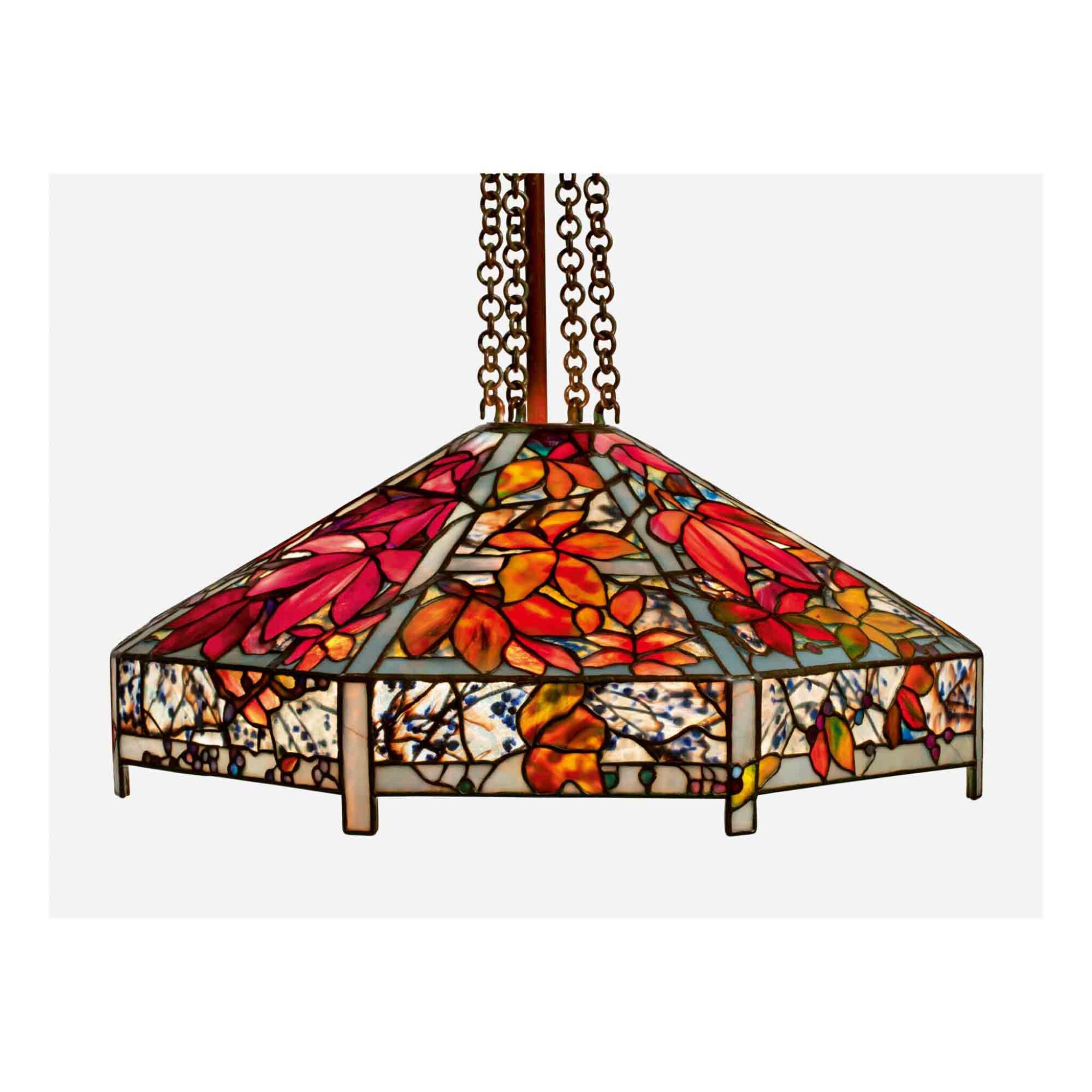 Overall in very good condition. This rare “Woodbine” shade is executed in a stunning and elaborate glass selection. The shade displays incredibly rich and variegated tones that emulate the peak of autumn foliage, including crimson, maroon, cherry red, rose, coral, salmon, cerise, mauve, rich browns, fiery orange, and golden amber. The red and orange woodbine leaves are accented with notes of violet, rich blue and green. The composition is punctuated by berries in a deep blue, violet and turquoise. Throughout the background glass of the shade mainly comprising the lower skirt, the effect of berry clusters is conveyed by cobalt spots over a misty white ground, which is inherent to the production of the glass. The overall effect is highly naturalistic and exuberant and represents a tour de force of the firm’s glass production and artistry. The shade with between 25 and 30 cracks dispersed throughout, stable. The vertical trellis segments in the skirt with some occasional minor bending, consistent with age and handling. Some of these tiles appear to have been sensitively releaded at some point in the history of the work in order to stabilize the bending. The hanging componentry, including the wheel and hooks, sockets, socket cluster, rod, ceiling canopy and chains appear to be later reproductions and are in very good condition with minimal wear. A superlative work with stunning glass and coloration.

Louis Comfort Tiffany’s knowledge of botany was extensive and he had a special affinity for flowering vines. Tiffany’s fondness for climbers was fully displayed in his landscaping of his two Oyster Bay summer homes, The Briars and Laurelton Hall. Samuel Howe, a former Tiffany Studios employee, wrote in 1906 about the former estate: “The creepers frame the openings, giving a charm and graceful unity to everything….What harmonizers! What decorative artists!...Always in style, exempt from even the dictation of Dame Fashion! Always mellowing, softening, harmonizing whithersoever they go.”

Throughout his artistic career, Tiffany featured wisteria, laburnum, clematis and trumpet creepers as decorative elements in a wide variety of mediums, ranging from wallpaper to windows to mosaics, but perhaps nowhere else as successfully as in the leaded glass lamp shades produced by his studios. The seemingly unpretentious woodbine would seem an unlikely candidate for such a treatment. The Virginia Creeper variety, a plant native to eastern North America, however, was renowned for turning from a lush green in the spring to brilliant flaming shades of red in autumn. For a colorist such as Tiffany, this aspect of the plant made it an ideal candidate to be transformed into something glorious.

The woodbine was translated into leaded glass lamp shades by the Tiffany Studios early in the company’s history. The plant was depicted in both 14- and 16-inch diameter models designed for table lamps. Those shades, while attractive, are not terribly exciting, with their geometric backgrounds and relatively stiff and mundane representation of the foliage. The same cannot be said for the outstanding hanging shade offered here. The octagonal chandelier is divided by eight blue-streaked opalescent white columns, each extending slightly below the lower border, and two matching horizontal bands that represent a trellis. This was a decorative device the company also employed in its nasturtium, clematis and grape hanging shades. Over this latticework are slender mahogany and chestnut-brown vines and masses of swirled and ruffled five-fingered Virginia Creeper leaves in all of their fall glory, some still with hints of yellow, apricot and green, but most in brilliant shades of red and scarlet tinged with violet and fuchsia. The plant’s inconspicuous clusters of flowers that appear in the spring change to purplish-blue berries in the fall and that magical transformation is beautifully depicted in glass, both in the lower leaded band of the shade as well as throughout the beige, peach and blue-streaked translucent ground.

The model was produced for only a short time, being discontinued by 1910, and this early example is supremely artistic. The overall palette is extraordinary and the contrast between the vividly colored leaves and berries against the opalescent white trellis and the unusual light background makes that even more apparent. This chandelier superlatively embodies Louis Tiffany’s ability to glorify any aspect of nature, even a plant as apparently unpretentious as a woodbine.