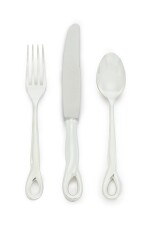 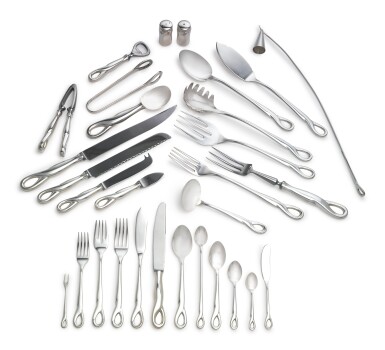 Most of the dinner knives with some rust stains to blades. Otherwise set in good, lightly used condition.

The Padova pattern is named for the Italian city where this design is crafted, and a number of pieces were designed specifically for Italian cuisine, such as the Parmesan cheese knife, pasta server, and fish servers. This set also contains many rare and difficult to find cutlery and serving pieces. While certain pieces are still available at Tiffany & Co., many are no longer produced. Tiffany currently retails only a five-piece place setting in this pattern, as well as a number of the serving pieces.

The consignor will be donating a portion of the proceeds to the Nando and Elsa Peretti Foundation, which was formed in 2000 by Elsa Peretti in memory of her father, Nando. The foundation has awarded grants to more than 1000 projects in 81 countries across the world, for an overall value of 50 million euros. Grant support has been provided in the following areas: environmental and biodiversity conservation; social inclusion and social welfare, including relief of poverty with a focus on elderly and children; education; promotion and protection of human rights and the rule of law; health, medical care and scientific research; and arts, culture or historical preservation.

A portion of the proceeds will be donated to the Peretti Foundation
AN AMERICAN SILVER PADOVA PATTERN FLATWARE SERVICE, DESIGNED BY ELSA PERETTI FOR TIFFANY & CO., NEW YORK, LATE 20TH CENTURY