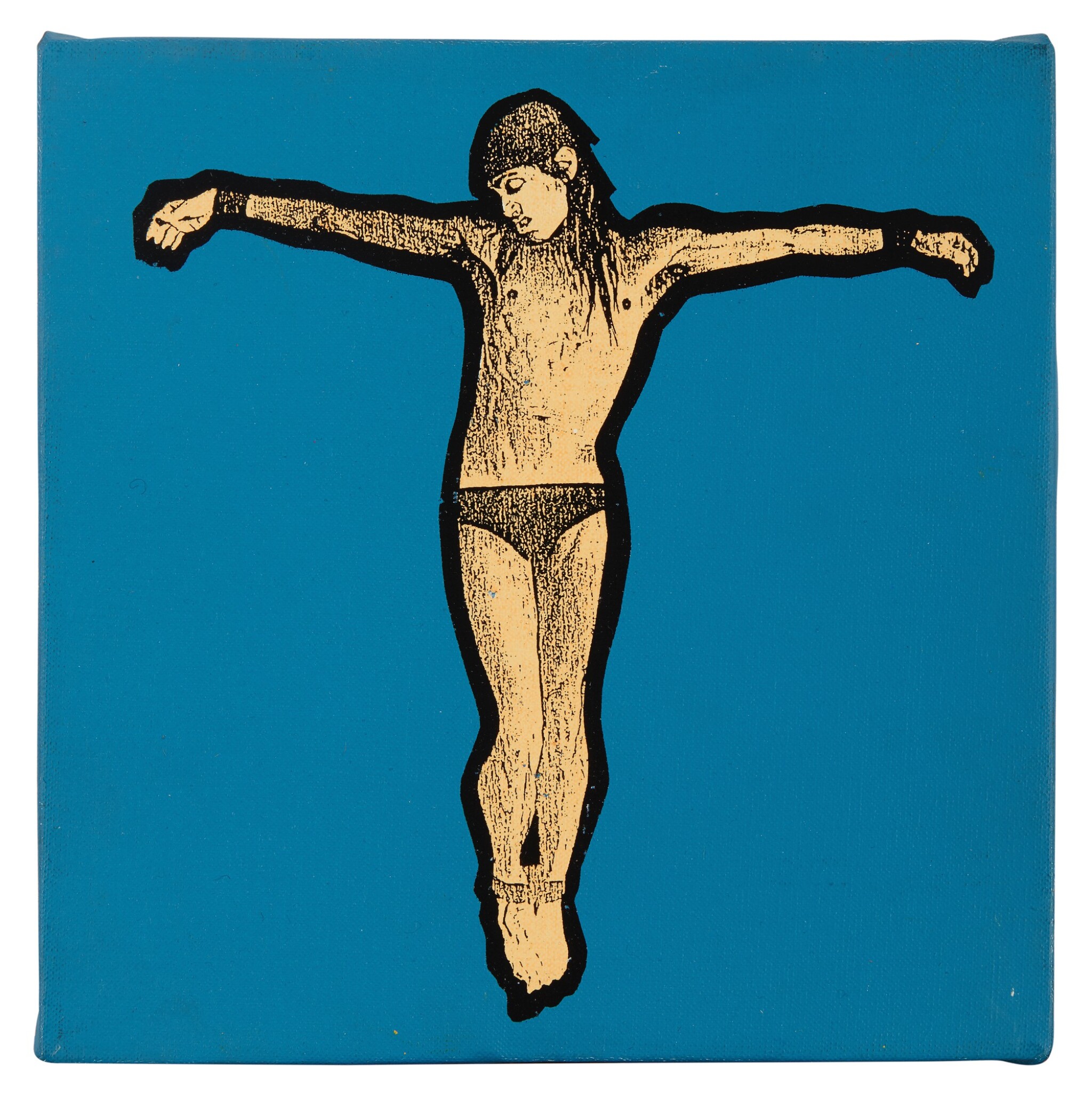 signed, dated 89 and inscribed Happy B-day Keith on the overlap

This work is in very good condition overall. There are textural variations to the surface of the work, inherent to the artist's working method and chosen media. There are a few pinpoint losses to the pigment and some very minor stable cracking along the lower left extreme edge, visible upon close inspection. Under ultraviolet light, there is no evidence of restoration. Unframed.

Estate of Keith Haring, New York (gift of the artist in 1989)

The Keith Haring Foundation (by bequest from the above in 1990)

Stephen Sprouse, perhaps best known as the precocious fashion designer who created the infamous Louis Vuitton graffiti logo bags with Marc Jacobs in 2000, is often referenced as one of the most influential and distinctive fashion visionaries of the 1980s. Sprouse’s “punk couture” shows bridged an unspoken gulf between New York’s uptown sophistication and downtown pop scene. While starting his career in fashion as a sketch artist in Halston’s studio, Sprouse met Andy Warhol and started experimenting with alternative media, including silkscreen, photography and collage. He received his first wave of attention in 1978 for designing the dress Debbie Harry wears in the music video for "Heart of Glass", which featured a photoprint of television static. In the late 70s and early 80s, Sprouse worked mainly as a visual artist, and soon became a fixture among the Club 57 scene.

Through Warhol, Sprouse became friends with Haring: "When I got to know Andy more, I got to know Keith more," he recalls. "I also collaborated with Keith. I got these images from the Bible, I painted them, then he put acetates over and did his thing, then we'd blow them up and silkscreen them on fabric” (the artist quoted in Charlie Porter, “American graffiti,” The Guardian, 8 September 2001, p. 57). This collaboration became the basis for Sprouse’s Fall 1988 “Signature” collection, featuring abstract graffiti prints of Jesus and Haring’s famous “squibbles” splashed across luxurious clothes of green velvet. Upon his death in 1987, Warhol was buried in a Stephen Sprouse suit.

The present work, Crucifixion, is palpably inspired by Sprouse’s relationship with Warhol, and that artist’s famed use of the silkscreen. Its image of Iggy Pop on the cross is reminiscent of the prints on which Sprouse and Haring collaborated, and became something of a trademark for Sprouse, appearing on large scale canvases, posters, and book covers. Small scale versions like the present example were most often given to Sprouse’s friends and collaborators as personal gifts.