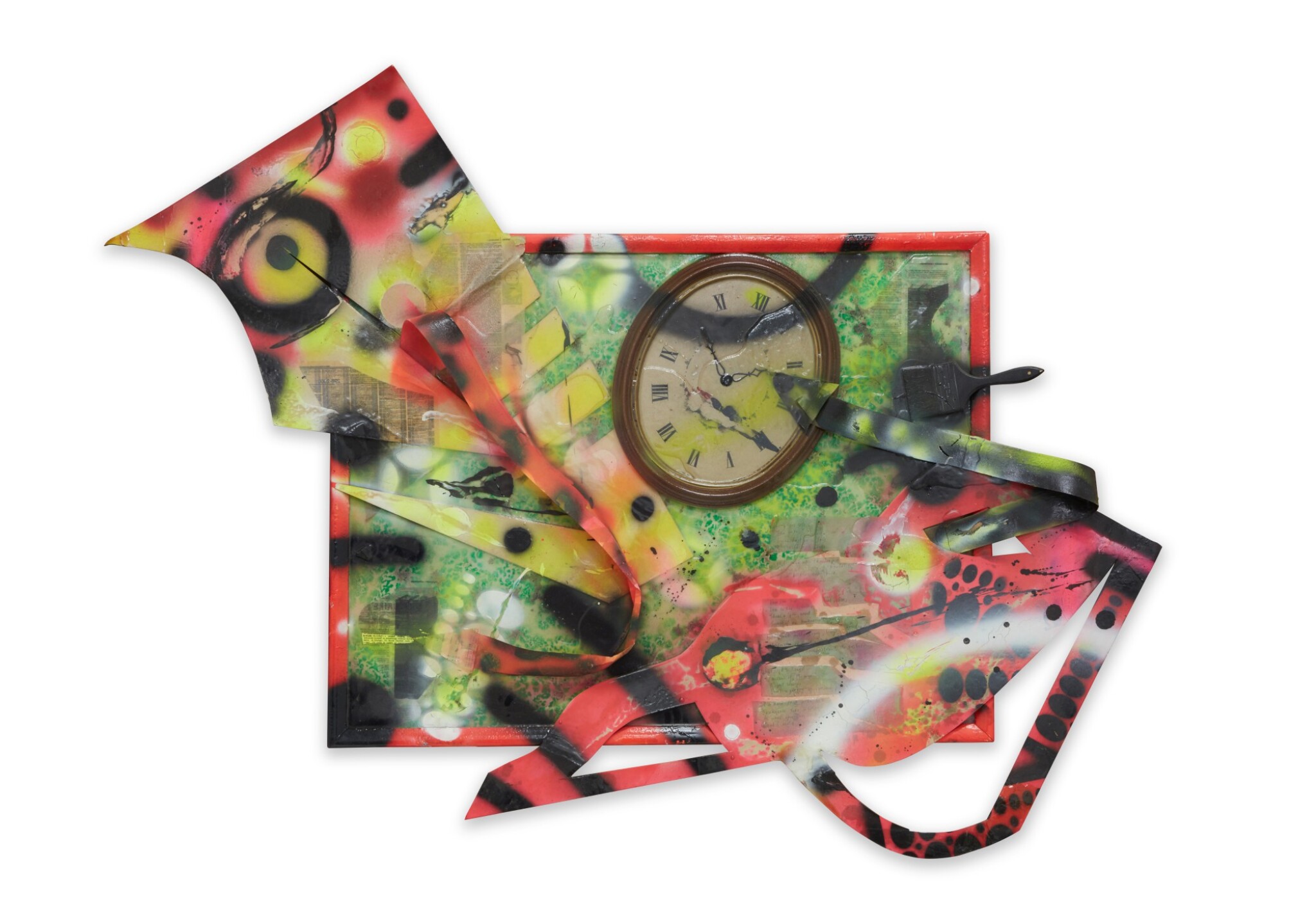 DEATH NOTE: INTRUDE THE PRELUDE - PAINT A TIME THAT CLOCKS OUT

Estate of Keith Haring, New York (acquired from the above in 1988)

The Keith Haring Foundation, New Jersey (by bequest from the above in 1990)

Rammellzee was a prominent figure in the New York Street Art scene in the 1980s alongside Basquiat and Keith Haring. The American artist is known for his graffiti and mixed-media sculptures, as well as a pioneer of early Hip Hop, recording Beat Bop with K-Rob in 1983. Rammellzee is known for his theory of Gothic Futurism, which contends that when liberated from linguistic structures, individual letters can be potent self-signifying enigmas. With spiky lettering, he describes a battle between letters and the standardization imposed by the rules of the alphabet. “The idea is to read this stuff, for humans to have something to read, not just blow them away”. Haring shared Rammellzee’s fascination of semiotics, the culturally constructed meaning of words and symbols. Haring purchased this work from Rammellzee’s one-man show at Barbara Braathen Gallery in 1988. As Braathen recounts:

“In 1988, Keith came to the opening of Rammellzee’s one-person exhibition at my gallery at 33 Bleecker Street.The show was of a series called Love Letters and Death Notes; there were fourteen works. It was a very crowded opening, but Keith carefully viewed all of the pieces, and decided to buy this one, informing me right then. I invoiced him, he paid for it, and at the end of the exhibition, it was delivered to his place (which was basically around the corner, on Broadway).

Although I will speculate here, I believe that Keith knew Rammellzee from the early 1980s, through the downtown nightclub scene, as well as the all-borough NYC graffiti scene. Rammellzee’s very important rap performance for Charlie Ahearn’s 1983 film Wild Style put him on the map of artistic influencers. Keith was completely woven into this culture, and would have been aware of and familiar with Rammellzee at least since then, if not before.

Keith recognized that Rammellzee was an important talent, and wanted to own a piece. Jean-Michel Basquiat also recognized him, producing the record “Beat Bop” with Rammellzee. Also note that Clemente did Rammellzee’s portrait which is in his large Guggenheim catalog of 2000.

At that time in the art scene of NYC, ‘everybody knew everybody,’ as they say!”