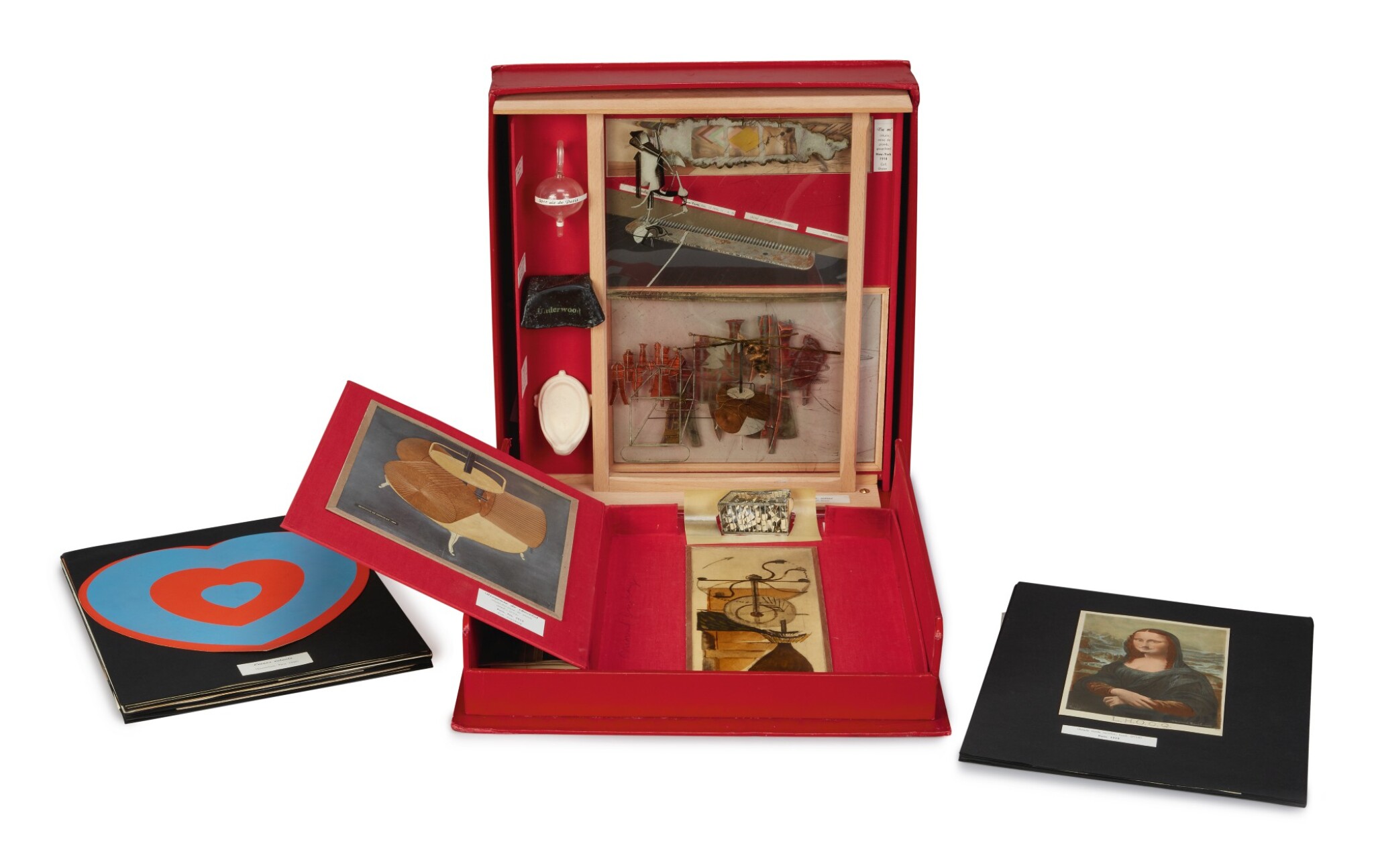 Miniature replicas and color and black-and-white reproductions of works by Duchamp contained in a red leather clamshell case (16 1/4 x 15 x 3 3/4 x 3 3/4 in.; 413 x 381 x 95 mm) lined in red buckram; many reproductions and printed labels have become detached from their black paper mounts (as per usual) due to evaporation of glue, wooden mounts also detached for same reason, but all present, leather case with some wear at extremities.

"Everything important that I have done can be put into a little suitcase."One of 75 copies, signed by Duchamp on the buckram lining, of Series F (1966) of the celebrated Boite-en Valise.

Duchamp first began working on his Box in a Valise in Paris in 1940. When the Germans occupied Paris, he smuggled the parts out of France and assembled the boxes in New York. Robert Lebel remarked, "Characteristically, one year before the war Duchamp foresaw that he must pack his bags in as small a space as possible." In the years 1941 to 1966, he was to issue seven versions of valise (Series A–G). Series F was made in Milan under the supervision of Arturo Schwarz and assembled in Paris by Jacqueline Matisse Monnier, This penultimate series was the last one to be issued during Duchamp's lifetime.

In a 1955 interview with James Johnson Sweeney, Duchamp elaborated on the idea behind the Box, "It was a new form of expression for me. Instead of painting something the idea was to reproduce the paintings that I loved so much in miniature. I didn't know how to do it. I thought of a book, but I didn't like that idea. The I thought of the idea of the box in which all my works would be mounted in a small museum, a portable museum, so to speak, and here it is in this valise."

Series F consists of the 68 reproductions and replicas found in the original Series A (1941–49) plus 12 additional reproductions.

The present copy is accompanied by a note from dealer Claude Givaudan of Geneva to Mr. Cruz, 2 May 1978, certifying that the box was acquired from Marcel Duchamp in 1967 and is complete.