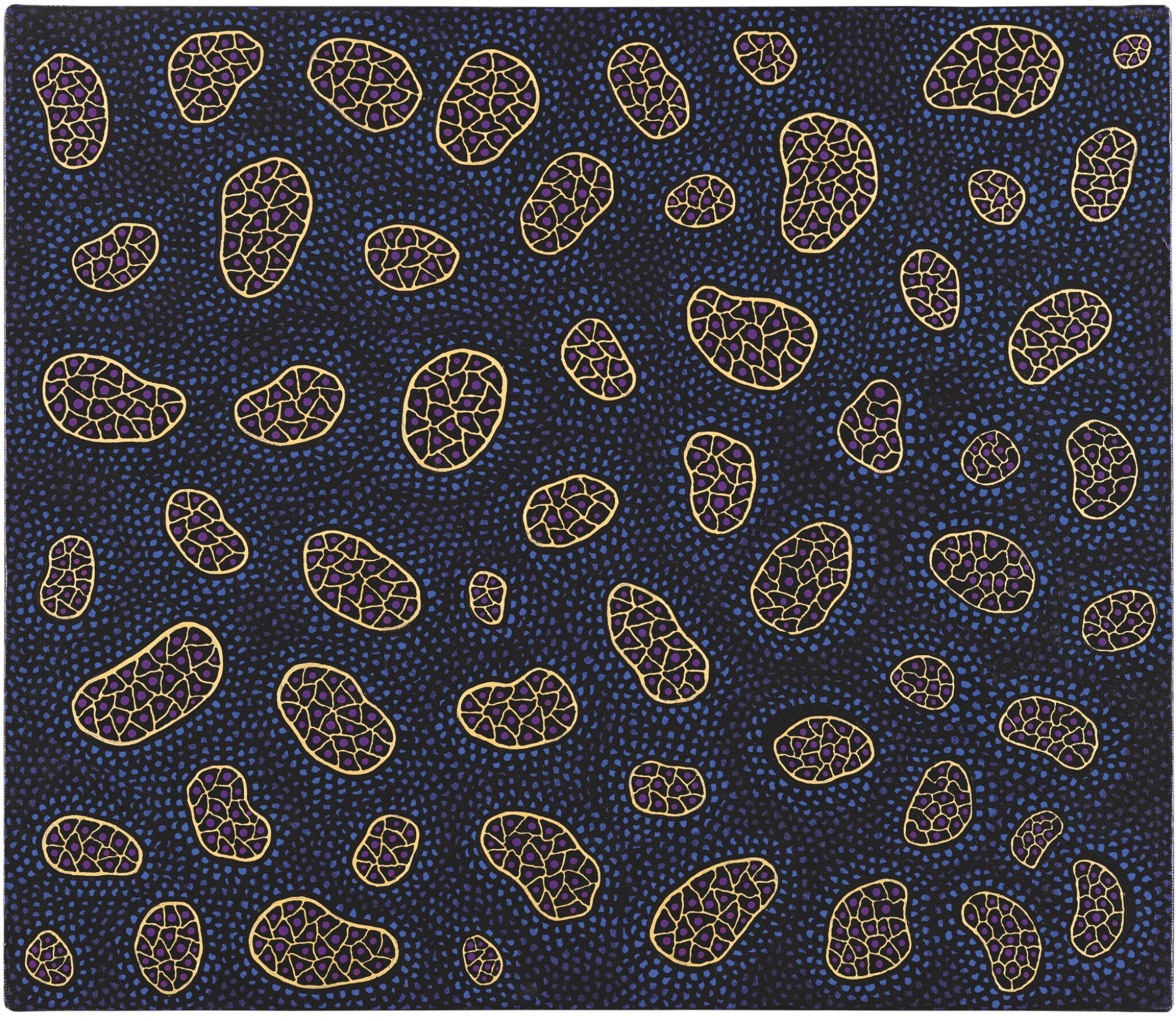 signed, titled in Japanese and dated 1993 on the reverse

This work is in very good condition. Extremely close inspection reveals some very slight wear to the extreme corners, and a minute and unobtrusive media accretion in the lower left quadrant. No restoration is apparent when examined under ultraviolet light.

Acquired from the above by the present owner in 1999

“Polka dots can’t stay alone, like the communicative life of people,” she has stated. “Two and three and more polka dots become movement. Our earth is only one polka dot among the million stars in the cosmos. Polka dots are a way to infinity.”

Executed in the unmistakable pattern of dots and expansive nets that permeates the life and work of Yayoi Kusama, Star from 1993 is a scintillating example of the Japanese artist’s iconic pictorial syntax. In vivid hues of indigo, violet and luminescent yellow against deep black brushtrokes, the composition seems to pulsate with a psychedelic and electric vibrancy. Its mesmeric pattern of biomorphic shapes and clustered polka-dots fills the canvas, forming a visually arresting image that exemplifies the decades-long career of an artist who has redefined the parameters of contemporary art. Composed in the same year that Kusama was invited to be the first solo artist and the first women ever to grace the Japanese Pavilion at the 45th Venice Biennale, the present work is testament to one of the most pivotal moments of the artist’s career. This exhibition marked Kusama’s return to the global stage and the beginning of an illustrious new chapter, which would earn her position as one of the most important living artists today.

Born in 1929, Kusama has produced a prolific and diverse oeuvre – spanning painting, sculpture and performance art – which has continued to evolve and expand with astonishing originality for more than half a century. Kusama first emerged as an artworld sensation in New York the early 1960s, alongside artists such as Andy Warhol and Donald Judd. Deeply concerned with the world around her, she has developed a practice that contemplates the interconnectivity between the universe and the lives of the people who inhabit it. This is articulated through the artist’s hallmark aesthetic of repeated dots, which seep across her canvases, sculptures and infinity rooms in a process she has termed ‘self-obliteration’.

Kusama’s renowned Infinity Nets offer a compelling manifestation of this entwining correlation between the elements of the world: “The sun, the moon, the earth and stars are also polka dots,” she explicates. “They cannot exist alone. Each and every one of us are polka dots. We gather and weave a beautiful pattern of polka dots” (Yayoi Kusama cited in: ‘Yayoi Kusama Answers the Proust Questionnaire’, Vanity Fair, 8 March 2019, online). In Star, the intricate nets and webs of her earlier paintings, composed of painstakingly rendered polka-dots, have metamorphosed into colourful spots, dots and biomorphic forms which appear to effervesce on the canvas with dynamic force. Glimmering like constellations in the night sky, they are evocative of the vast infinitude of the cosmos.

Diagnosed with an obsessional neurosis, Kusama has famously struggled with hallucinatory visions of infinitely oscillating, kaleidoscopic patterns since her earliest childhood in Japan. These hallucinations have fuelled her unique pictorial idiom throughout her career: “I was always standing at the centre of the obsession,” she recalls, “over the passionate accretion and repetition inside of me" (Yayoi Kusama cited in: Laura Hoptman, Yayoi Kusama, London 2000, p. 103). Her method of working requires a focus that is at once compulsive and meditative: entirely transfixed, she labours for hours, cathartically translating her inner visions from mind to canvas. The result, as the present work wholly exemplifies, is a transcendent creation that potently shifts from private experience to universal significance. As the artist has proclaimed, “My love for humanity and for the world has always been the driving force and energy behind all that I do” (Yayoi Kusama in conversation with Rosanna Greenstreet, The Guardian, 21 May 2016, online).