PROPERTY FROM THE DISTINGUISHED COLLECTION OF ROSE ISSA, LONDON 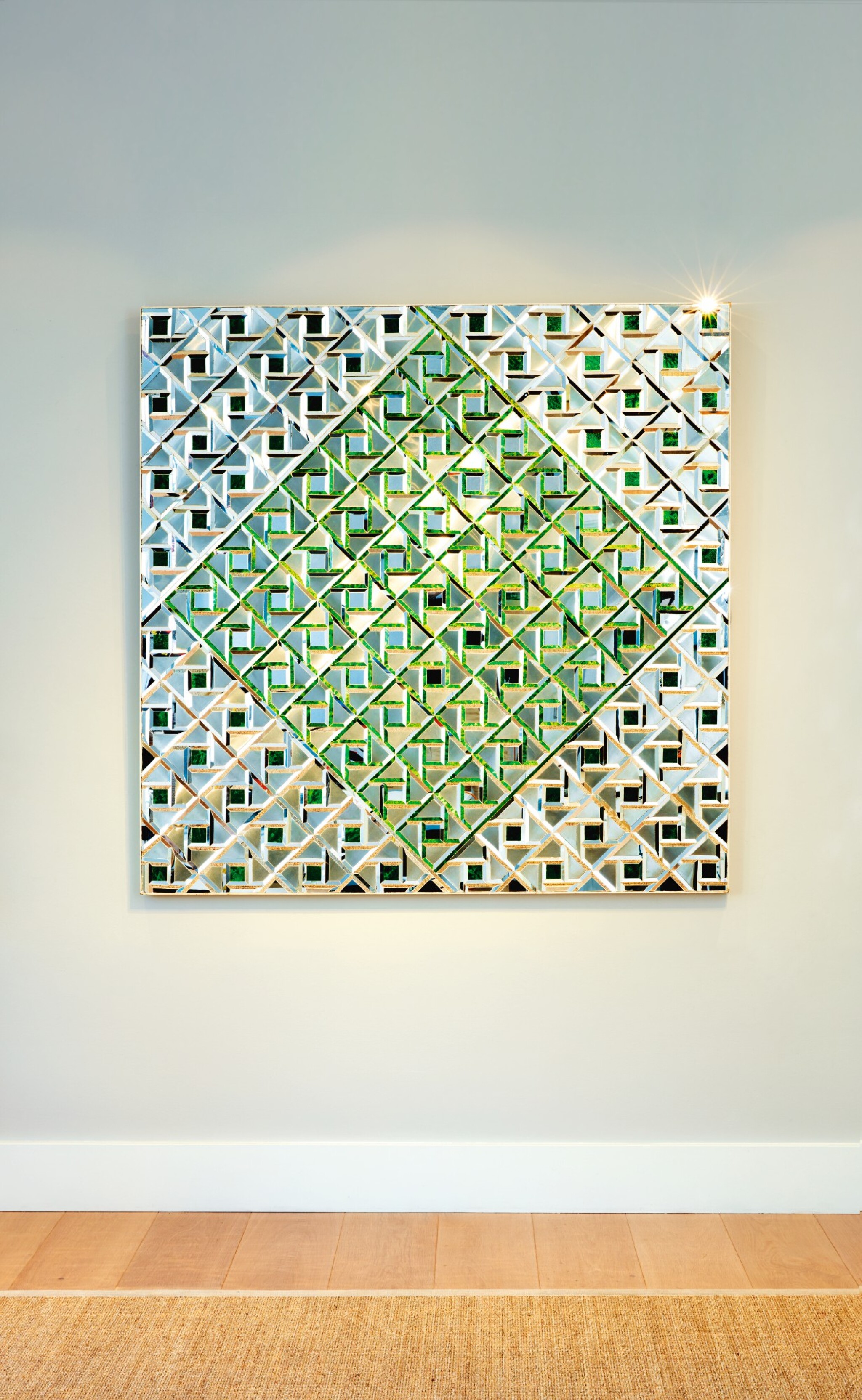 PROPERTY FROM THE DISTINGUISHED COLLECTION OF ROSE ISSA, LONDON

Property from the Distinguished Collection of Rose Issa, London

Acquired directly from the artist by the present owner in 2004

Geometry of Hope is a prime exemplar of Monir Farmanfarmain’s inimitable cross-cultural style. The work was included in the artist’s landmark exhibition at the Solomon R. Guggenheim museum in 2015 and can be seen to emblematise the complexity of Farmanfarmain’s oeuvre whose work was both modern and traditional; who existed at the forefront of the international avant-garde and yet created work founded in the craft mores of her homeland. This dazzling art work recalls the words of Frank Stella: “Monir chose to make art from the imagery that surrounded her everyday life in Iran, and, just as importantly, she chose to make art with those artisans who have for centuries striven with their gift of ornament to beat back the desert blindness, the blank expression of nature. In Monir’s mirrored geometries we recognise a subtle self-defense, and we step aside to allow nature to confront its unknowable empty self (Frank Stella, ‘A Reflection’ in Hans Ulrich Obrist, Karen Marta, Ed., Monir Shahroudy Farmanfarmaian, Cosmic Geometry, Dubai 2011, p. 65).

In 1975, the year of the creation of the present work, Farmanfarmaian experienced an artistic epiphany. On a tour of her native Iran with American minimalists Robert Morris and Marcia Hafif, she visited the Shah Cheragh, a mosque in Shiraz whose interior is tessellated in a mosaic of tiny mirrored squares, triangles, and hexagons. The artist was struck: “The very space seemed on fire, the lamps blazing in hundreds of thousands of reflection… It was a universe unto itself, architecture transformed into performance, all movement and fluid light, all solids fractured and dissolved in brilliance in space, in prayer. I was overwhelmed.” (The artist cited in: Ariella Budick, ‘Where Prayer Hall meets Disco Ball’, Financial Times, 10 April 2015, online). This was a watershed moment for Monir’s practice: the moment upon which she embarked upon he mirrored series, of which the present work is a paradigmatic example. She collaborated with the artisan Hajj Ostad Mohammad Navid, who was well versed in the synthesis of cut mirrors, matt plaster, and painted glass, and for four years created works of dense conceptual content, and dazzling geometric aesthetic. Geometry of Hope shows how this mix could imbue artworks with a mood that combined the gaudiness of the ‘70s disco movement with the transcendental wonder of religious architecture. Monir’s works “spring from wells of minimalism and classical Persian mosaic. They merge time-honoured folk practice with the avant-garde cult of the bracingly new and the drug-induced nirvana. Warhol visited Tehran in 1976 and she presented him with a faceted reflective orb called ‘Mirror Ball’ which looks as though it could have been spinning on the ceiling at a 1970s bar mitzvah” (Ibid.)

Monir Farmanfarmaian was friendly with Warhol, as she was with Milton Avery, Louise Nevelson, Mark Rothko, and Willem de Kooning. She had lived in New York for twelve years in the immediate post-war years and maintainted close relations with many of its most important artistic practitioners. Thus, in the present work, we can observe as much influence from contemporary artists as we can from traditional Persian sources. Frank Stella provides an obvious counterpoint: his early paintings were similarly founded in geometric abstraction, and in the 1970s he turned towards a similar brand of refined gaudiness – deploying high-key colours and reflective surfaces into wall-mounted artworks that hovered between painting and sculpture. In the contemporaneous use of the mirrored surface, we are also reminded of the work of Michelangelo Pistoletto. Pistoletto was the pioneer of using mirrors and reflection to tie the viewer into the artworks. Throughout art history, the painting had acted as a pseudo-window, through which the viewer would view an illusory realm beyond. Pistoletto and Monir Farmanfarmaian inverted this concept and charged the gallery space with compositional import. Up to this point, paintings had been snapshots of the moment they had been created. Pistoletto and Farmanfarmaian created works that exist forever in the present, changing every time that they are viewed. As the artist’s grandson observed: “She arrives at her high math through pure aesthetics. Meditating on her work is like taking a shortcut to infinity” (Aziz Isham cited in, Hans Ulrich Obrist, Karen Marta, op. cit., p. 147).