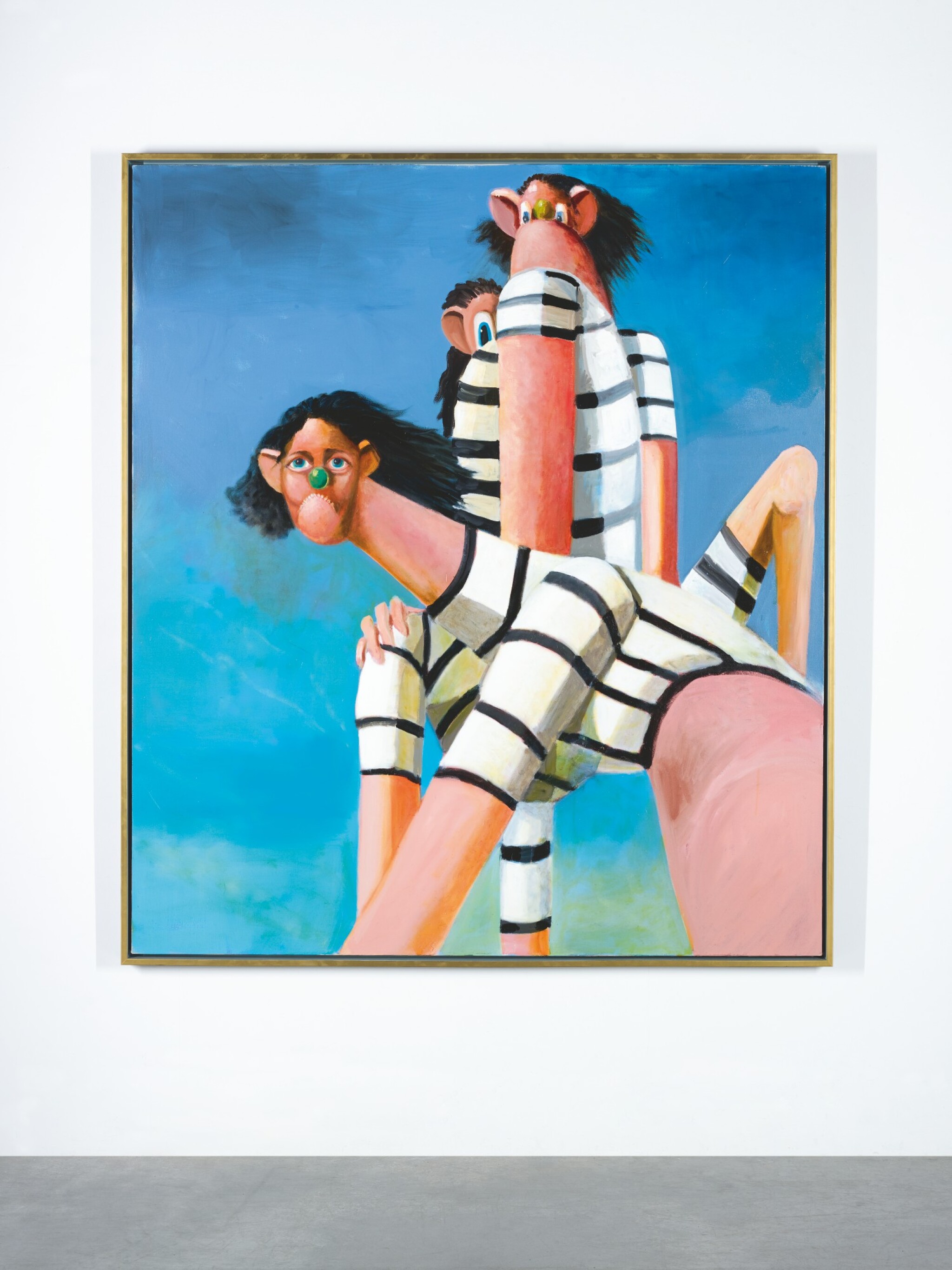 Powerful in its colossal magnitude, George Condo’s Antipodal Reunion is a definitive example of the artist’s stylistic construct of artificial realism, through which he has expanded the traditional realm of figurative painting to portray the often-humorous idiosyncrasies of contemporary life. This work is a brilliant example of the artist’s rebuttal of the classical tradition, presenting quasi-human figures that fuse elements of European Old Master paintings to popular American culture.

Across his oeuvre, Condo draws from a wealth of sources spanning the Renaissance and Baroque periods through to the Surrealist and Cubist movements, alongside contemporary comics and cartoons. Assimilating these various influences into a seamless amalgamation of genius, Condo produces paintings which simultaneously allude to and evade art historical context. The result is a pantheon of work that is at once strange and familiar. Encapsulating his transmutable style, the artist has explained: “In the beginning I took fragments of architecture to create a person, now I take a person and fragment them to make architecture” (George Condo cited in: Laura Hoptman, ‘Abstraction as a State of Mind’ in: Exh. Cat., New York, New Museum, George Condo: Mental States, New York, 2011, p. 24).

Following a nine-month stint as the diamond duster in Andy Warhol’s renowned Factory, Condo emerged onto the 1980s New York art scene as a young wiper-snapper of twenty-three alongside seminal figures such as Keith Haring and Jean-Michel Basquiat, the latter of whom is stated to have persuaded Condo to pursue a career as a professional artist. Like Haring and Basquiat, Condo was critically engaged throughout the eighties in the inauguration of a new form of figurative painting that stylistically blended the representational and the abstract. By 1996, Condo had begun to expand his vision beyond the classically seated portrait bust to explore a full frame incorporating many-figured compositions from multiple perspectives. Condo’s experimental and fragmented subjects became distinguished by their ballooning cheeks and bulbus noses, tumescent chins and globular eyes.

There is a clear dialogue with the work of Pablo Picasso in Condo’s practice. In style, technique and composition, Antipodal Reunion is a prime example of the artist adopting the great master’s style. Studying Picasso’s work as a young painter living in Paris in the late 1980s and early 1990s, Condo absorbed much of Picasso’s pictorial syntax. Underlying both artists’ careers is a persistent reinvestigation into the possibilities of the genre of portraiture. Indeed, much like Picasso in his time, Condo has sought to transform and reinvigorate portrait painting throughout his career. For both, this confrontation was not a process of destruction, but rather one of celebration, reverence and progression. Within the conventionally established parameters of classical portraiture, these artists innovated from the inside out.

Antipodal Reunion bears a striking similarity to Picasso’s 1918 work Bathers, which depicts a group of women languishing on the sand, as the deep colours of the ocean behind them reflect harmoniously with the subtle sky. Condo, using the Victorian bathing suit as a key influence, has re-worked the original imagery into a simultaneously humorous and unsettling composition, highlighting the women’s comically elongated limbs that traverse the length of the canvas. In contrast to Picasso’s deeply romanticised setting, Condo’s subjects are depicted against a surrealistic block of colour suggestive of an azure blue sky. While Picasso’s cubist portraits of his muses and mistresses simultaneously show various facets of their facial features on a single two-dimensional plane, Condo reapplies the technique of analytical cubism to his own paintings, showing different and often conflicting psychological states.

Assuming an almost primitive posture, the central character of Antipodal Reunion gazes out towards the viewer with an ambivalent air. With her elongated neck, distorted face displaying a row of small teeth, and a green, clown-like nose, she appears to be protecting the shy and hesitant figures behind her. Despite their grotesque and distended forms, Condo’s characters are imbued with a sense of ineffable pathos. As curator Ralph Rugoff notes, “Unlike in caricature… the preposterous features of these figures are in fact rendered with great sympathy. Drawing on the traditional rhetoric of portraiture, Condo imbues his invented subjects with a compelling psychological presence” (Ralph Rugoff, ‘The Mental States of America’ in: Exh. Cat., London, Hayward Gallery, George Condo: Mental States, 2011-2012, p. 16).

Antipodal Reunion offers an impressive archetype of Condo’s well established and self-coined term ‘artificial realism’. Throughout his practice, Condo has mined the formal possibilities of art historical tropes to push the boundaries and defy expectations for both painting and portraiture in a contemporary environment. Building upon years of refining and maturing an iconic figurative style, Condo’s Antipodal Reunion is a work of dramatic intensity, at once utterly uninhibited and full of instinctive acumen.