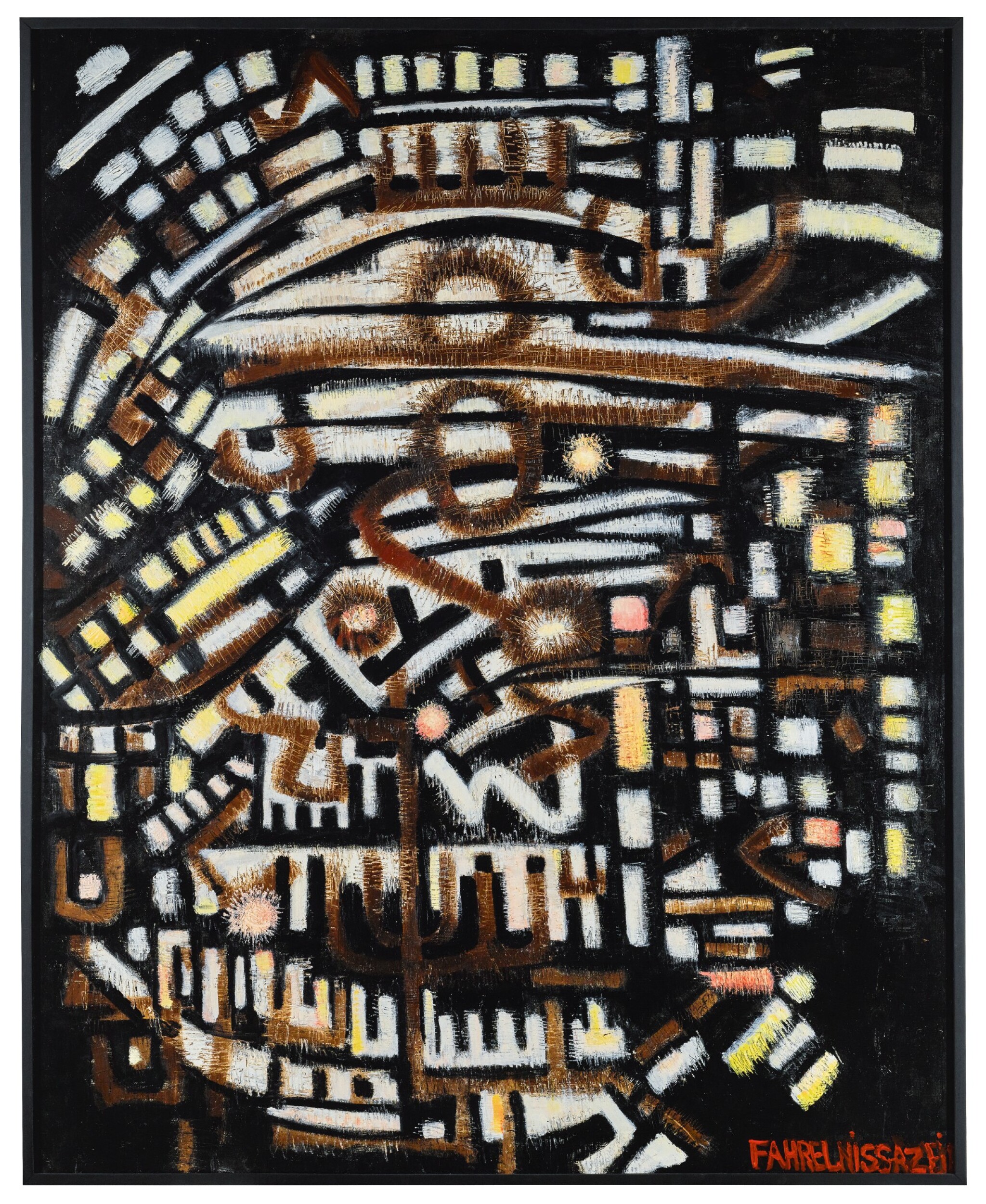 This work is in very good condition. There are four pin holes along the upper edge, which are inherent to the artists working practice. Inspection under ultraviolet light reveals some spots of retouching, most notably at the upper centre. Further inspection under ultraviolet light reveals some minor restoration in the lower centre and at the lower edge.

Fahrelnissa Zeid (1901-1991) cemented her reputation in the global art world as an artist of considerable talent, depth, discipline and dynamism. Born into a family of intellectuals in 1901, Fahrelnissa Zeid was brought up in Istanbul during the reign of the Ottoman Empire.

Everything Fahrelnissa did in her life was groundbreaking for a woman and a female artist of her period. She was one of the first female students to attend the Imperial School of Art in Istanbul in 1919. In 1928, she studied briefly under Roger Bissière at Academie Ranson in Paris, a free art academy that was part of the Nabis movement which would have a profound effect on her art and of which Tamara da Lempicka was a fellow graduate of. She would also meet “many vanguard artists during her time there, including Tsuguharu Foujita and Kees van Dongen.” (Dr. Adila Laïdi-Hanieh, Fahrelnissa Zeid Painter of Inner Worlds, London, 2017, p. 39).

Fahrelnissa’s paintings between 1920 and mid-1940s were mostly stunningly vibrant and arresting scenes from her daily life, travels and dreams memories, showing similarities with her favourite artists such as Pieter Brueghel the Elder and the colourful canvases of the Nabis like Pierre Bonnard. From 1950s onwards, Fahrelnissa’s works increasingly became more abstract. However, whatever may be the content of her paintings, as Necmi Sonmez put it, “she was concentrating all her attentive powers on an investigation of the problem of colour…”(Necmi Sonmez, ‘The World of Fahr El Nissa’s Art as a Model of Liberation’ in: Exhibition Catalogue, Istanbul, Cemal Resit Rey Sergi Salonu, Fahrelnissa Zeid, November 1994, p. 31). And achieving depth and otherworldly and transcendental compositions through various applications of colour was what she would master in the next fifty years of her artistic career.

Fahrelnissa’s second marriage to H.R.H. Prince Emir Zeid Al-Hussein in 1934 incited a completely new chapter in her future career. In 1941, Fahrelnissa was introduced to the contemporary art scene in Istanbul previously unknown to her. Her encounters led her to exhibit alongside the newly formed D-Group - which would champion Cubism and Constructivism - as one of only two female painters within this ensemble of artists. However, Fahrelnissa’s exposure to the contemporary art trends through her years in Europe and her free reigning will and style set her apart from any movement of the period. Fahrelnissa and Prince Zeid Al-Hussein moved to Berlin and after a short stay in Baghdad, the couple moved to London in 1946 when Prince Zeid Al-Hussein was appointed as the first Iraqi ambassador to the United Kingdom. The 1940s and 1950s would mark a pivotal new era in Fahrelnissa’s career and artistic output. While working endlessly and having solo and group shows at Gimpel Fils and St George Gallery from late 1940s onwards including a show at Lord’s Gallery in 1957 comprising of works by Jean Tinguely, Naum Gabo, Man Ray, Ben Nicholson, Jean-Paul Riopelle and Morandi and Fahrelnissa’s monumental kaleidoscopic painting, Towards a Sky (sold at Sotheby’s London, 2017); she would throw lavish parties at their ambassadorial home hosting leading artists, critics and curators of the period surrounded by sculptures by Henry Moore, Cesar and Lynn Chadwick from her collection alongside her own paintings decorating the walls. According to Sarah Wilson, Towards a Sky and Fahrelnissa’s other large scale paintings “would remain unrivalled in their ambitious scale by any woman artist until Joan Mitchell and her 1960s triptychs, made in Giverny.” (Sarah Wilson cited in: ‘Extravagant Reinventions: Fahrelnissa Zeid in Paris’, Exh. Cat., London, Tate Modern, FAHRELNISSSA ZEID, 2017, p. 89).

In late 1950s, Paris was in her calling once again. After renting a studio there, she started dividing her time between the two artistic capitals, London and Paris and immersed herself in their respective art scenes. She was showing with the Russian Serge Poliakoff, the German émigré Hans Hartung as well as the Cubist Frances Picabia before his death in 1953. “Her profile as an artist and connections in Paris allowed her to meet her idol Henri Matisse;...to exhibit alone in Brussels and Zurich; to become friends with the Surrealist leader André Breton; and to show work alongside such greats as ... Marc Chagall.” (Dr. Adila Laïdi-Hanieh, Fahrelnissa Zeid Painter of Inner Worlds, London, 2017, p. 141).

It is well known and widely written how highly she was considered by the galleries, dealers and collectors of her time. In 1954, Fahrelnissa’s exhibition at Dina Vierny’s Gallery from 1953 would travel almost unchanged to London’s Institute of Contemporary Arts for her solo show at London’s most avant-garde space which was founded in 1946. Fahrelnissa was the first female artist and the only one to exhibit at the ICA for many years to come. Dr. Adila Laïdi-Hanieh noted, “She was in esteemed company: her show immediately followed one by Georges Braque and preceded Francis Bacon’s first solo exhibition in a UK institution.” (Dr. Adila Laïdi-Hanieh, Fahrelnissa Zeid Painter of Inner Worlds, London, 2017, p. 126).

A fate changing moment came when Fahrelnissa was introduced to Charles Estienne in 1949, the legendary and influential curator and art critic who championed Nouvelle École de Paris and the lyrical abstract movement and who went onto discover lyrical-abstract painters Nicolas de Staël, Serge Poliakoff and Pierre Soulages. Fahrelnissa was also a regular at the Salon des Réalités Nouvelles exhibitions between 1951 and 1954. They were held at Musée d’art Moderne de la Ville in Paris, today’s Palais de Tokyo and Fahrelnissa’s grandiose and colourful paintings would be hung alongside works by the leading contemporaries of the period including Jean Arp, Victor Vasarely and Fernand Léger throughout the annual exhibitions.

In 1958, due to the shocking and disheartening massacre of Prince Emir bin Zeid’s family and the overthrow of the Hashemite monarchy in Iraq, Fahrelnissa and the Prince had to move out of the Ambassadorial home in London and to a new house in Holland Park. From then onwards until the passing of Prince Emir Zeid in 1970, they would split their time between London and Paris with summers spent in Ischia, Italy before Fahrelnissa moved to Amman in the early 1970s where she continued to paint and simultaneously teach art. Dr. Adila Laïdi-Hanieh who wrote the most comprehensive biography on the artist in 2017 explains: “Her painting evolved as she started to work more frequently in Ischia, and she produced works that were completely different in colouring and composition than everything that had come before...There was a feeling. That it was a time for reflecting on all her artistic achievements to date.” (Dr. Adila Laïdi-Hanieh, Fahrelnissa Zeid Painter of Inner Worlds, London, 2017, p. 213).

One of these black-and-white canvases was Lunar Chiarascuro painted by the artist in 1965 during her time in Ischia and which was also featured on the public poster of the exhibition across Paris. The exhibition at Galerie Katia Granoff in 1969 coincided with the year of the man's first landing on the moon which was both coincidental and fortunate in the sense that Fahrelnissa was always fascinated by the magical astronomical phenomenons, the moon, the astral, the cosmos and the stars and had been painting a great number of works with titles and compositions referencing these themes as early as the late-1940s. Thus, this work is a beautiful abstract study of the moon and its ensuing play between light and dark. Painted in Fahrelnissa's celebrated unique style of the period where the chisels she made with her palette knife are visible; this work is a beautiful abstract study of the moon and its ensuing play between light and dark as if the moon imbues its shimmery bright yellow light upon a city with its numerous skyscrapers and multiple grids of houses against a bi-chromatic layout with strong and bold contrasts in order to achieve a more enhanced three dimensionality and depth. The geometric motifs that are discernible on Lunar Chiarascuro can also be seen in Fahrelnissa’s lithographs from the 1950s as well as on the dress the artist depicted herself with in the magnificent self-portrait she painted in 1980 entitled Someone from the Past (Self-Portrait). She was quoted as saying that she was thinking of astrology, the moon and the stars when she created these motifs back in the 1950s which she then carried on referring to in a number of her works from the 1960s and 1970s. For an artist who is championed for her mastery of colour, Lunar Chiarascuro is exceptionally important within the artist's oeuvre as it is among three paintings by the artist in a dominantly black-and-white colour scheme and is a testament to her mastery in creating the most arresting compositions without always resorting to vibrant tonalities. The smaller of these dominantly black-and-white paintings is currently in the Collection of Darat Al Funun in Amman, Jordan; a monumental one titled Fight of the Moon and Astronaut / Intruder (1965) is on view at Mathaf: Arab Museum of Modern Art in Doha, Qatar and the third one is Lunar Chiarascuro.

Fahrelnissa had a long and colourful life, living until the age of 90. Lunar Chiarascuro was painted when the artist was already in her late 60s. An artist who constantly renewed and reinvented herself and her art, Lunar Chiarascuro is a testament to the joys and torments of an inner world and the outer forces as Fahrelnissa’s art has always been a reflection of her unique personality. Unseen on the market since 1969 and bringing together her Eastern origins with her Western upbringing, the present lot is a rare work by one of the most innovative and daring artists of the period, and is a collector’s item at its best.

Two retrospectives on Fahrelnissa were organised by her daughter, Shirin Devrim at the Fine Arts Academy in Istanbul in May 1964 and the Hittite Museum in Ankara in June 1964 and later on in 1990, her works were brought together in new retrospectives at the Institut du Monde Arabe, Paris and the Neue Gallerie (Sammlung Ludwig) in Aachen in 1990. A large selection of Fahrelnissa’s works were exhibited at the 12th Sharjah Biennial in 2015 and at the 14th Istanbul Biennial the same year. In 2017, Tate Modern held a major retrospective on the artist's oeuvre, while also acquiring a major work by the artist for their Permanent Collection and the retrospective then travelled onto Deutsche Bank Kunsthalle in Berlin.