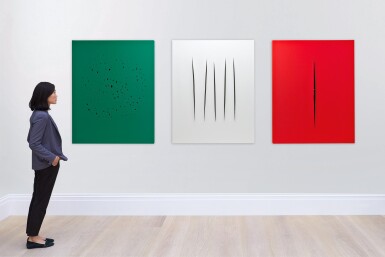 Executed in 2006, this work of three unique variants.

This work is in very good condition. Very close inspection reveals a few unobtrusive media accretions in isolated places throughout. Further very close inspection reveals two minute specks of loss on the red canvas: one at the upper left corner tip and one at the lower right corner tip. There is a fine network of craquelure throughout the white canvas, with some fine tension cracks along each extreme edge. No restoration is apparent when examined under ultra violet light.

Massimo De Carlo, Milan
Acquired from the above by the present owner

Executed in vibrant hues of emerald green, stark white and crimson, Italian Treasures pays homage to the modern master, Lucio Fontana. The Scandinavian duo Michael Elmgreen and Ingar Dragset mimic Fontana’s tell-tale tagli (cuts) and buchi (holes) which characterize his Concetto Spaziale series from the mid-1950s onwards. In doing so, the pair seem to propose Fontana as their artistic antecedent within art history as they redefine his conceptual theories for the contemporary age. Indeed, Elmgreen has stated “we read books and theory, and, of course, we are interested in the academic context of our work” (Rajesh Punj, ‘No Fear: A Conversation with Elmgreen & Dragset’, Sculpture Magazine, 12 September 2019, online). The title of Italian Treasures refers to the work’s resemblance to the Italian flag and Fontana’s nationality, suggesting that Fontana himself is a national treasure. However, the title also uses humorous wordplay (as many titles by Elmgreen and Dragset do), subtly hinting at the combination locks hidden behind slashes in the canvas and the treasures they may conceal.

Based in London and Berlin, Elmgreen and Dragset have worked as a collaborative duo since the mid-1990s. Neither has been formally trained in art, and as such, they consider themselves as outsiders in the artworld – a perspective that allows them to critique it more readily than others who have been formally trained in its institutions. Their first work together, a performance in which the pair painted a gallery space for 12 hours with 300 litres of white paint before washing it off with a power hose, questioned the very foundation of a white cube as a neutral exhibition space. Their aim was to provoke a response rather than create a tangible work of art, a principle which has defined their art practice ever since.

Much like Fontana, Elmgreen and Dragset’s artistic practice largely works within a minimalist visual vocabulary that seems to challenge the sterilizing force of the white cube space. The Arte Povera movement of 1967, with which Fontana associated, was also predicated on disrupting and challenging the values of the commercialized gallery system by using alternative mediums. Coined by art critic and curator Germano Celant in 1967, Arte Povera remained popular well into the 1970s and was the Italian contribution to conceptual art.

Fontana’s Concetto Spaziale played with the notion of the canvas as a two-dimensional plane by puncturing its surface and drawing attention to its three-dimensionality. Fontana referred to the space behind the canvas a “free space.” This is as much a philosophical concept as a visual one, for as Fontana told Tommaso Trini shortly before his death: “art is only thought in evolution” (Sarah Whitfield, Exh. Cat., London, Hayward Gallery, Lucio Fontana, 1999, p. 14). The space created by the hole or the slash stands for the idea of a space without physical boundaries. In essence, Fontana aimed to question reality and accepted convention through his art. In this Elmgreen and Dragset continue to follow his example in their craving for expanding the truth. According to Fontana, the artist's work should aspire to enlighten ordinary people to the possibilities offered by their environment and society. Preoccupied with objects and their settings, along with the discourse that can arise when those objects are radically recontextualized, Elmgreen and Dragset push against the normal modes for the display of art and invite their audience to question, taking up the torch ignited by Fontana so many decades before.