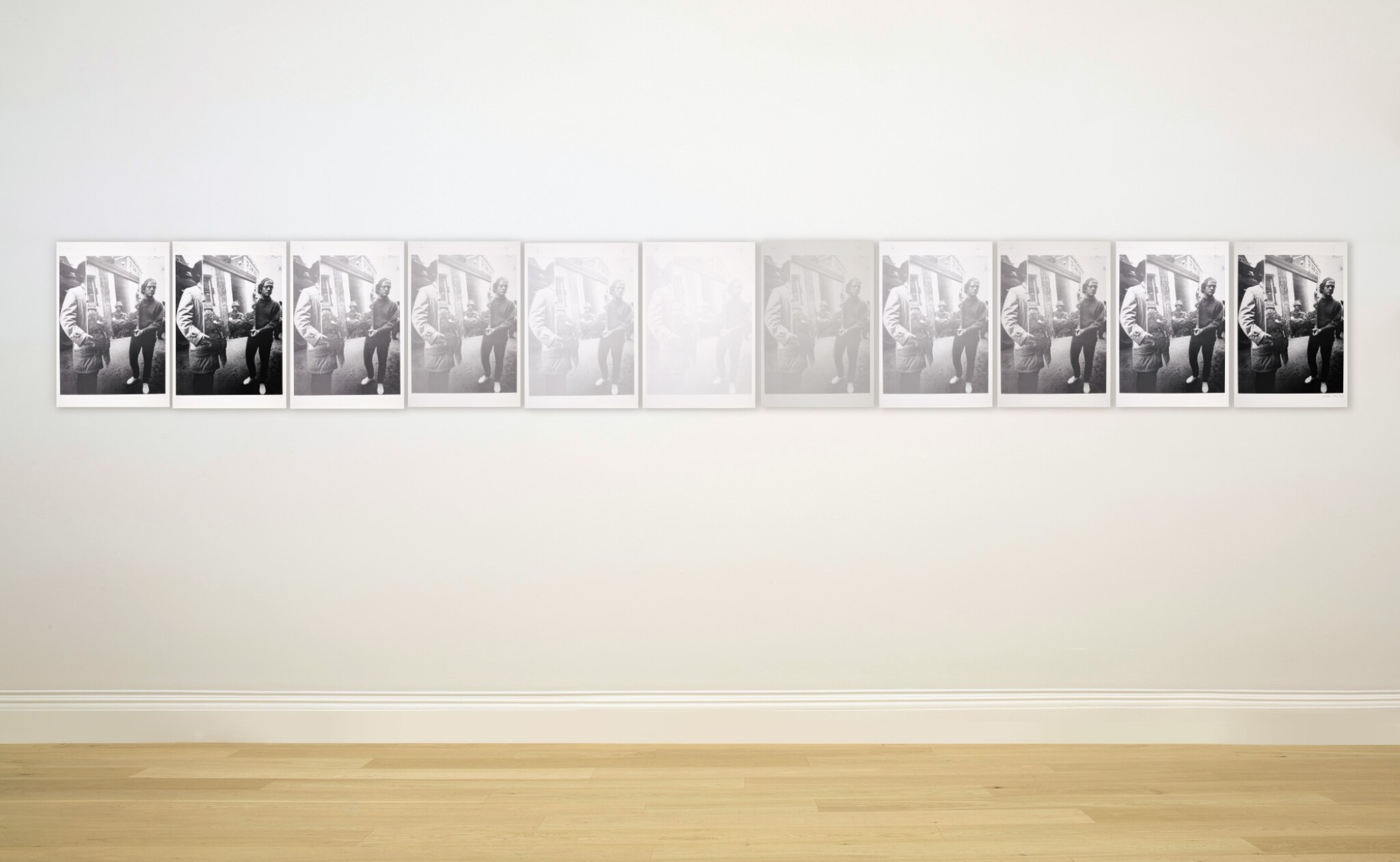 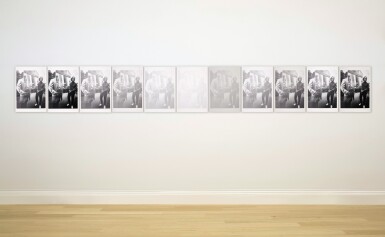 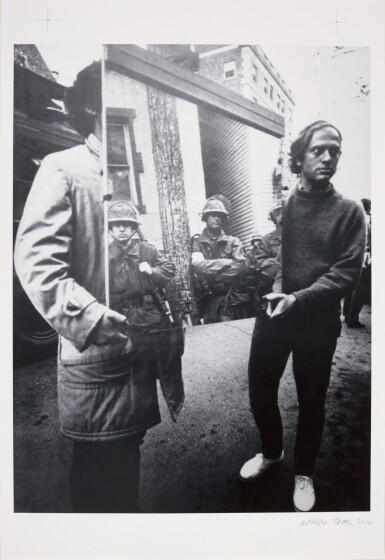 numbered 1/3 on the first sheet; signed and dated 2012 on the last sheet

Titled simply 1968, Alfredo Jaar’s multi-part photographic work presents the same black and white image 11 times in varying exposures ranging from high contrast to ghostly trace. The image depicts two young men holding a mirror up to a line of soldiers opposite, just beyond the frame of the camera. The 1960s was one of the most tumultuous and divisive decades in world history, characterised by social unrest and protest which led to lasting socio-political changes. The student protests in France beginning 3 May 1968, the subject of the present work, were some of countless similar youth-led movements sweeping the globe at the time. Instigated by dissatisfaction over the rigidity and hierarchy of the French university system among other things, the almost two-month long strike period came to be known as May 68 and ushered in more than five years of social upheaval in France.

Jaar’s works are usually politically motivated, often taking as their subject the power of the image to shape public perception and inviting the audience to think critically about photography as a highly subjective and curated media. “Images influence the way we think”, notes the Chilean artist, “they influence the way we imagine the world; they influence our knowledge of the world. These images come to us without mercy, without warning. We are bombarded by thousands of images at every moment of our lives. A lot of my work responds to that reality” (Alfredo Jaar in conversation, in: Smithsonian American Art Museum, Meet the Artist: Alfredo Jaar on “Life Magazine, April 19, 1968”, 22 July 2019, 01:30). The serial imagery that populates much of the artist’s work, including 1968, reflects the barrage of images that confront us in everyday life, inviting us to question the biases they conceal, and that we unwittingly consume.

The present work, which holds the soldiers as its subject though only their reflections are depicted in the mirror, forces the viewer to acknowledge the viewpoint of both the photographer and question their motivations and sympathies. The angle of the mirror and the soldiers’ physical absence seem to place the viewer among their number and at the receiving end of the student’s formidable gaze, challenging them to consider their own position in upholding oppressive systems of today.

Born to a Socialist Chilean family in 1956, Jaar was exposed to a hot political climate from birth. In the early 1970s, when Jaar was still in his teens, the artist was plunged into a deeply divided political climate following the election, and later the assassination, of Socialist President Salvador Allende and his subsequent replacement by the gruesome dictator, Augusto Pinochet. Jaar escaped Chile in 1982 following the completion of his degree in architecture. The events of his adolescence have continued to inform his work ever since. “I’m an idealist and a utopian”, he says, “I want to change the world” (Dominic Rushe, ‘Art provocateur Alfredo Jaar: “I want to change the world. I fail all the time”’, The Guardian, 1 August 2019, online). 1968 is typical of Jaar’s oeuvre where commonly held preconceptions of the relationship between art and politics are challenged and the aesthetic and the ethical are fused in order to focus on the world’s injustices.