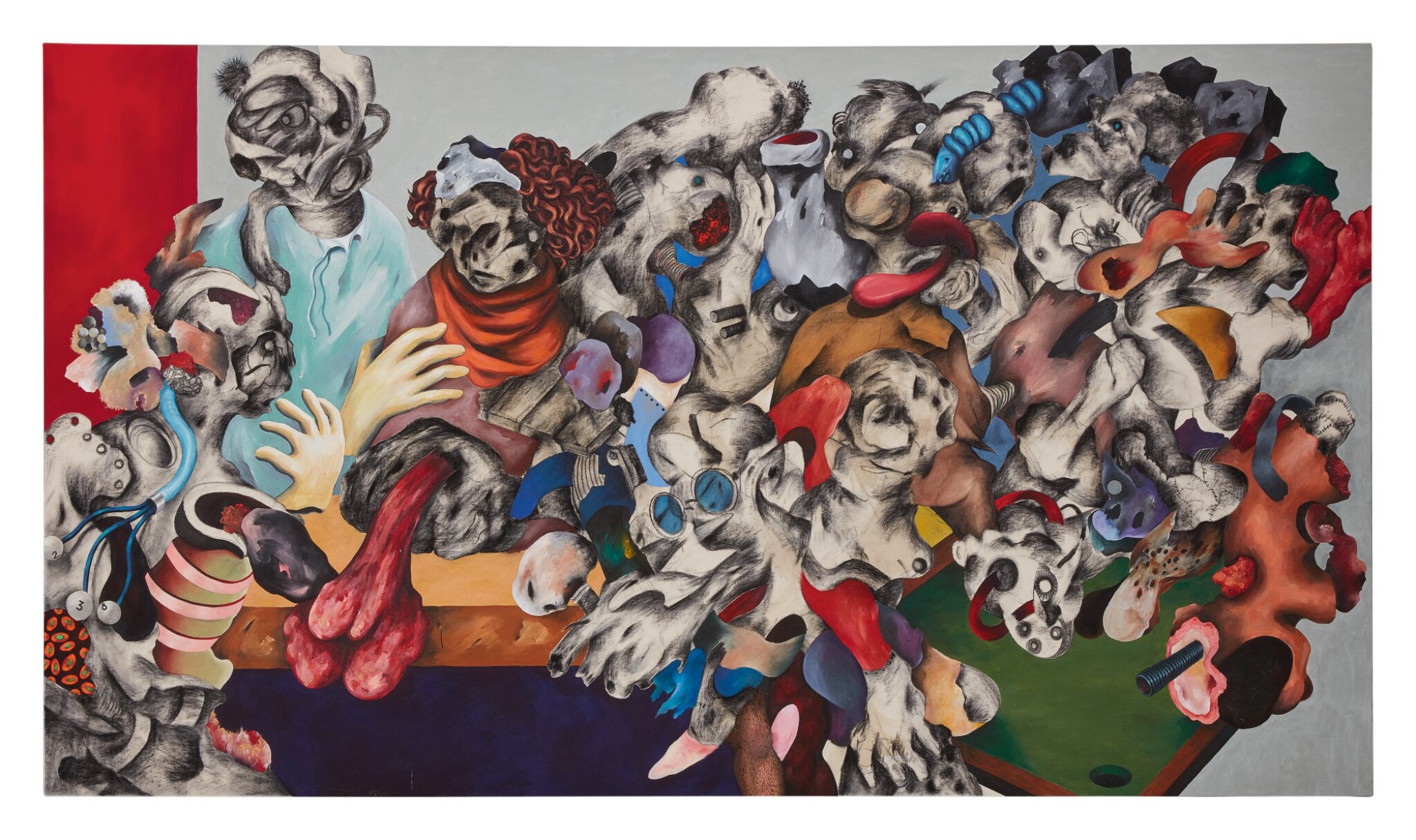 signed and dated 2010 on the reverse

charcoal and acrylic on canvas

This work is in very good condition overall. There are tonal and textural variations to the surface, inherent to the artist's working method. There are scattered minor handling marks along the edges, visible upon close inspection. There are scattered faint accretions throughout, most notably in the area of purple pigment in the lower left quadrant, visible upon close inspection. Under ultraviolet light, there is no evidence of restoration. Unframed.

Robert Goff Gallery, New York
Acquired from the above by the present owner

Ahmed Alsoudani’s Untitled from 2010 is of one of the artist's most brilliantly executed works to date: a remarkably visceral image of the horrors of war and violence. Writhing, contorted human and animal forms are caught in a ferocious struggle, literally tearing themselves apart in their fear and panic. This devastating destruction can be imbued with an intensely personal dimension when Alsoudani’s own complex background is taken into account: born in Baghdad in 1975, he fled to Syria at the age of twenty after committing a youthful act of anti-government graffiti, harshly punishable by Saddam Hussein's repressive establishment. Although the artist has made his life in the West, his family remain in Iraq, ensuring that Alsoudani still feels a conflicted sense of personal ownership and belonging to the country of his birth.

Influenced by master German Expressionists such as Georg Grosz, Otto Dix and Max Beckmann, Alsoudani's protest is articulated via abstracting and transmuting organic forms. In this respect, Alsoudani is equally the inheritor of Francis Bacon's bodily deformations: "The body is thrown into an abnormal athleticism of spasmodic screaming and writhing. Bacon's figures are often defined by the hysterical, temporary and provisional presence of determinate organs: ones that are polyvalent, aberrant and monstrous" (Darren Ambrose, “Bacon's Spiritual Realism - The Spirit in the Body” in: Martin Harrison Ed., Francis Bacon: New Studies, Göttingen 2009, p. 40). Flawlessly executed, the present work's coloring suggests combinations witnessed throughout Bacon's oeuvre: a base of dark indigo and charcoal grey is punctured by pinkish flesh tones and compellingly saturated reds and greens, underscoring the bodily focus of the composition. In this manner, Alsoudani and Bacon both address flesh without the sensationalism of blood, calling attention to the materiality of the organic and the energy it encapsulates.

The compelling applications of charcoal, acrylic paint and pastel evinced by the present work attest to Alsoudani's rejection of strict boundaries between media. "One of my biggest aims is to bridge the gap between the process of drawing and the final product of painting" (the artist in: Sarah Schmerler and Ahmed Alsoudani, “In the Studio,” Art in America, June/July 2011, p. 114). His works on canvas are stretched tight "like a drum" specifically to enable meticulously wrought charcoal drawings, which serve as skeletal forms onto which color may be applied (the artist in: “Ahmed Alsoudani in Conversation with Robert Goff,” in: Robert Goff and Cassie Rosenthal, Eds., Ahmed Alsoudani, Ostfildern 2009, p. 61). The achievement of depth without recourse to strict spatial perspective lends the work a surrealistic quality, recalling the watercolor and line drawing constructions of Wassily Kandinsky, Arshile Gorky or Graham Sutherland.

Whereas Graham Sutherland was employed by the British government as a "war artist" charged with documenting industries and landscapes affected by the war effort, Alsoudani insists: "I'm not trying to make 'war paintings,' but paintings about war. I'm interested in depicting the effects of war on people who live under those circumstances" (Goff, Ibid., p. 61). The refusal to be co-opted by any national power and choice to focus on the subjective experience of besieged communities perhaps allies the present work most closely with Picasso's immortal Guernica. A paradigmatic lament for the terror experienced by civilians subjected to aerial bombings during the Spanish Civil War, Guernica also incorporates man and beast in a massive and highly moving tableau. Yet while Guernica monochromatically employs a flat, collage-like composition, Alsoudani explodes the scene into a three-dimensional melée. Formal play, immediacy, and a gorgeousness of handling distinguish the present work, which epitomizes the height of Alsoudani's astonishing production.