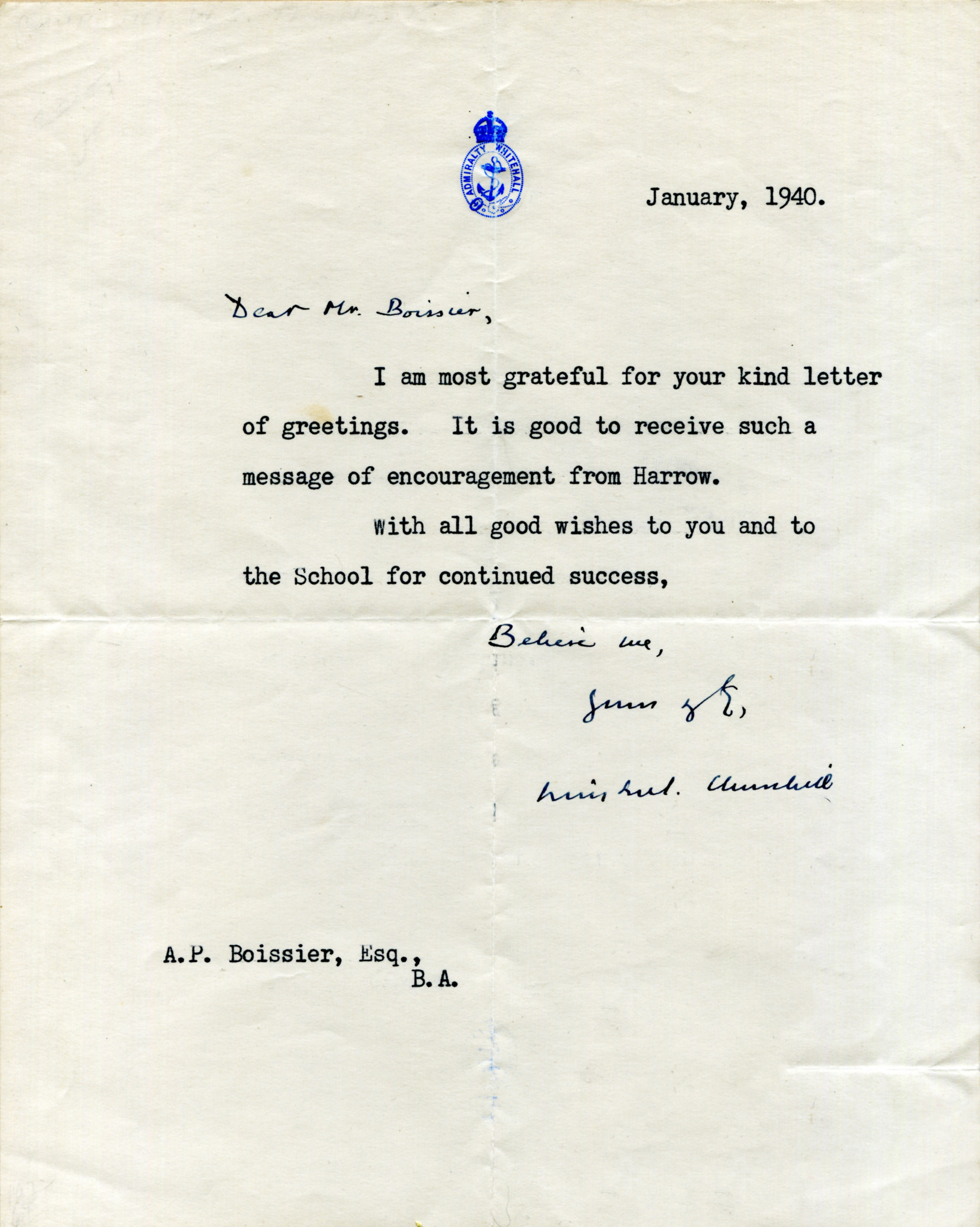 WRITTEN JUST FOUR MONTHS AFTER CHURCHILL’S RETURN TO GOVERNMENT AS FIRST LORD OF THE ADMIRALTY, AND FOUR MONTHS BEFORE HE WOULD REPLACE CHAMBERLAIN AS PRIME MINISTER

"I am most grateful for your kind letter of greetings. It is good to receive such a message of encouragement from Harrow,” Churchill wrote to Arthur Paul Boissier, the Headmaster of Harrow School, his alma mater.

Nine months after this letter was penned, during the Blitz of September 1940, Harrow School was hit by incendiary bombs. In a single night some three hundred bombs fell among the buildings or in the grounds, though this was apparently not by intent. German bombers involved in a raid over London had dumped the remainder of their bomb load to save fuel on their flight home, with the majority falling on Harrow. It was Churchill’s private secretary, John Colville (another alumnus), who told him of the tragedy. Until that moment Churchill had never mentioned Harrow to Colville, “except,” according to Colville, “with dislike.” Boissier had, in fact, written repeatedly inviting Churchill to visit Harrow, to no avail. Now, however, Churchill observed to Colville that Harrow was “courageous to remain on the Hill and not to emigrate to more peaceful pastures.” He went on to dictate a telegram to Head Master Boissier: “I am sorry to hear that Harrow has been bombed and hope that the damage is not serious. You have all my sympathy. Stick it. Winston S. Churchill.” On December 18, 1940 Churchill did visit Harrow and, as Colville later noted, “thoroughly enjoyed himself.” Old Harrow songs were sung and the Prime Minister quietly blinked back tears. Boissier wrote at the time of having been told that, "on occasions when affairs looked overblack, Mr. Churchill . . . would sing an appropriate verse or two from one of the [Harrow] songs and then get back to business."

The letter is in excellent condition, with the standard fold marks.