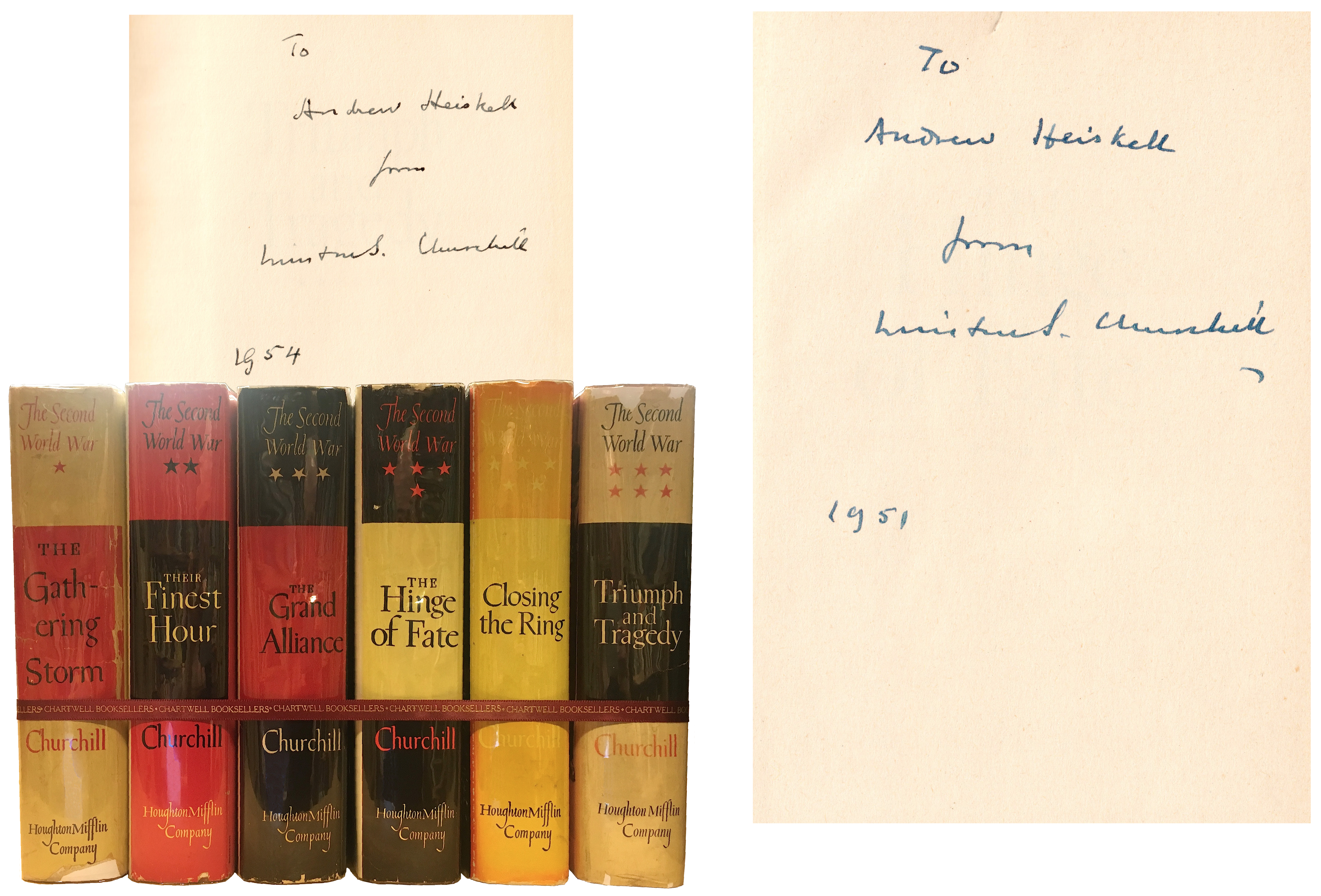 6 volumes, 8vo. Numerous maps, diagrams and tables. Original red cloth, original jackets; minor rubbing to lower jacket panels, spine panel of Volume I jacket worn with minor loss at tail, some fading to spine panel of Volume V jacket, Volume VI is a slightly later printing of the first edition, with a jacket priced at $6.50, some edgewear to Volume VI jacket with minor loss at head and tail of spine.

Laid-into Volume IV is a typed note on "Time and Life" notepaper from Walter Graebner, Time magazine’s first foreign correspondent and a go-between for the company with Churchill as he wrote his "War Memoirs": “Dear Bob, I am sending you a copy of the ‘Hinge of Fate’ inscribed to you by Mr. Churchill.” Laid-into Volume I is a pre-printed presentation slip: “With all good wishes from Winston S. Churchill.” Life magazine debuted Churchill’s "Second World War Memoirs" in serialization. The memoirs were then published in book form in the U.S. first, with the six volumes issued over a period of six years under the following titles: The Gathering Storm (Volume 1), Their Finest Hour (Volume 2), The Grand Alliance (Volume 3), The Hinge of Fate (Volume 4), Closing the Ring (Volume 5) and Triumph and Tragedy (Volume VI). Andrew Heiskell went to work at Life magazine in 1938 as a science editor at the age of 23. In 1946, aged 30 he was named the magazine’s publisher. Heiskell continued to rise rapidly through the ranks at Time, Inc., finally becoming Time’s chairman and CEO in 1960. He lived to oversee the closing down of Life in 1972 and, in 1974, the inauguration of People magazine, which was essentially his brainchild. Heiskell, as publisher, received these first edition volumes personalized for him by Winston Churchill as the books came out, following their serialization in Life. “Let’s always remember,” Heiskell would tell his staff, “that the Churchill Memoirs are the biggest literary and historical project that Life, or for that matter any other publication, has ever undertaken.”

From the family of Andrew Heiskell by direct descent