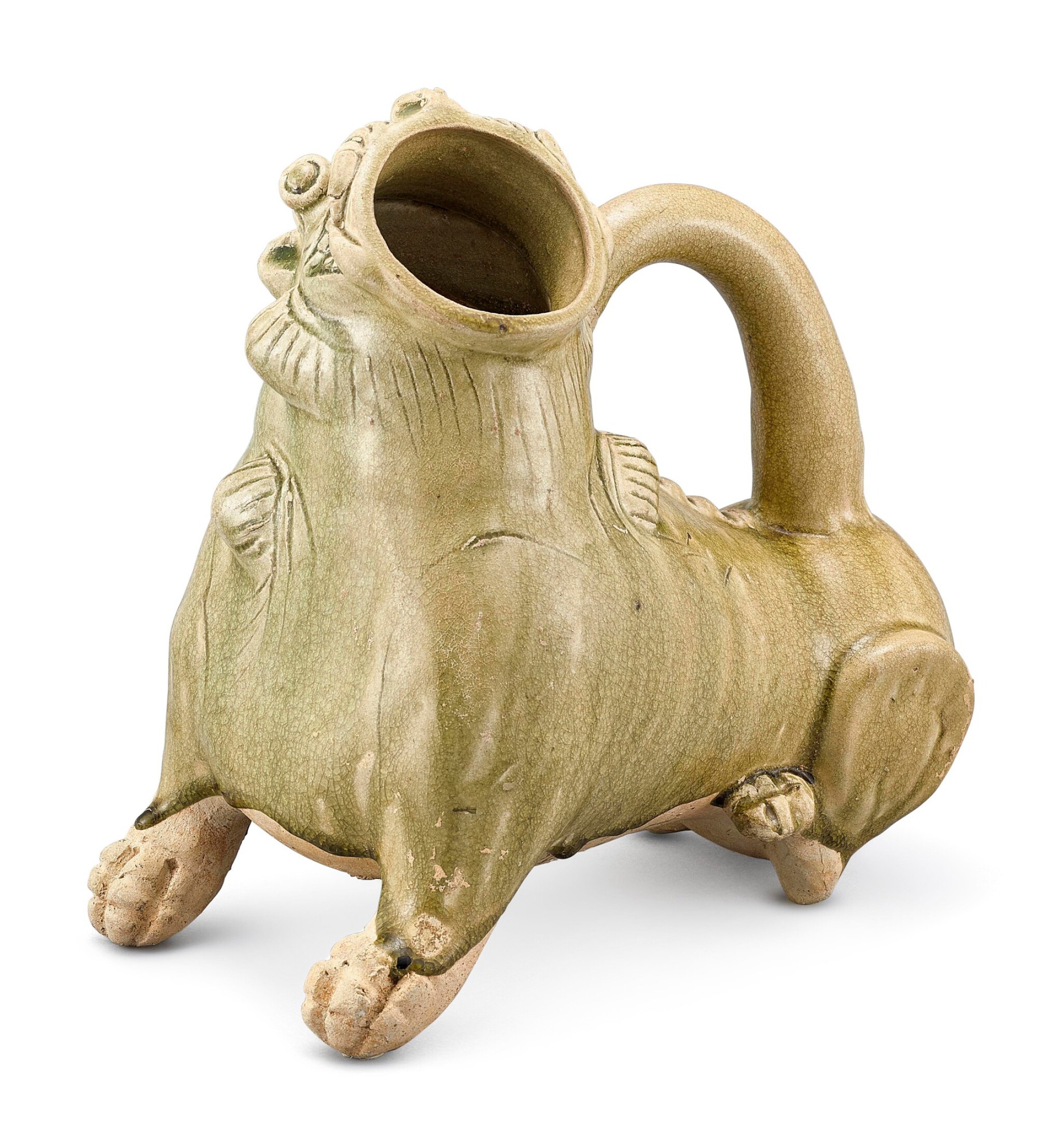 Splendor of the Past: The Spirit and Form of Ancient Chinese Ceramics, Hong Kong University of Science and Technology, Hong Kong, 2014.

Playfully modelled as a tiger seated on its haunches and with its head raised and turned gently sideways, this piece is special for the detailed modelling of the animal’s features, from its protruding eyes and bushy brows, to its notched spine and unusual pose. Such vessels in the form animals were made at the Yue manufactories in Zhejiang province, situated around Shaoxing, south of the Bay of Hangzhou. Active from the 3rd to the 6th century AD, these kilns were the leading manufacturers of green-glazed ceramics in the Six Dynasties period. The kilns produced both practical wares for daily use and funerary items, both characterised by their applied greyish-green and translucent glaze and their unconventional forms. Potters were often inspired by metal prototypes, as for this piece, whose form can be traced back to figural vessels made of bronze and lacquer from as early as the Western Han dynasty (206 BC-AD 9). While they are often described as urinal, their exact function is uncertain.

A vessel of this type, but modelled with its head straight, is illustrated in The Tsui Museum of Art. Chinese Ceramics I. Neolithic to Liao, Hong Kong, 1993, pl. 58 (right), together with an example from the Western Jin dynasty, pl. 59. Two further examples attributed to the Western Jin, in the Zhejiang Provincial Museum, Hangzhou, are illustrated in Zhongguo taoci quanji [The complete works of Chinese ceramics], vol. 4, pls 66 and 74, together with three further examples published on the museum’s website, the first measuring 26,5cm (https://www.zjmuex.com/Collection/Details/TSGC?nid=1347), the second 24cm (https://www.zjmuex.com/Collection/Details/TSGC?nid=1142), and the third 19.4cm (https://www.zjmuex.com/Collection/Details/TSGC?nid=5451); and another huzi in the Shanghai Museum, is published in Complete Series on Chinese Art: Arts and Crafts Section: 1. Ceramics, vol. 1, Shanghai, 1988, pl. 193.