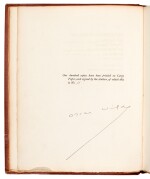 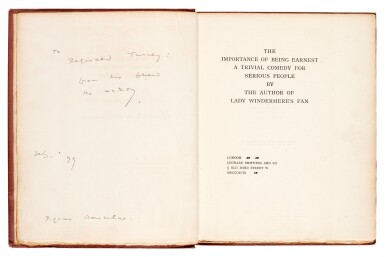 WILDE | The Importance of Being Earnest, 1898, one of 100 copies, presentation copy inscribed to Reginald Turner

WILDE | The Importance of Being Earnest, 1898, one of 100 copies, presentation copy inscribed to Reginald Turner

THE IMPORTANCE OF BEING EARNEST. A TRIVIAL COMEDY FOR SERIOUS PEOPLE BY THE AUTHOR OF LADY WINDERMERE'S FAN. LEONARD SMITHERS & CO., 1899

Mason does not provide a date for the publication of this, the limited signed edition of Wilde's masterpiece. Wilde appears to have inscribed a small number of copies during February 1899, as here.

Wilde mentioned this copy in a letter to Turner sent on 3 February 1899 (see Complete Letters, London, 2000, pp. 1121-1122). Wilde notes "I am sending you, of course, a copy of my book... I hope you will find a place for me amongst your nicest books, not near anything by Hichens or George Moore. I should like it to be within speaking distance of Dorian Gray...")

Reginald Turner, the journalist and wit, was the illegitimate son of Lionel Lawson (an uncle of Edward Lawson, the proprietor of the Daily Telegraph). Turner published a number of novels and was a lifelong friend of Max Beerbohm. He was described as 'a dear fellow' by Wilde in 1894 and as 'the Boy-Snatcher of Clements Inn' in 1897. Turner was one of the few who did not renounce his friendship with Wilde and would later nurse him during his final illness.

WILDE | The Importance of Being Earnest, 1898, one of 100 copies, presentation copy inscribed to Reginald Turner
Lot Closed
Lot 171