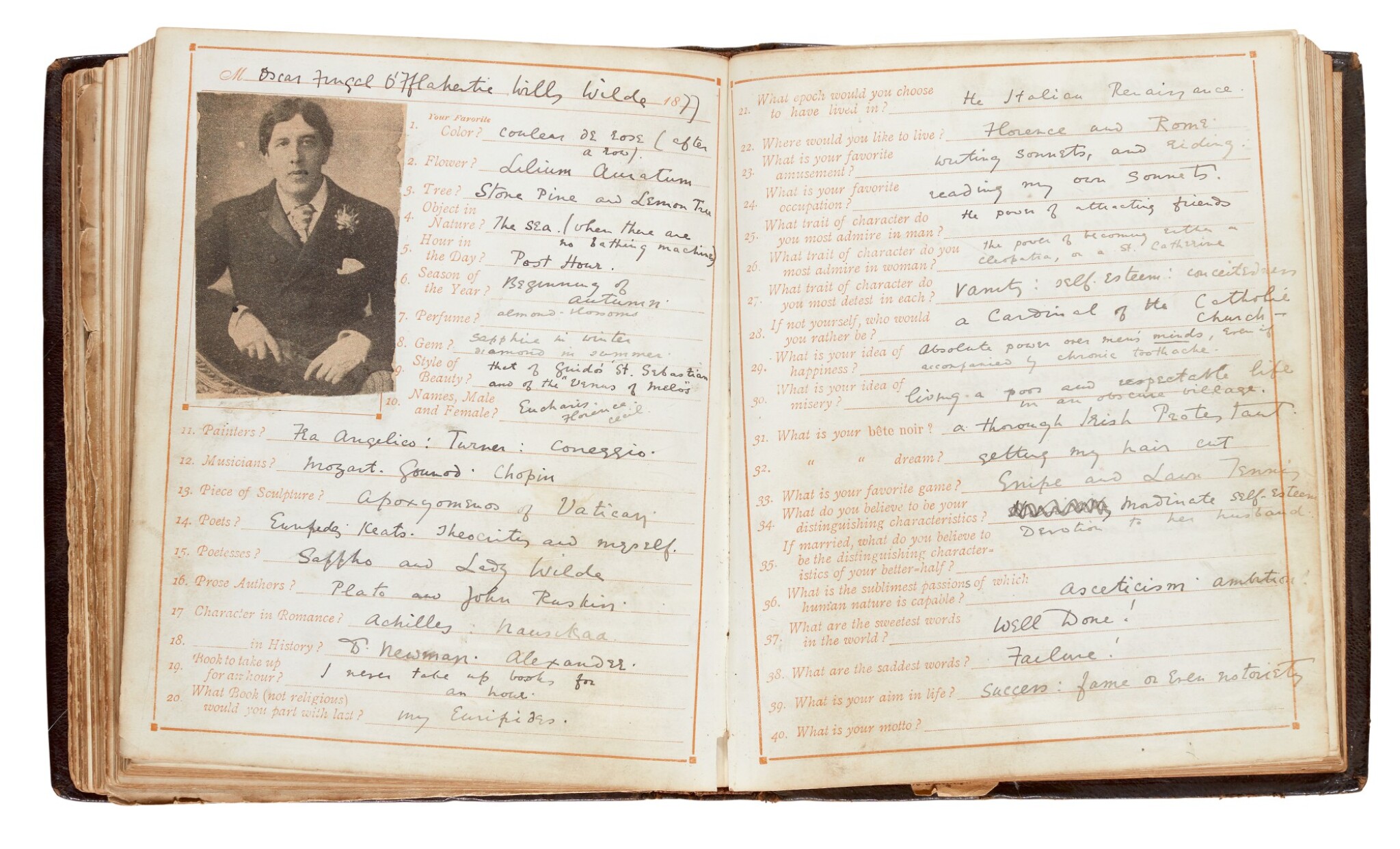 The idea behind Robert Saxton’s Mental Photographs was, as noted in the ‘Preface’, to provide ‘a record for the tastes and characteristics of friends; in short, for their mental photographs…’ Forty questions were asked and the album provides spaces for responses (together with space for ‘a carte de-visite’ photograph).

There were numerous versions of the album, ranging from 23 to 40 questions with different numbers of blank forms and different bindings. The cheapest edition appears to have sold for $1.50 and the most expensive (described as bound in 'Rich Levant morocco' and 'an elegant book for presentation') sold for $12. The present copy is an example of the most expensive and contains dated entries between 1872 and 1929 with a geographical range between Chicago and Brighton. There are around 100 forms of which slightly over half are left blank.

Wilde was in his early twenties when he contributed to the album in 1877. He was still at Oxford and yet to publish a book. His responses sparkle with the author’s characteristic ebullience and many are perfect Wildean epigrams. His idea of happiness, for example, is ‘Absolute power over men’s minds, even if accompanied by chronic toothache’ and his idea of misery is ‘Living a poor and respectable life in an obscure village’. Although at the time unmarried, Wilde chooses to respond to the question ‘If married, what do you believe to be the distinguishing characteristics of your better-half?’ with ‘Devotion to her husband’. Wilde’s final response has a chilling premonition of his own destiny. Asked ‘What is your aim in life?’ he responds ‘Success: fame or even notoriety’.

The original – or early – owner of the album was Adderley Millar Howard (c. 1863 - 1827), an actor, a touring theatrical impresario and, later, a theatrical manager. His obituary in The Stage on 13 October 1927 notes that that he ‘had a long and varied career on the stage, extending over more than 40 years’. If Adderley Howard was the original owner of this album he would have been in his early to mid-teens when he collected Wilde’s entry. The Stage notes that ‘he left home while still in his teens to join a profession in which he had neither friends nor influence…’