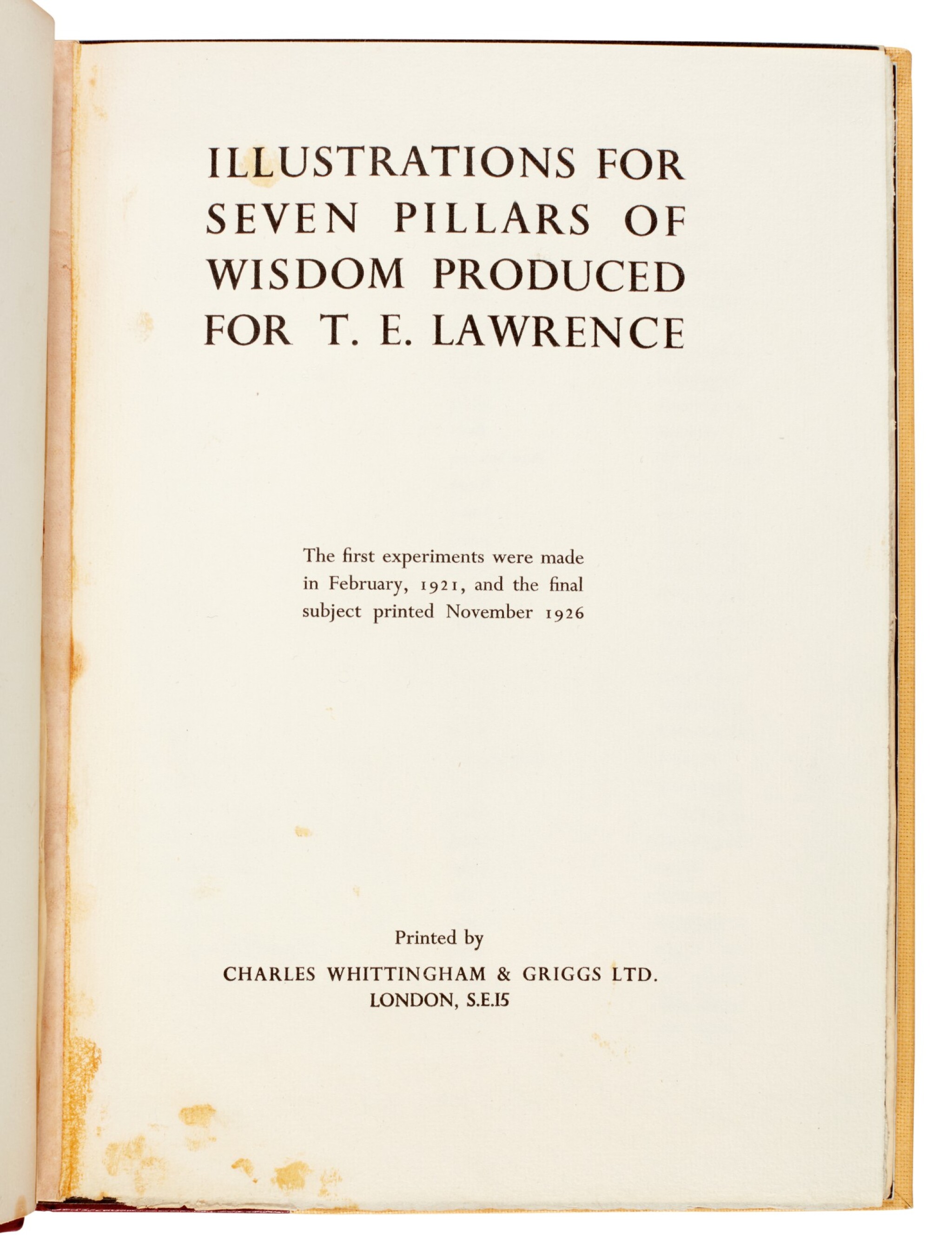 4to, PROOFS BEFORE LETTERS OF THE ILLUSTRATIONS FOR THE 1926 SUBSCRIBERS' EDITION, title and one leaf of illustrations in perpetua type, 66 colour and black-and-white proof plates (3 double-page, one folding double-page, one loosely inserted, all numbered neatly on the verso except for the loosely inserted plate), after Eric Kennington, Augustus John, William Robert, William Nicholson, Paul Nash, William Rothenstein and others, contemporary quarter crushed red morocco, linen boards, spine titled in gilt, slipcase, residue of adhesive on title page, minute traces of wear at head and base of spine

THE PRINTER'S SET. Whittingham and Griggs produced the illustrations, but the letterpress title and list of illustrations were probably printed at the Golden Cockerel Press.

AN EXCEPTIONAL RARITY: THE MOST COMPLETE SET OF PROOF PLATES FOR "SEVEN PILLARS OF WISDOM" RECORDED.The production of the plates for Lawrence's masterpiece were one of the greatest challenges for the celebrated Subscribers' edition issued in 1926. Lawrence had commissioned illustrations from some of the best-known artists of the period, but the technical problems of reproducing their images accurately and to the author's satisfaction were great, as the statement on the title-page suggests: 'The first experiments were made in February, 1921, and the final subject printed November 1926'. Lawrence neatly demonstrated the disparity between the production values of Seven Pillars of Wisdom and those current at the time in a letter to Charlotte Shaw of 26 August 1926: 'The colour printers are proving [sic] their last three prints. One has twenty-three colours upon it. Lord save us! Kyllmann, a Constable partner, was admiring some of the prints at Chiswick, and said to the printer ... "Now why shouldn't you give us some work of that quality?" "We will", said [Francis] Newbery, "if you'll pay 10/- a print" Exit K' (T.E. Lawrence Correspondence with Bernard and Charlotte Shaw 1922-1926, 2000, p.194). Indeed, these technical problems were in large part responsible for the delays in the book's publication and the ever-increasing cost of the work, as Lawrence explained in a letter to Whitney H. Shepardson of 15 October 1924: "The prime cost lies in the pictures (about 60, many in colour, at 10/- a print!) and the pictures are only an unjustifiable whim of mine. They have been done by British artists whom I liked, & who would work for me"(cf. The Spiro Family collection, Christie's New York, 26 February 2004, lot 96).

The plates frequently went through a number of proofs before they met with Lawrence's approbation, and were printed by Charles Whittingham and Griggs Ltd, whose manager was Francis Newbery. Some of the proof plates appear to have been retained by the printers and Newbery, as O'Brien records: "a few sets of the plates [were] gathered up and bound. These lack a printed title page and are approximately 5mm larger in size [than those of the Leicester Gallery Album, i.e. c.260mm high]" (O'Brien p.76). Although the letterpress index calls for 65 plates, this volume contains 65 bound proof plates and an additional, loosely-inserted proof plate. Other sets of proof plates are known, but typically lack up to 33 plates; after this set, the most complete set that we can trace is a second, unbound set from Newbery's library which contained 62 plates (see sale at Sotheby's, 17 July 1997, lot 295, with a letterpress title and list of contents). In 1933 Newbery, with Christopher Sandford and Owen Rutter, took over the Golden Cockerel Press, and it seems likely that the title and list of illustrations for this volume were printed by the press (where Newbery had published Lawrence's Crusader Castles in 1936), in the perpetua type which they employed for Lawrence's books. If this is the case, it seems probable that the binding was executed by Sangorski and Sutcliffe, who were commissioned to provide similar bindings for the Golden Cockerel Press's editions of Lawrence (and, indeed, bound some copies of the subscribers' edition of Seven Pillars of Wisdom).