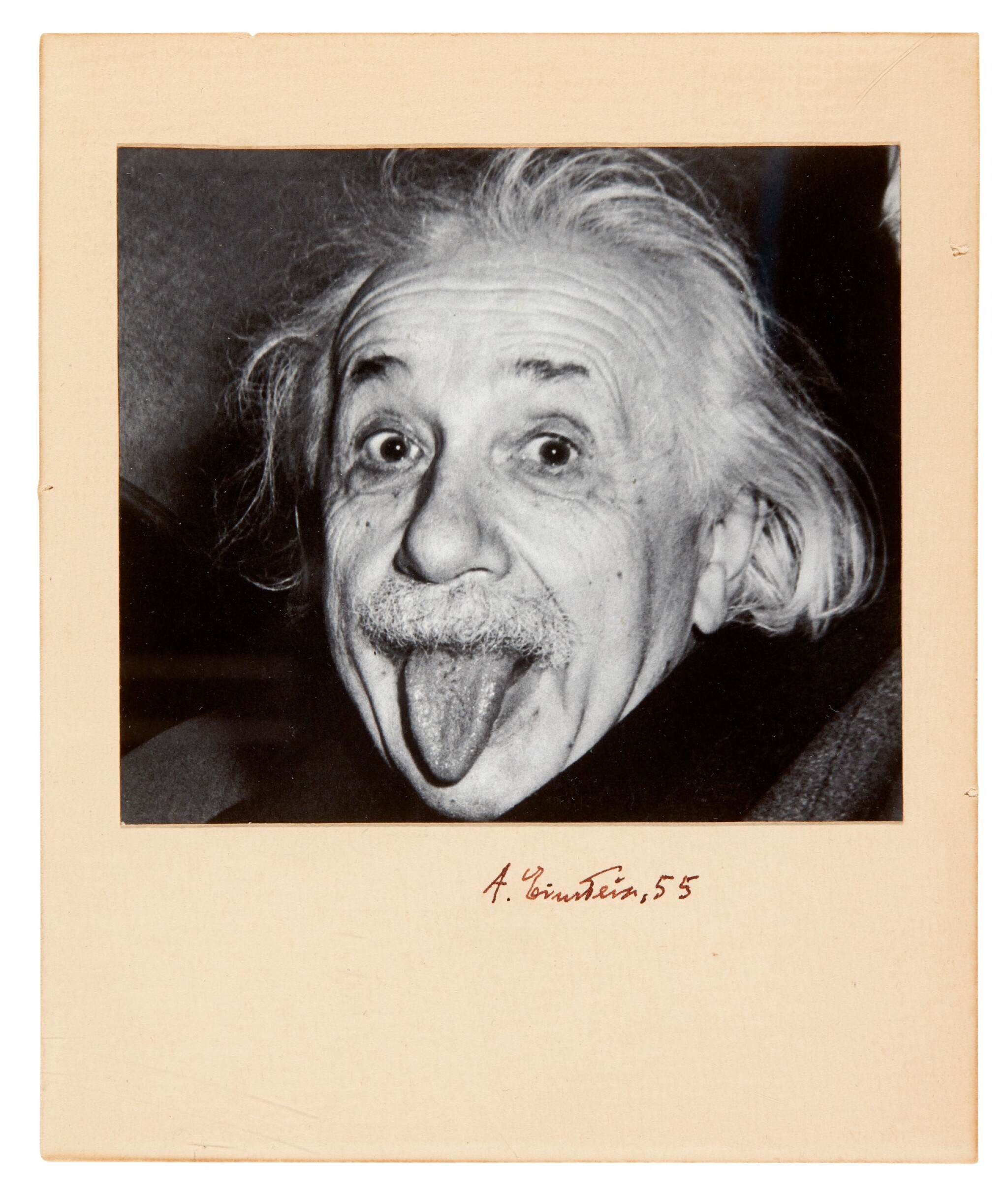 PHOTOGRAPHIC PORTRAIT, SIGNED ON THE MOUNT

100 x 115mm, head and shoulders portrait of the scientist depicting him sticking his tongue out at the camera, by Arthur Sasse, taken whilst he was seated in a car returning from his 72nd birthday celebrations at the Princeton Club (14 March 1951), cropped to Einstein's head, mounted on card, signed and dated on the mount "A. Einstein, 55", with a pencil note on the reverse of the mount ("April 16 1955 Princeton"), framed and glazed (250 x 250mm)

[with:] letter of provenance signed by Elizabeth S. McKinney, confirming that Einstein signed the autograph for her father, Benjamin McKinney, at Princeton Hospital on 16 April 1955

Einstein had suffered from a ruptured abdominal aortic aneurysm on Thursday 14 April 1955, and was admitted to Princeton Hospital the following day. He took his unfinished draft of a speech into hospital, but refused further surgery: "I want to go when I want. It is tasteless to prolong life artificially; I have done my share, it is time to go. I will do it elegantly." His family gathered in the hospital over the weekend, during which time Einstein remained lucid and able to discuss his final wishes as well as exchanging scientific ideas with his son Hans Albert. Einstein died early in the morning of Monday 18 April.

The signature is on the mount of a fine print of the life-affirming photograph of Einstein sticking out his tongue in response to calls from photographers to smile for the camera. Somewhat ironically, this cheeky, child-like gesture was itself captured perfectly by a UPI photographer and has become the most widely reproduced and familiar portraits of one of the towering figures of the twentieth century.

We have found no record of any Einstein autograph material of a later date having previously been sold at auction.

The proceeds of this lot will be donated to The GIVE PEACE A CHANCE foundation, a new foundation that will support projects around the world that encourage the peaceful development of humankind.