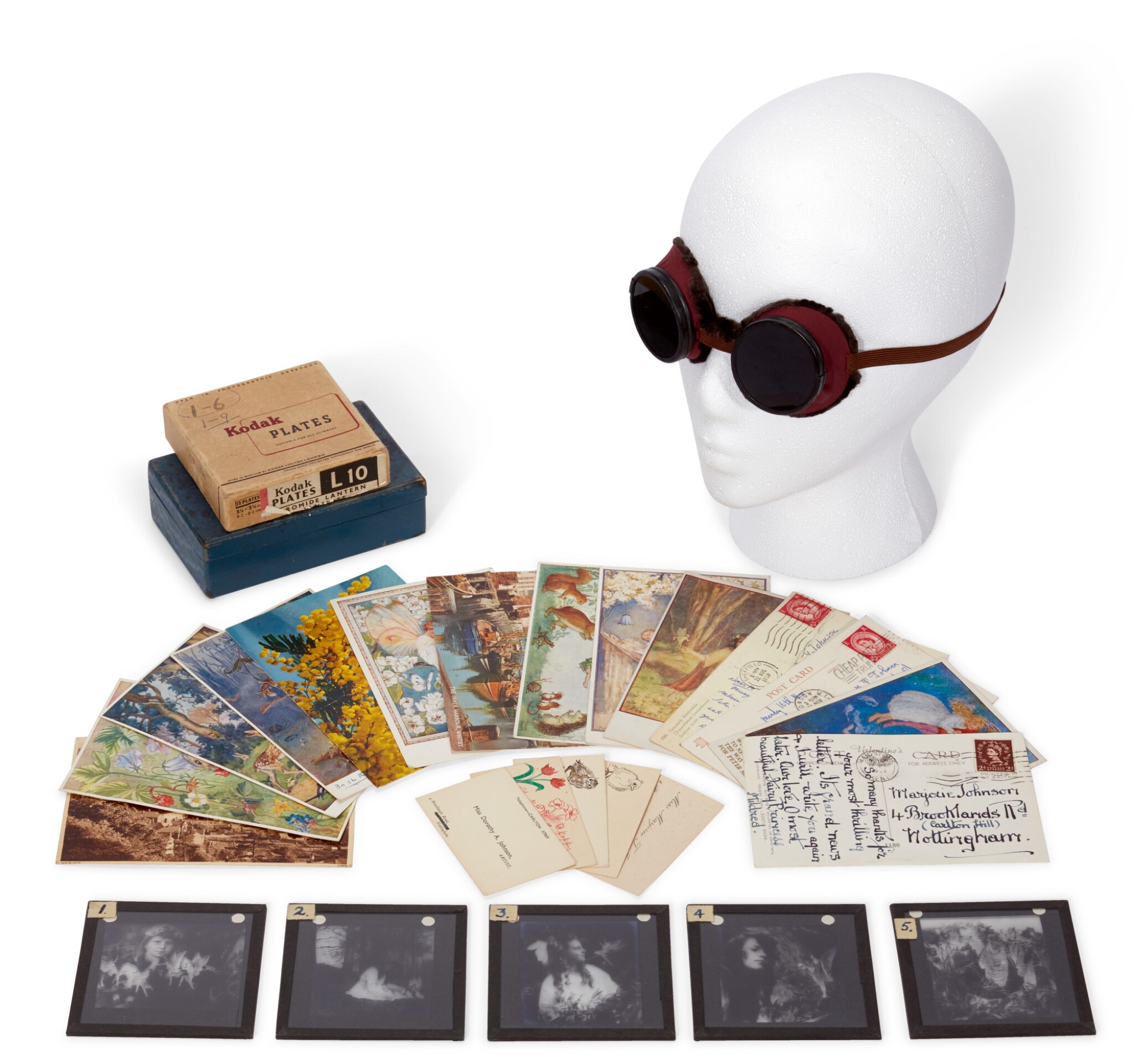 COLLECTION OF MATERIAL INCLUDING:

(ii) one pair of glass goggles in box;

(iii) a group of 24 postcards, the majority of which are addressed to Miss Marjorie T. Johnson, discussing her "Fairy Book", thanking her for her newsletters and sending birthday wishes

“I HAVE CONVINCED MYSELF THAT THERE IS OVERWHELMING EVIDENCE FOR THE FAIRIES” (Sir Arthur Conan Doyle, The Coming of the Fairies)

From July 1917 onwards, in the small village of Cottingley, near Bingley in Yorkshire, the fifteen-year old Elsie Wright and her ten-year-old cousin Frances Griffiths produced a series of photographs (some taken as late as August 1920) showing fairies and gnomes in rural settings, mostly in company with one or other of the girls themselves. The theosophist Edward L. Gardner, who was interested in the paranormal, came to hear of them, as did Sir Arthur Conan Doyle, who subsequently wrote extensively about them in Strand Magazine (December 1920 and March 1921) and in his full-length book The Coming of the Fairies.

Despite attracting ridicule from sceptics in the huge publicity which ensued, Doyle, Gardner and others involved believed implicitly in the genuineness of the photographs, which they believed bore witness to protoplasmic thought forms emanating from the girl’s psychic auras.

Conan Doyle states: “Maybe it is an indication that we are reaching the silver lining of the clouds when we find ourselves suddenly presented with actual photographs of these enchanting little creatures – relegated long since to the realm of the imaginary and the fanciful.”

Conan Doyle was so convinced that he argued “If the objects are indeed there, and if the inventive power of the human brain is turned upon the problem, it is likely that some sort of psychic spectacles, inconceivable to us at the moment, will be invented, and that we shall all be able to adapt ourselves to the new conditions.”

Interest in the occult and these realms continued to grow and The Fairy Investigation Society was founded in 1927, ten years after the Cottingley photographs by Capt. Sir Quentin C.A. Craufurd, MBE and the artist Bernard Sleigh. A semi-secret occult group, the society was dedicated to collecting information and evidence about the existence of fairies. Membership of the society was conditional on a genuine belief in fairies. After a brief hiatus and loss of records during the Second World War, Craufurd revived the Fairy Investigation Society with invaluable organisation and publication from Marjorie T. Johnson.

In her position as Secretary of the society, Johnson published numerous articles and was an organisational force of nature, connecting various members of the society. Her greatest contribution however was the creation of the “Fairy Census” a definitive collection of accounts of fairy sightings. Membership during this period flourished and included RAF commander Sir Hugh Dowding, Walter Starkie and even Walt Disney.

The mystery of the Cottingley photographs was not properly solved, nor the hoax fully explained from a technical point of view, until an extensive investigation by Geoffrey Crawley was published between December 1982 and April 1983 in The British Journal of Photography. This finally prompted public confessions from the unrepentant perpetrators themselves, who explained how they had produced coloured cut-out drawings which were mounted with the help of hatpins, and then used super-imposition techniques. However, Frances Griffiths maintained until the end of her life in 1986 that one of the photographs was not produced by trickery, but showed genuine fairies.