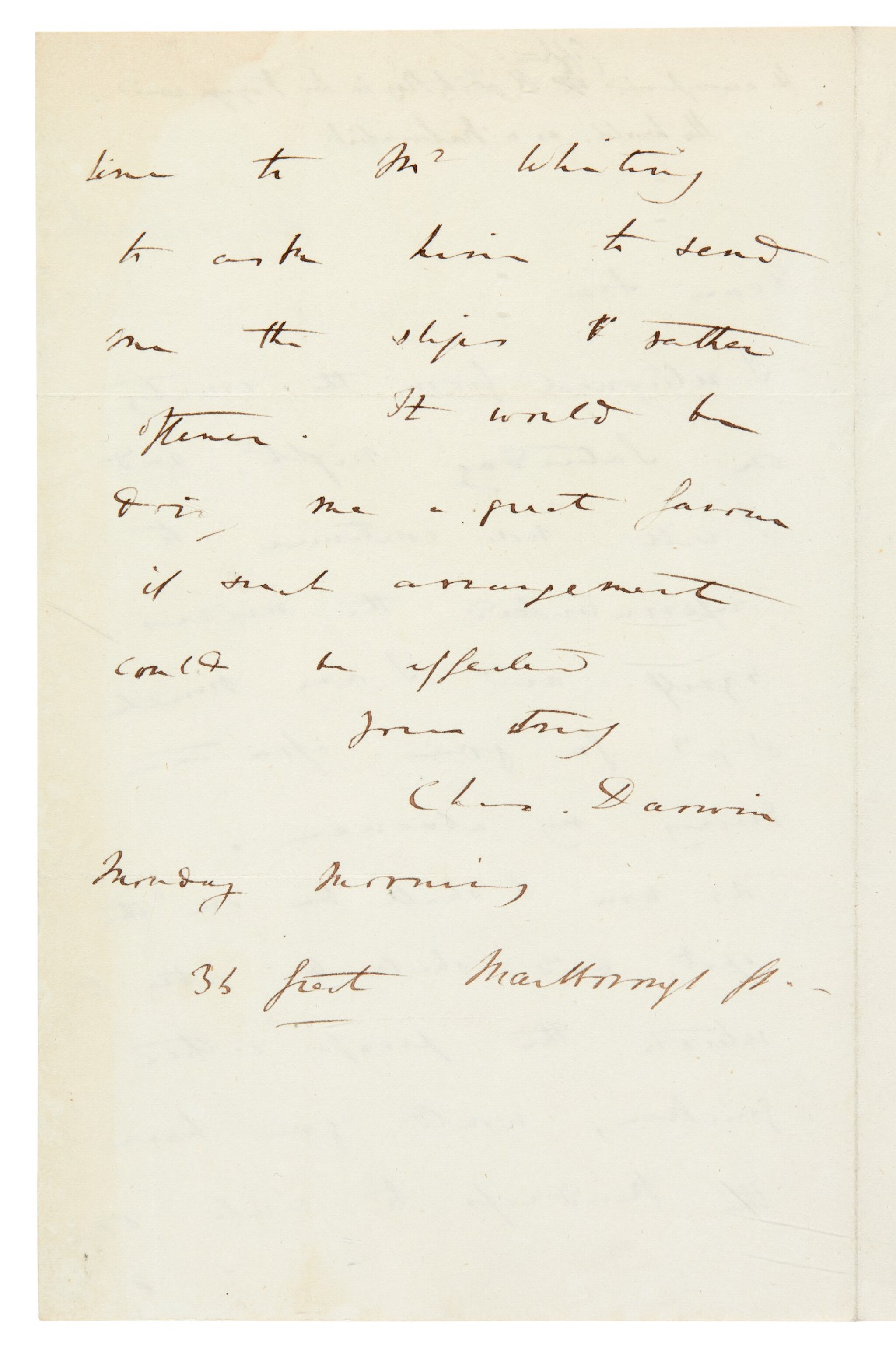 informing him that "having returned from the country on Saturday night [...] I will now continue to superintendend [sic] the revises myself - and I am much obliged for your assistance during my absence", and requesting that Mr Whiting send him proof slips more frequently, 2 pages, 8vo, annotated in ink by the collector Mary Hutton ("He accompanied Captain R. FitzRoy in his Voyage round the World, as a Naturalist"), integral autograph address leaf, 36 Great Marlborough Street, London, [late October 1837]; two seal tears on address leaf, remains of adhesive tape where previously mounted

AN UNKNOWN EARLY LETTER BY DARWIN TO HIS PUBLISHER ON PREPARING THE VOYAGE OF THE BEAGLE FOR PUBLICATION. Darwin began his first book - the seminal account of probably the most important voyage in the history of science, also known as The Journal of Researches - soon after his return to England in October 1836. He had completed the first draft in June 1837, and on 22 or 23 September sent the final completed manuscript and accompanying woodcuts to his publisher before leaving for the family home in Shrewsbury. His publisher, Henry Colburn, agreed to supervise the final proof corrections whilst Darwin was in the country, an arrangement cancelled by this letter which was written shortly after Darwin's return to Great Marlborough Street - the Soho thoroughfare on which were found both Darwin's lodgings and Colburn's offices. Darwin's book was printed by early November, at which time the neophyte author discovered his error in leaving the supervision of proofs to others: "During my absence Mr Colburn employed some goose to revise, & he has multiplied, instead of diminishing my oversights" (Darwin to Henslow, 4 November 1837). Publication was delayed for eighteen months, however, because the book was intended as the third and final volume of the Narrative of the ... Beagle so Darwin had to wait until his slower fellow authors had finished their work.

NOT RECORDED IN THE DARWIN CORRESPONDENCE PROJECT.