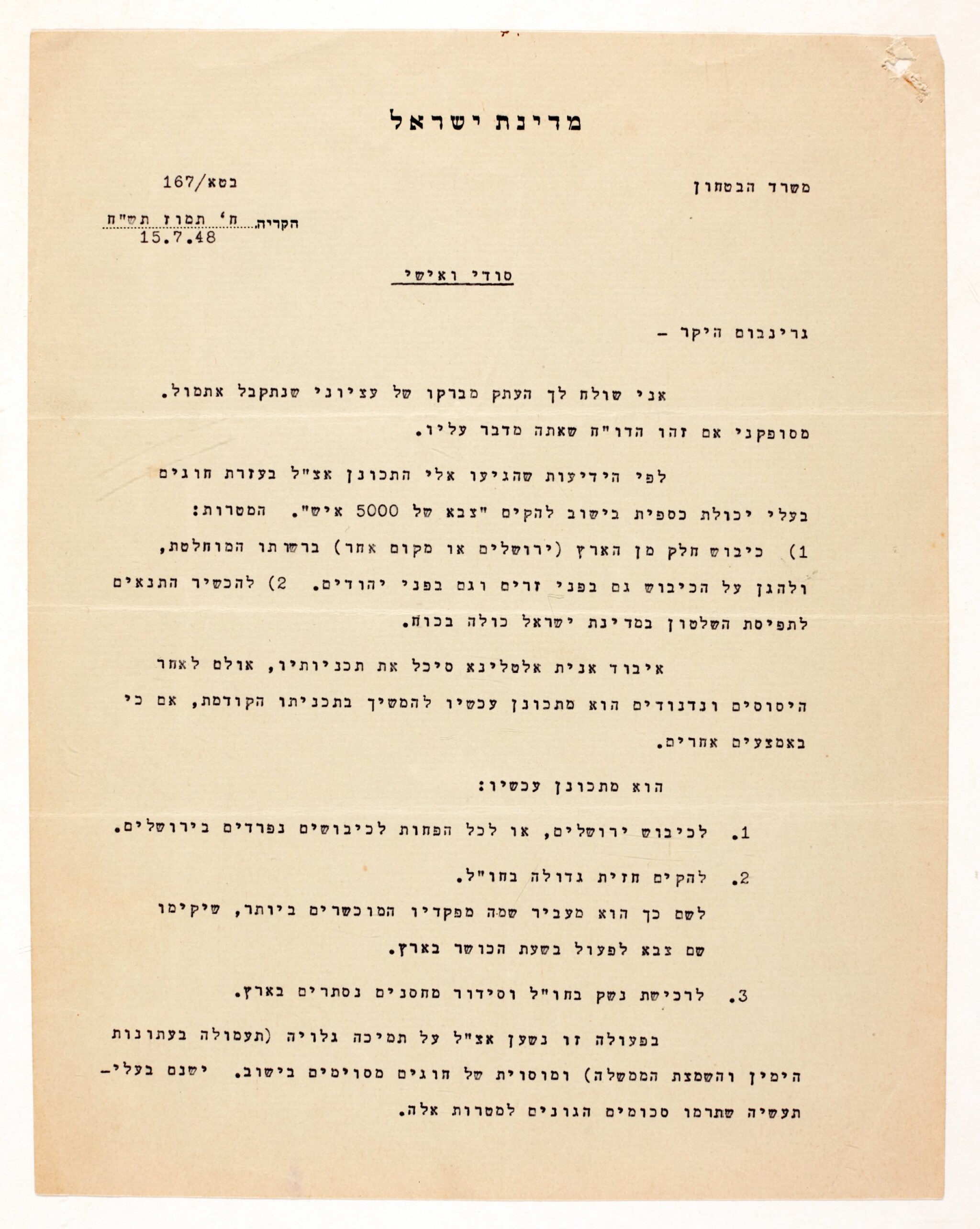 TYPED LETTER SIGNED, TO ITZHAK GRUENBAUM, MINISTER OF THE INTERIOR

discussing his profound concerns about the activities of the Irgun, explaining that the sinking of the Altalena has prevented their immediate plans for a coup, but warning that they are now planning to conquer Jerusalem and build up forces abroad, explaining that he is therefore deeply concerned about the ongoing battle for Jerusalem and the malign interference of Britain and France, in Hebrew, 2 pages, 4to, headed stationery of the State of Israel Ministry of Defence, 15 July 1948

AN IMPORTANT LETTER WRITTEN DURING THE ISRAELI WAR OF INDEPENDENCE. This letter is a powerful reminder of the deep splits within the Zionist movement, even as the nascent IDF fought the Arab armies who were trying to prevent the establishment of Israel. Fighting had resumed on 8 July, and Ben-Gurion's prime military concern when he wrote this letter was Operation Dani, the ongoing advance on Jerusalem. This was soon followed by an unsuccessful assault on the Old City, which was launched the night after this letter was written. Yet Ben-Gurion was nevertheless still deeply concerned about the threat to his vision of Israel posed by the armed proponents of Revisionist Zionism. His confrontation with Menachem Begin's paramilitary Irgun had reached its climax the previous month when a shipment of weapons destined for Irgun reached the Israeli coast in the Altalena: Ben-Gurion insisted that Irgun surrender their weapons and incorporate themselves in the IDF, and when they refused he had ordered the shelling of the ship. In this letter to Gruenbaum, Israel's first interior minister, he warns that their mutual enemies within the Zionist movement are still planning an armed insurrection with their shadowy foreign allies. In fact, the Irgun remnants in Jerusalem, the Jerusalem Battalion, were to surrender to the IDF on 22 September and the diaspora organisation was disbanded early in 1949.