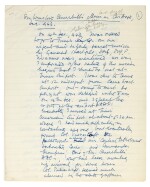 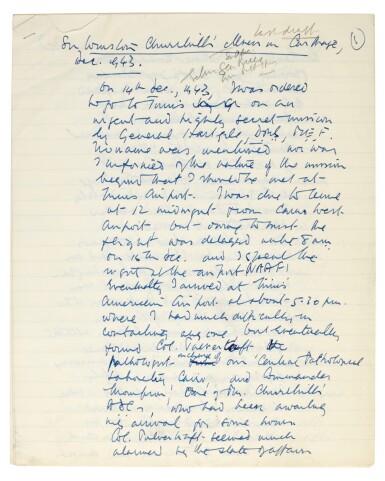 i) War Diaries, as Consulting Physician to Middle East Forces, in two volumes, detailing tours to military hospitals throughout the Middle East (Palestine, Syria), Egypt, and the Eastern Mediterranean, as well as other locations such as refugee camps ("...El Shatt...17000 [Yugoslav] refugees in three camps ... 20 to a tent. Very dusty and hot...", 29 April 1944), with notes on administration and medical matters such as infectious diseases, TB, malaria, dysentery, vaccination programmes, an outbreak of plague, malnutrition amongst Indian troops in Italy ("...Hindus just wont eat - have to be forcibly fed - don't like the food there - then anorexia nervosa...", 26 October 1944), individual cases of heart disease (often with diagrams), and the treatment of VIP patients including Winston Churchill (15-28 December 1943) and King Ibn Said in Jeddah (6-7 February 1945), 359 pages plus blanks, 4to, 1 February 1943 to 18 September 1945, black roan, with typescript transcriptions

iv) album of press clippings, photographs, letters, and ephemera, including further correspondence relating to his treatment of Churchill and a Christmas card signed by the Duke of Windsor

D. Evan Bedford (1898-1978), CBE, was an eminent cardiologist who served as a Brigadier in the Royal Army Medical Corps during World War II and as consulting physician to the Middle East Forces. He treated Churchill when he suffered atrial fibrillations during a bout of pneumonia in Tunis in 1943, and treated him again in his final years.