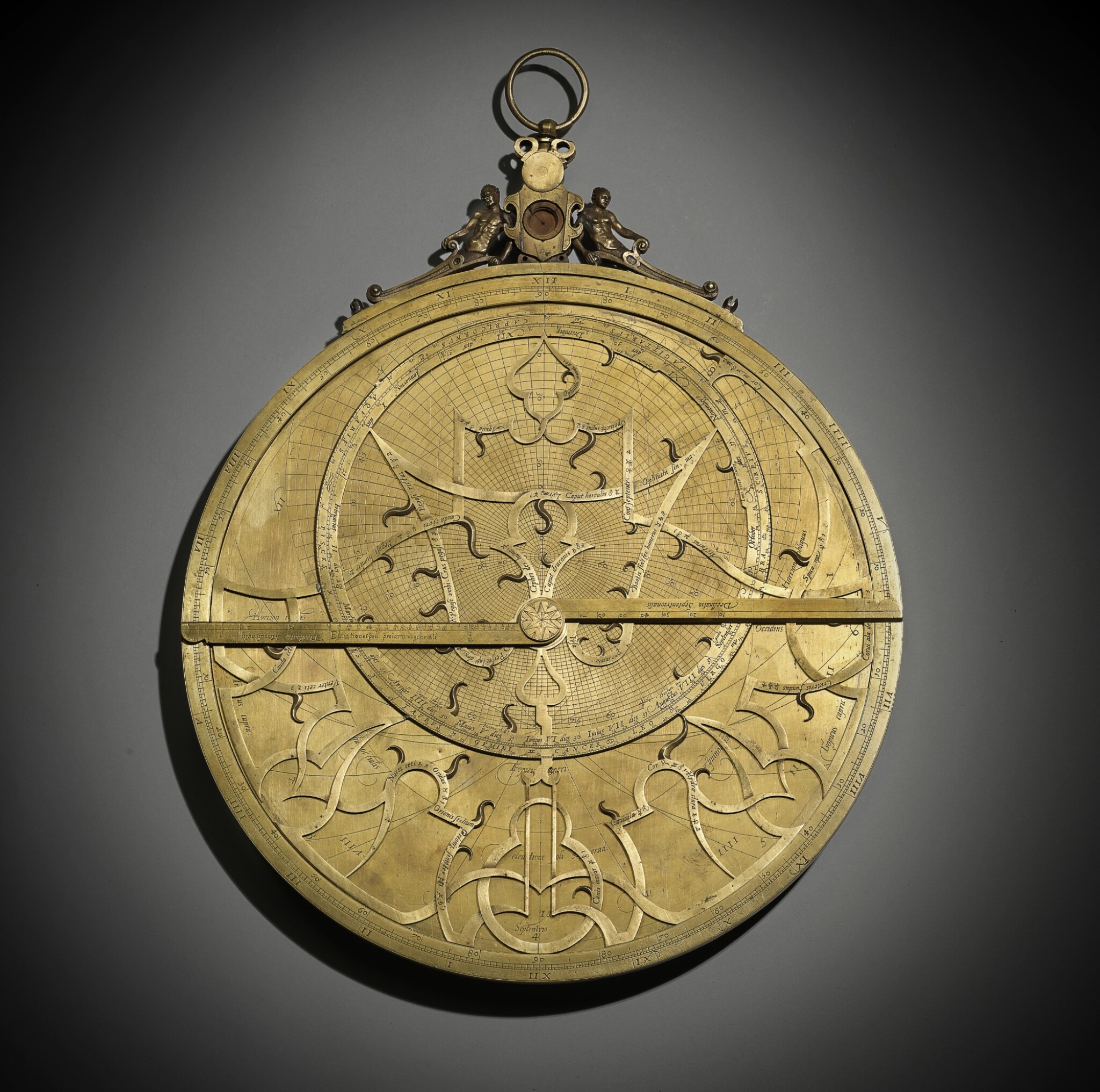 The Astrolabe has recently been lightly, professionally cleaned, but some slight traces of oxidation remain. One of the original four plates is missing for latitudes 45/48°. A section of strap-work that should run along the left edge of the limb from 10-55° to reconnect with the ecliptic scale in Aquarius is lacking. Two blobs of old solder show where it had once already been reattached before finally being lost. The strap-work arm attachment to the ecliptic at 20° Pisces has also been broken and repaired with silver-solder, which has also broken again, although the strap itself is present. There is minor damage, or metal flaws around the signature beneath the 'v' of 'Lovanij' and beneath the last two numbers of the date, probably a result either of difficulty of engraving them over a flaw, or as a result of later damage necessitating it being re-engraved. The instrument also lacks the rose, needle and cover for the compass inset in the throne as is frequently the case with Arsenius' astrolabes. Otherwise the condition is very good.

and thence by descent

This magnificent newly discovered and unpublished astrolabe by Gualterus Arsenius is the first signed and dated work by one of the most famous scientific instrument makers in 16th-century Europe to come to auction in more than 20 years. On 2 December 1999 an Arsenius astrolable, signed and dated 1568, but which had a replacement rete, was sold for $225,500 as lot 2 in the Time Museum sale at Sotheby’s, New York. An unsigned astrolabe, attributed to Arsenius, from the collection of Barons Nathaniel and Albert von Rothschild sold for £265,5000 as lot 174 on 8 July 1999 at Christie’s in London. Therefore, the rediscovery of the present 1579 astrolabe, one of only four currently known in private hands, is an exciting event which adds one more masterpiece to the prized oeuvre of Gualterus Arsenius.

Gualterus Arsenius matriculated at Louvain University in June 1546, Gualterus de Arsen inhabitant of ‘Clevens’, although nothing of him is known there. He was the nephew of the well-known mathematician and instrument-designer Gemma Frisius, but it is likely, on stylistic and historical grounds, that he worked with, or was even an apprentice of, the great engraver, calligrapher, map- and instrument-maker Gerard Mercator. The earliest known work from Arsenius’s burin is dated 1554, quickly followed by several instruments that can be associated with the court of Spain. From 1560 onwards he produced at least three or four instruments per year. Among them astrolabes pre-dominated, but he also made various forms of sun-dials, armillary spheres and surveying instruments. Arias Montano described him in January 1570 as ‘the person who makes the best [instruments] in Europe’, and his work displays a consistently high quality until his death, probably from an outbreak of plague that attacked Louvain, in 1580. His exceptional work influenced all the leading Flemish, Dutch, English and Spanish makers of the following generation

Context for the 1579 Arsenius Astrolabe

Variety in detail within the matrix of a characteristic design is one of the hallmarks of the work of Arsenius, who was singled out for special mention by Guicciardini in his Descrittioni di tutti i Paesi Basso (1567, but written in 1560) as an ‘excellent master of mathematical instruments of all kinds’. Of the approximately forty-five instruments ‘of all kinds’ known by Arsenius, some two thirds are astrolabes. To this corpus the instrument presented here is a new addition. In being an instrument of conventional form, i.e. without a universal projection drawn on the back. It is similar to only four other astrolabes, two preserved in Florence (Museo Galileo), one in Nuremberg, and one in a private collection. In style it clearly belongs to Arsenius’ later period; the rete is almost identical with that of the astrolabe dated 1571 preserved in Merton College, Oxford (Van Cleempoel, no. 34, figs. 1 & 2), and closely similar to that dated 1573 preserved in the Museo Galileo, Florence (Van Cleempoel, no. 35, fig. 3). Thus, there is consonance with the date of 1579 although no two of Arsenius’s instruments are exactly alike. An exceptional astrolabe by Arsenius, forming the cover of a scaphe dial to produce a composite instrument, was sold at Sotheby’s London, Masterpieces of Science and Technology from the 16th to the 20th Centuries, 21 September 2000, lot 24 (£185,000).

This astrolabe is one of the last two instruments known to have been produced by Arsenius, and the last known under his own name, the other instrument dated 1579 (a simple theodolite and horizontal sun-dial), having been made in collaboration with Ferdinand Arsenius.

Description of the 1579 Arsenius Astrolabe

Rete for forty-one of forty-three named stars each name followed by the astrological domiciliation of the star and a number indicating its magnitude. The stars marked are

The two missing stars are likely to be Crus Aquarius and Cauda Capricorni.

The rete employs the design characteristic of Arsenius’ astrolabes built up of interlacing strapwork forming a tulip design inside the ecliptic circle developing into a near-symmetrical flowing pattern around a lower central motif, between the ecliptic and the tropic of Capricorn, which can be interpreted as the bulb of the flower above. The pattern shown here, with two straight vertical bars in the lower motif, is typical of Arsenius’s later work, although no two of his retes are exactly alike. The apex of the tulip motif, whence all the strapwork derives, is set at 0° Capricorn, and a vertical slot cut in the ecliptic ring between 30° Sagittarius and 0° Capricorn acts as a Capricorn pointer (the index that locates the ecliptic circle against the degree scale on the limb). A section of strapwork that should run along the left edge of the limb from 10-55° to reconnect with the eliptical scale in Aquarius is missing. The ecliptic is divided into the twelve signs with their names and symbols, each sign being divided to single degrees numbered by groups of five. Coinciding with this is a month calendar, each month being named, numbered and divided to single days (February 28). Although the reverse of the rete has been filed flat, some traces of construction lines can still be seen.

The mater is fitted with a characteristic screwed-on throne composed of a curved strip carrying a central escutcheon. The face of this is recessed to carry a small compass of which the wood bowl remains in place although the needle and glass are missing. The reverse is blank. Two, well realised, reclining figures one male, one female, flank the compass. These figures are usually referred to as satyrs but since these attendants of Bacchus are strictly male, the figures here must be a satyr and a nymph, less probably a satyr and a Maenad or, since the legs depicted in earlier versions have disappeared, a mermaid and a merman. The figures correspond with those of the first group distinguished by Van Cleempoel with hair combed back and the male figure beardless. The suspension apparatus, set on the top of the escutcheon, is composed of an eared roundel and a swivel pin. The limb is engraved with equal hours numbered I-XII-I on a scale shared with four quadrants of degrees 90-0-90-0-90 reading from immediately beneath the throne and numbered in groups of 10°. The interior of the mater is engraved with a quadratum nauticum (see below). This consists of a square divided into four equal quarters by two intersecting straight lines representing the meridian and the equator, and simultaneously the north, south, east and west rhumbs of the compass diagram centred on their point of intersection. This diagram fills the centre of the square, its circumference representing the horizon. The edges of the square are each divided by counter-hatched scales to 90°, those to the left and right of the north/south meridian line representing degrees of longitude, and those above and below the east/west, equinoctial line, degrees of latitude. The compass directions in the centre of the square are here given in the classical, Mediterranean way by the Latin names of the winds, with the exception of the cardinal points named outside the square as Septentrio (north), Oriens (east), Meridies (south), Occidens (west). The corners between the square and the circle carry the names Greco (north east), Syrrocho (south east), Lebeccio (south west), Magistralis (north west). Within the circular band are the names

Alternate lines radiating from the centre carry the names for

At the south point, immediately below the centre of the throne and beside the receiving hole for the tabs of the plates the word levant is engraved together with a star at the top of the meridian line but which have no apparent purpose. Possibly this plate used for the mater was originally intended for a different function

Reading from the outer edge inwards, the back of the instrument is engraved with:

A scale of degrees in four quadrants 90-0-90-0-90 subdivided to 30’, reading from the south point beneath the centre of the throne. A zodiacal calendar (0° Aries = 11 March) with numbered and named signs, each with its symbol, divided to 1° subdivided to 30’. The months are divided to single days by a counter-hatched scale marked with the names of major saints days. A scale of unequal hours with roman numerals, divided to 4 minutes by a counter-hatched scale. In the upper two quadrants, an equal hour diagram with dashed lines identified by Arabic numerals, the morning hours being to the left of the meridian, the afternoon hours to the right. In the lower two quadrants a double shadow square of coinciding twelve and sixty divisions reading to 2°. Signature engraved in a single line beneath the shadow square.

The counter-changed alidade is engraved with an undivided hour scale and carries vanes with double pinnules and a top sighting slot. It is secured by a decorative wing nut and screw-threaded pin the head of which is decorated with a star. Decoration of the pin-head is also found on astrolabes dated 1565 (Oxford), and 1573 (Florence). The nut and pin also hold a rule on the front of the instrument in place. This rule is marked with north and south declination scales and carries a radial degree scale 15-90 in numbered groups of three, with the value 37°20’ specifically marked, and the label ‘Elevationes poli pro lamina generali’ (heights of the pole [ie latitudes] for the general plate). This implies that the rule was originally intended for use with a plate carrying a universal projection.

This diagram, frequently deployed by Louvain makers and those influenced by them but by relatively few others, was probably devised by Arsenius’ uncle Gemma Frisius who described it in his 1550 Antwerp edition of Peter Apian’s Cosmographia. The purpose of the diagram was to enable a seaman to find the course between two points, of which the latitude and longitude were known, without calculation. In use he would subtract the lesser of his two sets of coordinates from the greater; marking the difference of latitude – if negative, below the east-west line (south latitude); if positive, above (north latitude) – with a thread stretched across the latitude scales. The difference of longitude was marked in a like manner: to the left of the meridian if negative (east longitude), to the right if positive (west longitude). The point of intersection then represented the position of the destination, the underlying rhumbs the course to be steered.

Koenraad van Cleempoel, A Catalogue Raisonné of Scientific Instruments from the Louvain School, 1530 to 1600, Turnhout, 2002

We are very grateful to Anthony Turner for cataloguing the present lot.