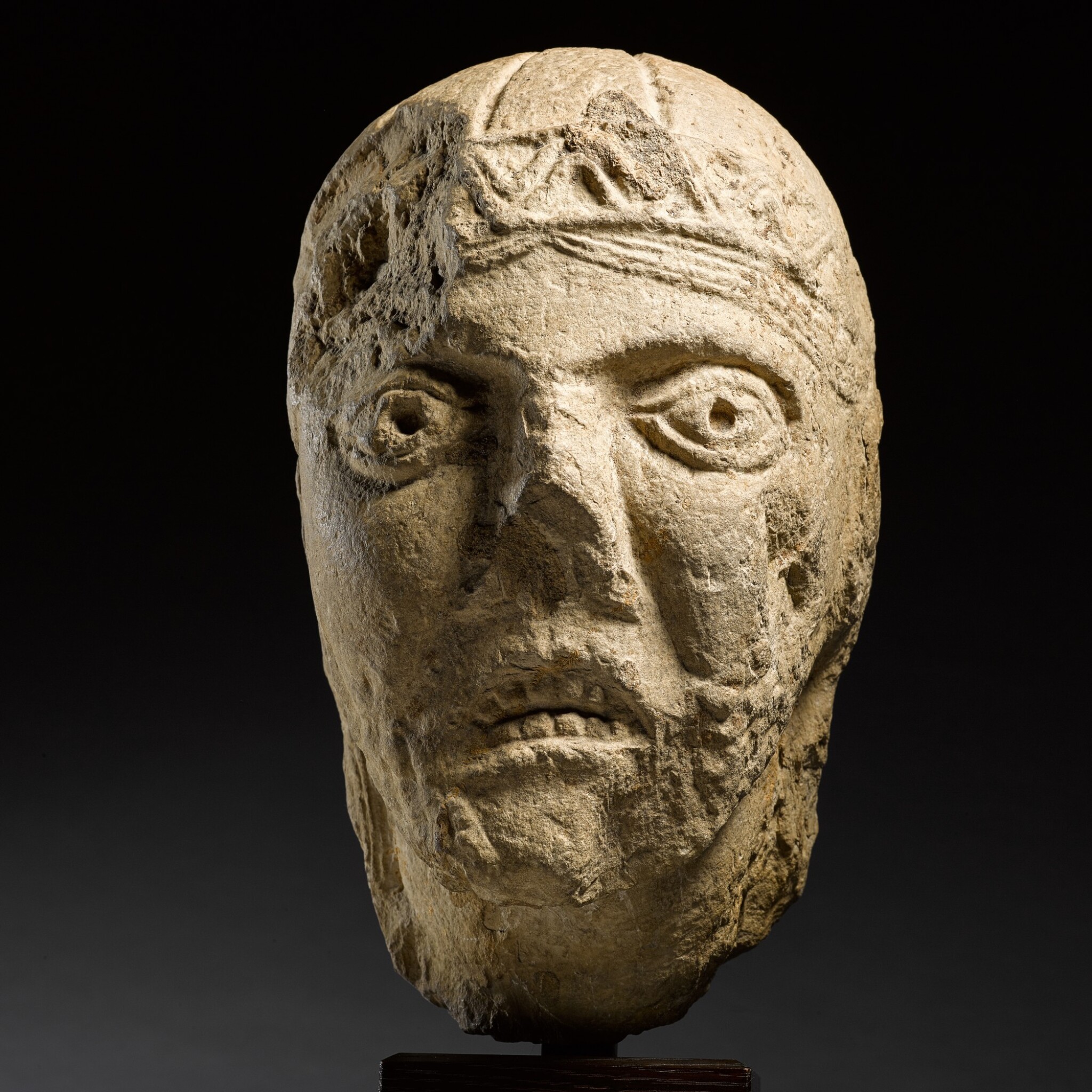 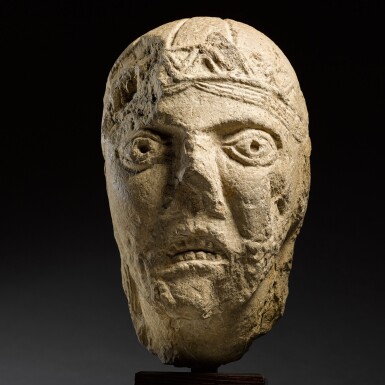 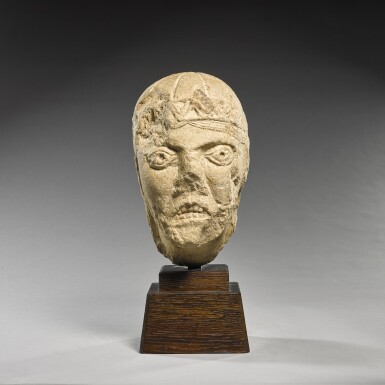 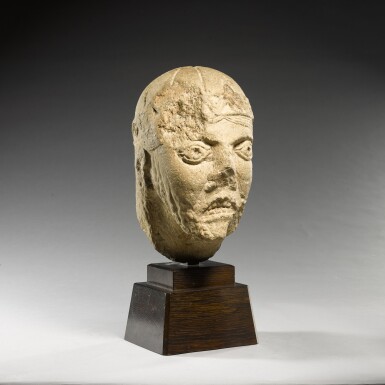 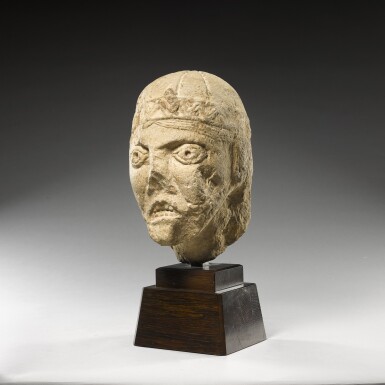 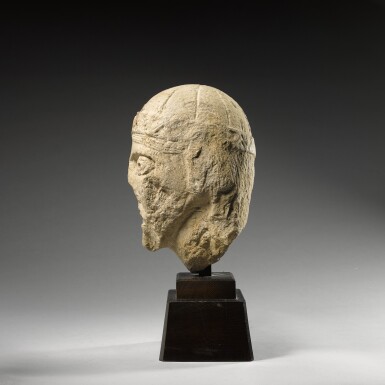 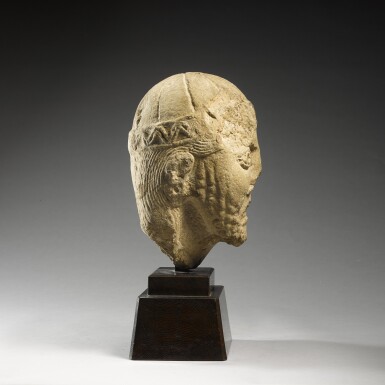 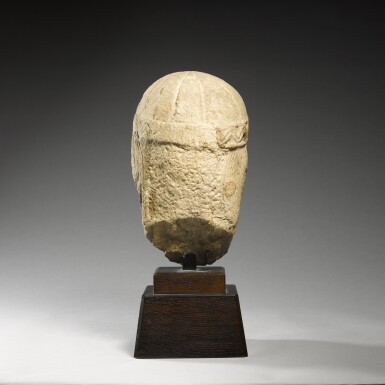 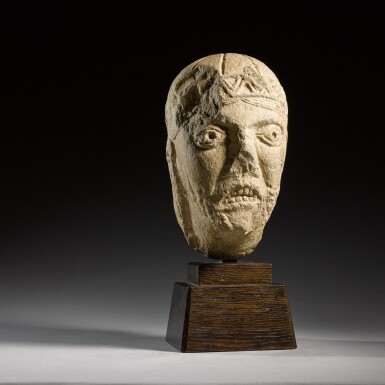 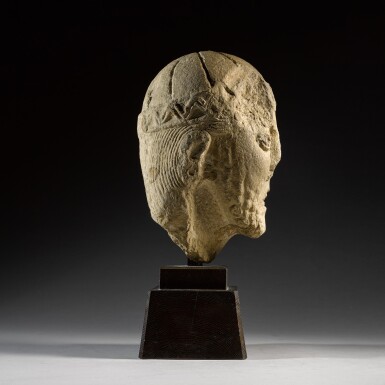 Property from a Private Collection, Ghent

limestone, on a wood base by the Japanese cabinetmaker Kichizô Inagaki (1876-1951), Paris, incised with his monogram

There is minor wear to the wood base, including a few nicks and minor abrasions.

Gustaaf Vanderhaegen, Ghent, acquired from the above;

thence by descent to the present owner

This powerful grimacing stone head is an evocative and enigmatic fragment from the height of French Romanesque sculpture, on the cusp of the emergence of the Gothic style in northern France.

Stylistically the head is datable to the second quarter of the 12th century. The engraved strands of hair combed in a wave around the ear find a comparison in, for example, a western French Head of a King from the mid-12th century in the Metropolitan Museum of Art, New York (inv. no. 44.85.1). Other features such as the broad-lidded eyes with hollowed pupils point towards a possible origin in Burgundy around 1130; a similar facial type is found in the work of the influential sculptor known as Gislebertus at the church of Autun Cathedral (circa 1120-1135). Compare, for example, the figure of Joseph in the Flight from Egypt illustrated in Gaborit, op. cit., p. 197. A further indication for a possible Burgundian origin is provided by a relief of Saint Michael from Nevers, dated circa 1125-1150 (Musée du Louvre, inv. no. RF 1427), which displays a similar facial shape and rendering of the eyes, as well as bead-like texturing in the Angel’s hair which is analogous to that in the present head’s beard.

The original context and iconography of the head is, however, more difficult to ascertain. It is the terrifying grimace, with bared teeth, that makes it a particularly rare survival. While grimaces of this kind appear widely in Romanesque sculpture, they are mostly seen in grotesques on capitals and corbels, or in figures of daemons and the damned (see reliefs at Autun illustrated in Gaborit, op. cit., pp. 139 and 200). The present head, on the other hand, appears to have come from a free-standing statue and, with its headgear, is iconographically consistent with representations of Old Testament figures. A stone head identified as a Prophet from Saint Denis, circa 1137-40, now in the Cluny Museum, Paris (inv. no. Cl. 23415) displays a comparable, though more elaborately decorated, flat crown with a zigzag pattern. It is unusual, however, for such Old Testament figures to be shown with bared teeth. When it was sold in 1954, the present head was described as a guerrier (warrior) from the period of the Crusades, a compelling if perhaps tenuous hypothesis. Past scholarship has on occasion argued that Romanesque figures displaying such grimaces in the context of battle could be a representation of Saracens, symbolising a dangerous 'other' to be conquered by faith (see Durliat, op. cit., pp. 434-435). While such an identification cannot be convincingly sustained for the present head, the intimidating nature of its expression would support that it was conceived in a context of ungodliness or religious strife.

The wood base bears the mark of Japanese wood artist Kichizô Inagaki (1876-1951). His bases are celebrated as works of art for their own sake because each is created to fit its sculpture perfectly, sculpture and base ultimately unifying as a cohesive object. Beyond bearing the mark of such a distinguished woodworker (literally stamped with his artist name, 'Yoshio'), works mounted on bases by Inagaki share the provenance of having been on the Parisian art market between 1911 and 1951. While working for Joseph Brummer, Inagaki made prestigious connections among key dealers, collectors, and avant-garde artists in early 20th century Paris and thereby gained his greatest commissions. Auguste Rodin, for example, put Inagaki in charge of creating bases for his entire collection of antiquities in 1912. Inagaki also worked closely with dealers Dikran Khan Kelekian, Charles Ratton (through whose hands the present lot passed in 1949), and Paul Guillaume, creating bases for the majority of Albert Barnes’s sculptures.