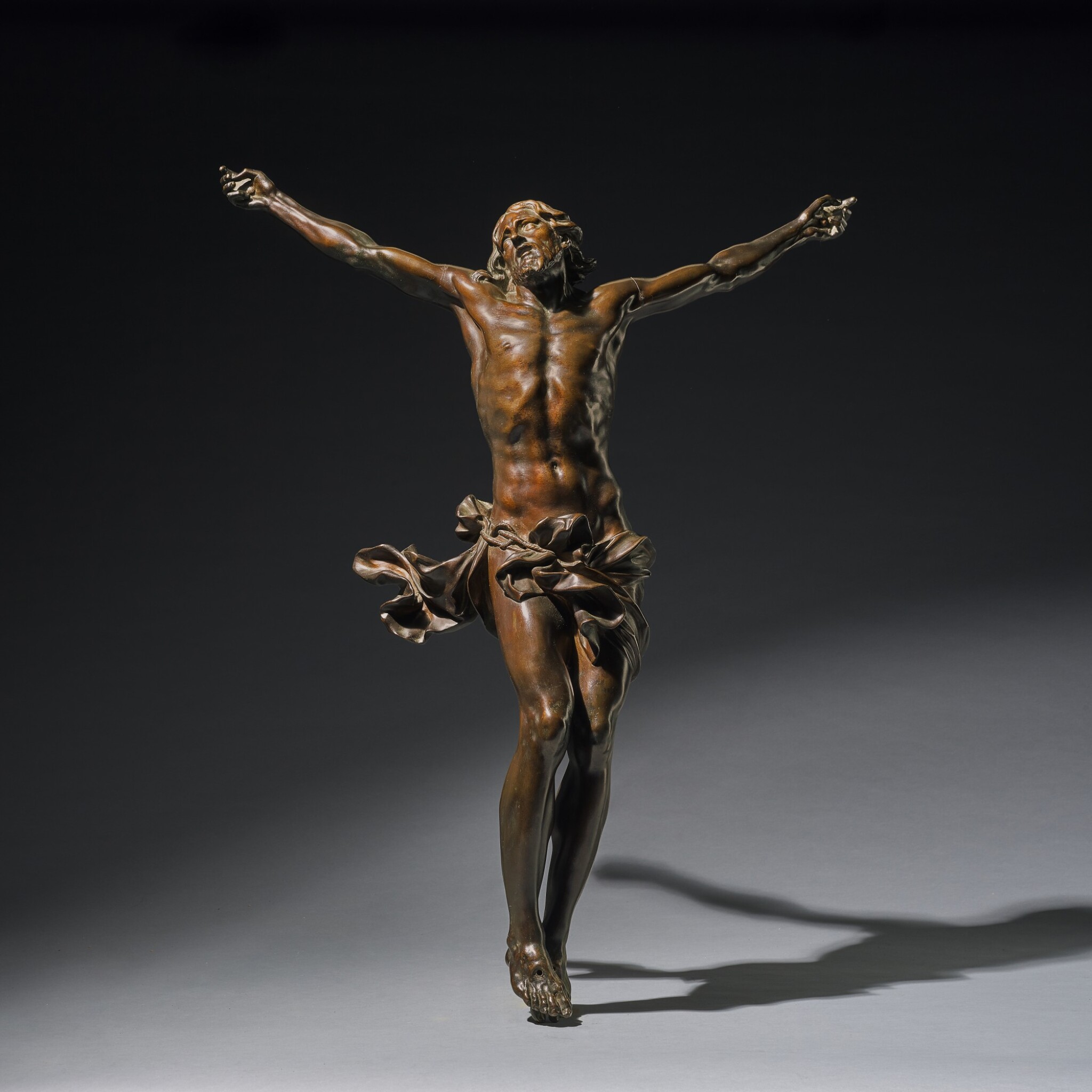 bronze, with modulated patina and traces of orangey lacquer

The corpus is overall in very good condition, with some remains of original lacquer, mainly in the torso and perizonium. There is some historic wear to the patina, consistent with age, notably on the high modelled areas, such as the biceps, rib cage, around the knees and shins. There is minor old dirt in the hair, beard, hands and feet. There are original casting joints on both shoulders; that on his proper left shoulder is very slightly open. These joints are stable and original pins are visible. There is a small casting flaw on the edge of the perizonium on his right hip, resulting in a small hole. There are two small original casting holes in the head which were probably initially plugged. A small disc of bronze pinned to the top of the head indicates where there would have been a halo. There is a hole in the perizonium at the back, which is threaded, indicating a former fixing point. There is a hairline seam around the join of the perizonium to the right hip, suggesting it was likely cast separately. Christ's back has various surface abrasions, notably to the back of the hands, left forearm and ribs. Some more extensive wear to the patina on the back of the perizonium and the left heel indicate where the figure touched the original cross, and around the holes for the nails in the feet. Otherwise the condition is very good.

by descent in the Pignatelli Aragona Cortes family;

acquired in the 19th century by John Fraser-Frisell;

This large and powerful bronze of the Cristo Vivo is an exceptional 17th century cast, which retains a beautiful lightly brushed surface that enhances the subtle, yet vigorous modelling of the anatomy. The bronze is expertly cast and finished with restraint and delicately chased. The patina retains areas of a vibrant orangey colour, that enlivens the surface when caught by the light. The identification of this model as Algardi's forms a fascinating case study of the advance in scholarship on Baroque sculpture in the last 50 years, which owes much to the pioneering work of Jennifer Montagu.

Algardi made two main types of Crucifixes: a Cristo Morto (the ‘Alamandini’ type) and a Cristo Vivo (the ‘Pallavicini’ type). Named after the patron Ercole Alamandini, the Cristo Morto Crucifix is derived from the extraordinary painted clay life-size model in the church of Santa Maria in the Vatican, given by Algardi himself to the Rector there. It is notable that Algardi adopted the unusual iconography of two nails through Christ’s feet. The bronze commissioned by Alamandini was placed above the altar of SS. Giovanni e Petronio dei Bolognesi in Rome in April 1644. It is known in only a few casts, such as that in the Cappella del Crocifisso in SS Vittore e Carlo, Genoa and some reduced versions.

The present Crucifix is a prime example of Algardi’s Cristo Vivo model, known after the bronze in the Palazzo Pallavicini-Rospigliosi, Rome, which in the mid-1950s was connected by Federico Zeri with a model by Bernini, mentioned by the 17th-century biographer Filippo Baldinucci. Zeri’s discovery stimulated a debate about the work in which many scholars failed to see the hand of Bernini. First, Rudolf Wittkower (op. cit.) questioned the attribution to Bernini, favoring one to Algardi, with some reservations. Subsequent scholars, including Antonia Nava Cellini (1967), Montagu (1985), and Allen (2014), have convincingly proposed Algardi’s authorship. In addition to the demonstrable stylistic affinities with Algardi's late work, such as the Jupiter andiron, further evidence for Algardi's authorship is provided by three related drawings attributed to him in the Galleria Estense, Modena (inv. no. 980) the Uffizi (inv. no. 3427S) and the National Gallery of Art, Washington (inv. no. 1992.42.1) as well as some engravings by Jean Baron and others (Montagu 1985, op. cit., pp. 339-340, nos. 16.E.1, 16.E.2 and 16.E.3). Dating to around 1646, the last decade of the sculptor's life, the model was probably originally conceived for a lost silver Crucifix made for Pope Innocent X Pamphilj. A posthumous inventory of Prince Camillo Pamphilj in 1666 describes such a silver corpus of the living Christ, importantly depicted with nails in both feet (a very unusual feature at this date), and measuring three palmi high (around 70cm).

A further interesting attributional tangent with this Cristo Vivo model is Klaus Lankheit's proposal that a silver cast in the Treasury of San Lorenzo, Florence, (Montagu 1985, op. cit., p. 329, no. 16.C.4) could be ascribed to Massimiliano Soldani Benzi, on the basis of a letter of 19 June 1688 the sculptor wrote to Apollonio Bassetti, in which he describes a Crucifix he had made, 'cosa del tutto nuova'. Whilst we know from correspondence with the Prince of Liechtenstein that Soldani had access to Algardi's models, the disparity between the details of the relevant documents and the main features of the Pallavicini Cristo Vivo make the Florentine's authorship impossible; that Soldani could have made casts after Algardi's Crucifix is, however, quite possible (See Allen, op. cit., p. 236, fig. 1) .

In 1985, Montagu observed that 'we are surely justified in identifying it [Algardi's Cristo Vivo] with one of the, if not the, most popular Crucifixes of the baroque era.' It is apparent from the list of versions known to Montagu in 1985 (op. cit., pp. 327-340) that Algardi's Cristo Vivo inspired multifarious versions in all kinds of material (silver, ivory, wood, gesso, marble, porcelain etc.) and of varying affinities with the original model. Which of the best bronzes is the closest to the casts that would have been made by Algardi, or authorised by him from his workshop, forms an intriguing connoisseurial question.

An outstanding cast in the J. Tomilson Hill collection is finished with an exceptional attention to detail, which is mostly in the cast, but with final crisp chasing in areas such as the hair and beard. The eye lids are crisply delineated, even the undersides of the feet are modelled. The present cast is more loosely finished, with the beard and hair left, more or less, untouched from how it came out of the casting. This feature connects it more closely with the bronze in S. Maria del Popolo, exhibited in the 1999 exhibition L'altra faccia del barocco (see cat. no. 33) that was considered by Montagu to be one of the best examples known and typical of the late bronzes produced in the studio of the sculptor, although not always under his direct supervision. The finish of the present cast and that in S. Maria del Popolo, which Montagu describes as a 'finitura assai pesante', is found in a number of other exceptional bronzes in museums, such as the closely comparable cast in the Art Institute of Chicago (inv. no. 204.42). Therefore, the present exquisite bronze should be ranked alongside the best casts of this model known from Algardi's workshop, with all the characteristics of a fine lifetime cast, while the prestigious provenance further indicates Algardi's direct involvement.

Antonio Pignatelli (1615-1700), who became Pope in 1691, was from an aristocratic Neapolitan family. In the 1640s he had a diplomatic career under Urban VIII, followed by various episcopal positions between 1652 and 1686 when he was appointed Archbishop of Naples. His papacy is remembered for his stand against nepotism and simony. Whilst there is no documentary evidence for a Pignatelli provenance for the present Crucifix, it has remained a tradition connected with it since the 19th century. The writer John Fraser-Frisell (1774-1846), who formerly owned this Crucifix, was described as 'le Greco-Anglais' by Chateaubriand. A committed francophile, he was imprisoned twice, in Dijon in 1793 and again in 1803. He lived in Paris and was close friends with Joseph Joubert and Chateaubriand. In 1820 he published his only work: Etude sur la Constitution de l'Angleterre, avec des remarques sur l'ancienne Constitution de la France'.