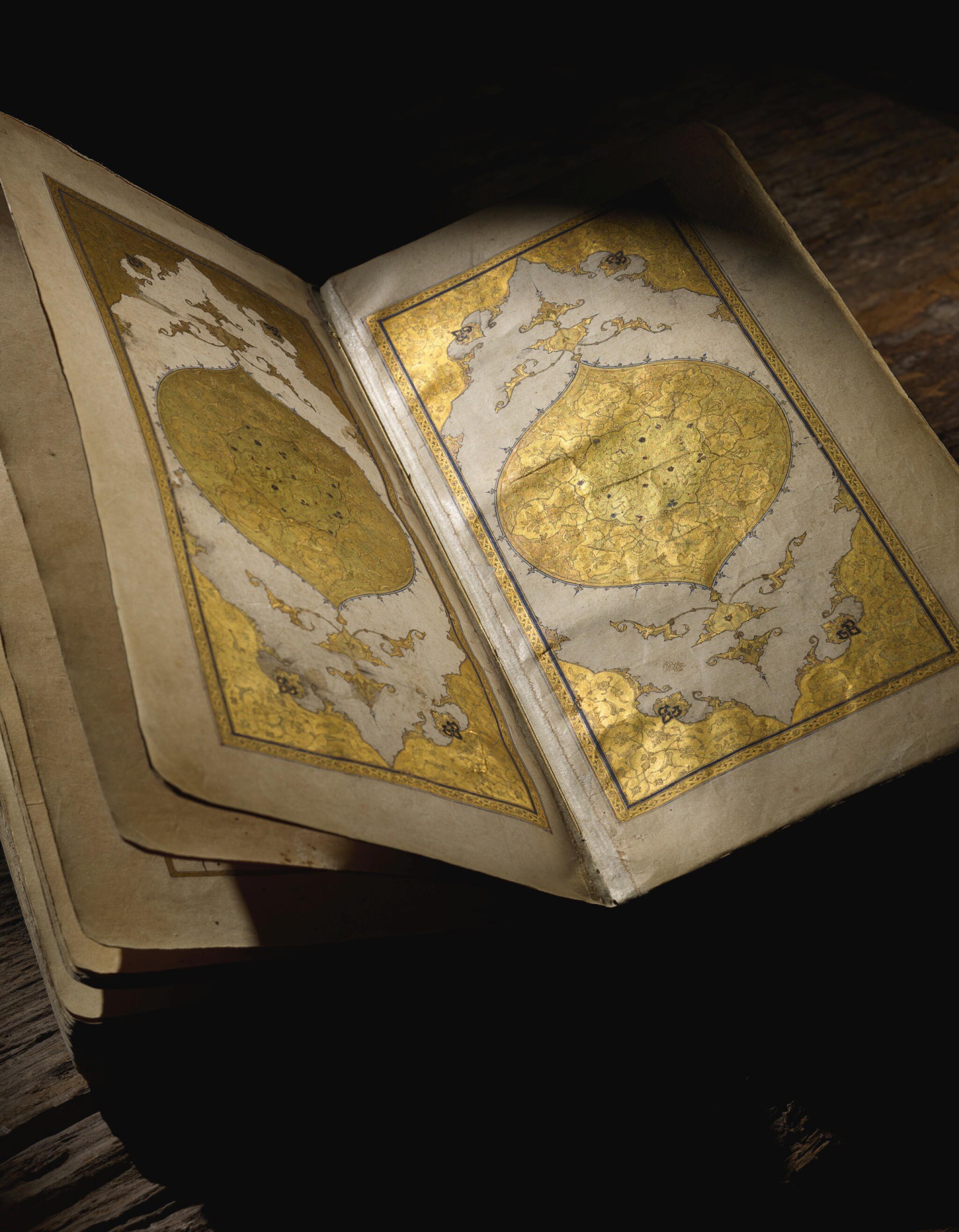 Persian manuscript on polished paper, 160 leaves plus 4 fly-leaves, 17 lines to the page, written in elegant nasta’liq in black ink, text divided into two columns, ruled in black and gold, headings in gold outlined in black, f.1b and 2a with a double-page spread of illumination consisting of a central panel in two tones of gold with a dedication to Pir Budaq, f.2b with an illuminated heading, f.160b with an illuminted finispiece in gold, blue and black, in a brown leather stamped and gilt binding

In good condition, the margins have been trimmed and some of the catchwords are not completely readable, they are though clean with only minor stains and occasional smudges, some ownership inscriptions on the fly-leaves, the double-page spread of illumination with minor losses affecting mainly the medallion on the right hand side, the binding with minor restoration and scratches, as viewed.

Jafar Ghazi was a well-known figure in the Islamic art market throughout the second half of the twentieth century, participating in countless auction sales, as well as buying privately. Arriving in Europe from Iran at a young age, Jafar Ghazi settled in Munich, where he housed his large library of manuscripts. He acquired many treasures, notably an imperial manuscript written for Mehmet II (sold at Christies, 7 October 2008, lot 375), as well as a group of fifty fine mansucripts sold in these rooms, 11 October 2016.

The dedication on f.1b and 2a reads as follows:

‘For the Library of the shadow of God the Propitious, refuge of emperors of the time, Abu’l-Fath Pir Budaq Bahadur Khan, may God help him with victory and benevolence’

This magnificent manuscript bears a dedication to one of the most important patrons of the arts of the book in fifteenth century Central Asia, the Qara Qoyunlu prince Pir Budaq (d.1466). While book production in Timurid Persia dwindled due to conflicts and political instability, other centres of patronage flourished and welcomed artists from all over the region. Pir Budaq was an important member of this cultural movement and a keen bibliophile. Numerous manuscripts dedicated to him have survived in institutions and private collections today. The current previously unrecorded Diwan is testament to Pir Budaq’s bibliophile pursuits and an important witness to the grandeur that must have been his library.

Pir Budaq was the eldest son of Jahan Shah (r.1439-67), a Qara Qoyunlu ruler who controlled what is today Azerbaijan early in his career. After the death of the Timurid ruler Shahrukh in 1447, Jahan Shah expanded his reign, conquering Sultaniyya, Hamadan, Qazvin and later Qum, Isfahan, Shiraz and Yazd. Pir Budaq participated to the last military campaigns in Shiraz (1452) and Yazd (1453), and soon after was given the governorship of Shiraz (1456), an appointment which lasted only two years. Due to his rebellious nature and wish for independence, in 1458 Jahan Shah ordered Pir Budaq to move to Baghdad, closer to the capital Tabriz. Pir Budaq obliged and in 1461 moved to Iraq, along with "a caravan of people of Shiraz [comprising] its artists, scribes, and master craftsmen" (Roxburgh 2014, p.182).

The years he spent in Baghdad were politically turbulent, as he challenged his father’s authority coining coins with his name and presenting himself as the rightful ruler. This lasted until his father Jahan Shah and his brother Mirza Muhammad marched against Baghdad in 1465, conquering it after an eighteen-month siege, which ended with the death of the prince on 16 June 1466.

Despite the political turmoil, Baghdad became and important cultural centre thanks to Pir Budaq, who moved his entire court from Shiraz. The city flourished as a centre for manuscript production, the present Diwan a testament to this renaissance.

Roxburgh divides the corpus of manuscripts associated with Pir Budaq into two groups "distinguished by the presence of absence of an ex libris documenting the prince’s ownership" (Roxburgh 2014 p.184). From the first group, four manuscripts are listed as being copied during the Baghdad period, this volume becoming the fifth specimen. The manuscripts dated to the Baghdad period, divided according to Roxburgh’s groups, with and without an ex libris, are given below.

B. Manuscripts lacking a dedication, copied under the patronage of Pir Budaq in Baghdad, in chronological order:

The above list of surviving manuscripts from the library of Pir Budaq in Baghdad provides us with an intriguing view of the activity of his kitab-khane. The illumination, calligraphy and binding of all of these volumes is of the highest quality and can be linked to the Herat and Shiraz traditions, which were both embraced and patronaged by Pir Budaq in Shiraz and later Baghdad.

“Transmission—and knowledge of the earlier Herat tradition—was effected through Shaykh Mahmud, a living repository of that art history and its practices (and a direct student of Jaʿfar al-Baysunghuri), and presumably also through books acquired by Pir Budaq after the occupation of Herat in 1458.” (Roxburgh, p.216-7.)

Shaykh Mahmud came under Pir Budaq’s patronage as early as 1456 and he joined a flourishing and vibrant court in Shiraz as an up-and-coming calligrapher. He is recorded by Bayani as a pupil of Ja’far al-Baysunghuri and followed Pir Budaq when he moved to Baghdad (Mehdi Bayani, vol.III, pp.891-4). He copied eight out of the twelve manuscripts with Pir Budaq’s ex libris and three out of the four attributed to Pir Budaq’s patronage but lacking a dedication. Another Diwan of Hafiz copied by him and dated Safar 864 (December 1459), just before the move to Baghdad, is now in the British Library, inv.no. Or.11846. A safina of poetry dated Muharram 865 (October-November 1460) and copied in Shiraz, is now in the Nationalbibliothek, Vienna, inv.no.N.F.143. Another manuscript, titled Risalah dar bayan-e al-mabda’ wa al-ma’ad (‘a Treatise on the Origin and the Return’) of Sa’in al-Din ‘Ali al-Tarkah al-Isfahani and dated to his Baghdadi residence (868 AH/1463 AD) was sold in these rooms, 20 April 2016, lot 16.

The technique of gold-on-gold is a distinctive feature of this manuscript, similar to the Diwan of Yusuf Amiri, also copied by Shaykh Mahmud a year after the current volume. The opening bifolium, with two gold shamsas bearing the name of the prince, is a testament to the high level of book-production achieved at the Baghdad court, making this volume an important example of the Qara Qoyunlu contribution to the art s of the book in Central Asia.

For the a comprehensive study on the court, library and patronage of Pir Budaq see David J. Roxburgh, ‘Many a Wish Has Turned to Dust: Pir Budaq and the Formation of Turkmen Arts of the Book’ in Envisioning Islamic Art and Architecture, Leiden, 2014.