Arts of the Islamic World & India including Fine Rugs & Carpets 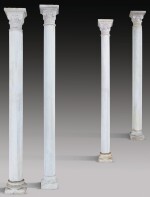 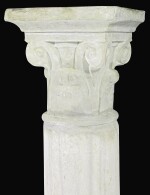 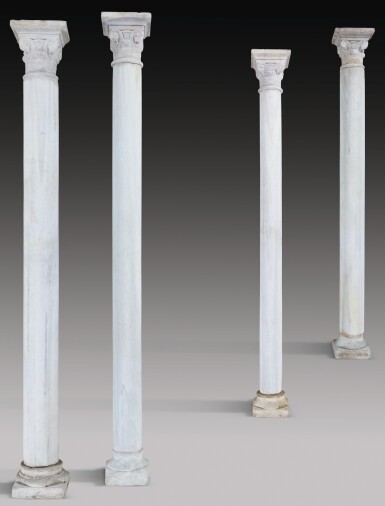 comprising four monumental marble columns each topped by a capital of cylindrical form carved to square section with large scroll ornaments and petalled details, each on a square base

To request a condition report for this lot, please contact Alexandra.Roy@sothebys.com

Purchased by Arthur Byne on behalf of William Randolph Hearst.

Bearing testimony to the enduring power of Nasrid carved masonry, the present columns display a precision of form evolved over centuries evincing a stylisation of classical shapes, rhythmic patterning and naturalistic details. Recognisable as a rarefied descendant of the Corinthian order – with attenuated, unfluted shafts and unfussy capitals adorned with spare volutes and acanthus leaves – these columns illustrate how the Muslim rulers of al-Andalus adapted a pre-existing vocabulary of Hispano-Roman and Visigothic architecture.

Rising to power at the beginning of the thirteenth century, the Nasrid dynasty ruled Granada and neighbouring Jaén, Almería, and Málaga in the southern Iberian Peninsula from 1230 until 1492. Although politically diminished compared to their predecessors and harried by insistent pressure from Christian armies to the north, the Nasrids maintained a defiant public image of artistic grandeur which looked back nostalgically at the glories of an Islamic rule. While elaborating upon the traditions of the Almohads and Almoravids, Nasrid architecture was unrestrained by the conservative attitudes of the latter dynasties, cultivating an image of opulent refinement where “an idea of elegance replaces that of strength” (Marçais 1954, p.359). Dedicating themselves to the decoration of their splendid palaces in the fourteenth century, the Nasrid Sultans are most famous for the construction of the Alhambra (al-qal‘a al-hamra), or the 'red castle', a monumental royal city celebrated as one of the world’s most magnificent examples of Islamic architecture.

The present four columns are expressions not only of the aesthetics of their time, but also of a specific collector's taste, that of William Randolph Hearst. These originally came from a castle in Navarre and were purchased by the dealer Arthur Byne for Hearst, who had them sent to Hearst Castle at San Simeon in June 1935. They were subsequently exhibited at the Los Angeles County Museum of Art’s exhibition: Man came this way: Objects from The Phil Berg Collection from 9 March to 30 May 1971 (illustrated here).

Notable are the capitals crowning these columns which can be linked to a group associated with the city of Seville in the late-Islamic period. The Casa de Pilatos, a grand Sevillian palace begun at the end of the fifteenth century, incorporates in its early sixteenth-century courtyard capitals of the same basic form. In addition, identical loose capitals are found in the gardens of the Alcazar in Seville, suggesting re-use from an earlier building.

A capital of related form, attributed to Seville, fifteenth century, was offered in these rooms, 28 April 2004, lot 66.

Arts of the Islamic World & India including Fine Rugs & Carpets