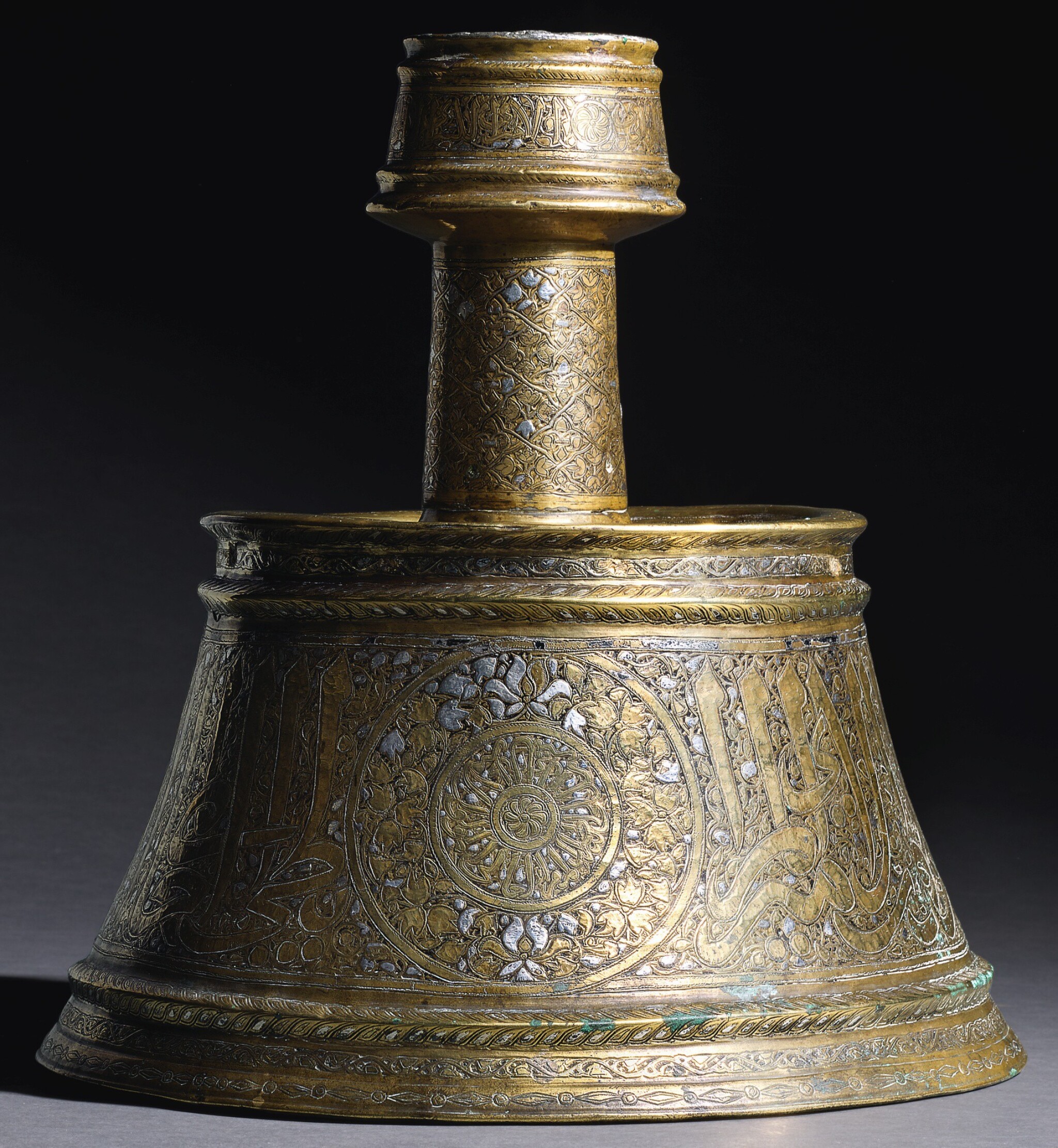 the base of truncated conical form encircled by two pointed ridges, the projecting shoulder leading to a concave driptray, the cylindrical neck surmounted by a broad socket tapering to the mouth, decorated with bands of calligraphy and roundels also containing calligraphy written in a circle and stylised lotus patterns, further foliate motifs to neck, vestiges of silver-inlay, old European collection number '174...' written on inside

The candlestick with some silver-inlay remaining although most missing, few dents to body and nicks througout, the neck with a break and associated restoration, rim with associated restoration, interior reveals extensive oxidisation (a little also visible on exterior) and small breaks in body, scratches and discoloration, for further preservation of this piece, please consult a professional conservator, as viewed.

Around the mouth and body: 'High Authority, the Lordly, the Possessor, the Learned, the Diligent [the officer of al-Malik] al-Nasir'

Around the shoulder: 'High Authority, the Lordly, the Great Emir, the Conqueror, the Learned, the Diligent, the Possessor, [the officer of] al-Malik al-Nasir'

The Mamluk sultans ruled over key territories in the Islamic world including the holy cities of Mecca, Medina and Cairo which, as the Mamluk capital, developed into an artistic and cultural powerhouse of paramount significance. The period would see an extensive patronage of art and architecture as a means to display wealth and political power. Mamluk elites constructed lavishly decorated mausolea, madrasas and mosques which in turn necessitated the growth in the production of decorative objects.

Surviving Mamluk metalwork consists of bowls, dishes, boxes, arms, armour and candlesticks. Much of the inlaying techniques and styles were derived from a pre-existing tradition with its roots in twelfth-century Persia and Iraq which gradually spread westwards. By the thirteenth century high-level metalworkers excelled at intricately inlaying silver and gold into brass or bronze wares. Many of these artisans had migrated from the East to escape the socio-economic upheavals caused by the Mongol invasions (Yalman 2001). By the fourteenth century the European and Mediterranean export market became an important revenue stream for such objects resulting in increasing diplomatic exchanges. Venetian merchants were crucial to the wider export of Mamluk metalwork and several cities under the Mamluk Empire had permanent Venetian diplomatic presences.

Candlesticks of the design and quality of the present work were largely produced in the first half of the fourteenth century, exhibiting a splendour that reflected their important role in Mamluk ceremony. By this period, figural compositions that had characterised earlier Mamluk metal ware, such as the ‘Baptistere de Saint-Louis’ (Louvre, Paris, inv. no.LP16), had been replaced by a more austere taste for large calligraphic panels. The use of bold thuluth script grants such designs a monumentality and gravity appropriate for a form frequently donated as a pious bequest (waqf) to a mosque. The classic configuration of the candlestick’s design, with its distinctive ridged profile and majestic rhythm of the main inscription band, mark this out as a product of the reign of Sultan al-Nasir Muhammad ibn Qala’un, whose long and relatively peaceful rule (1293-1341 AD) witnessed the apogee of Mamluk metalwork (Atil 1981, p.52).