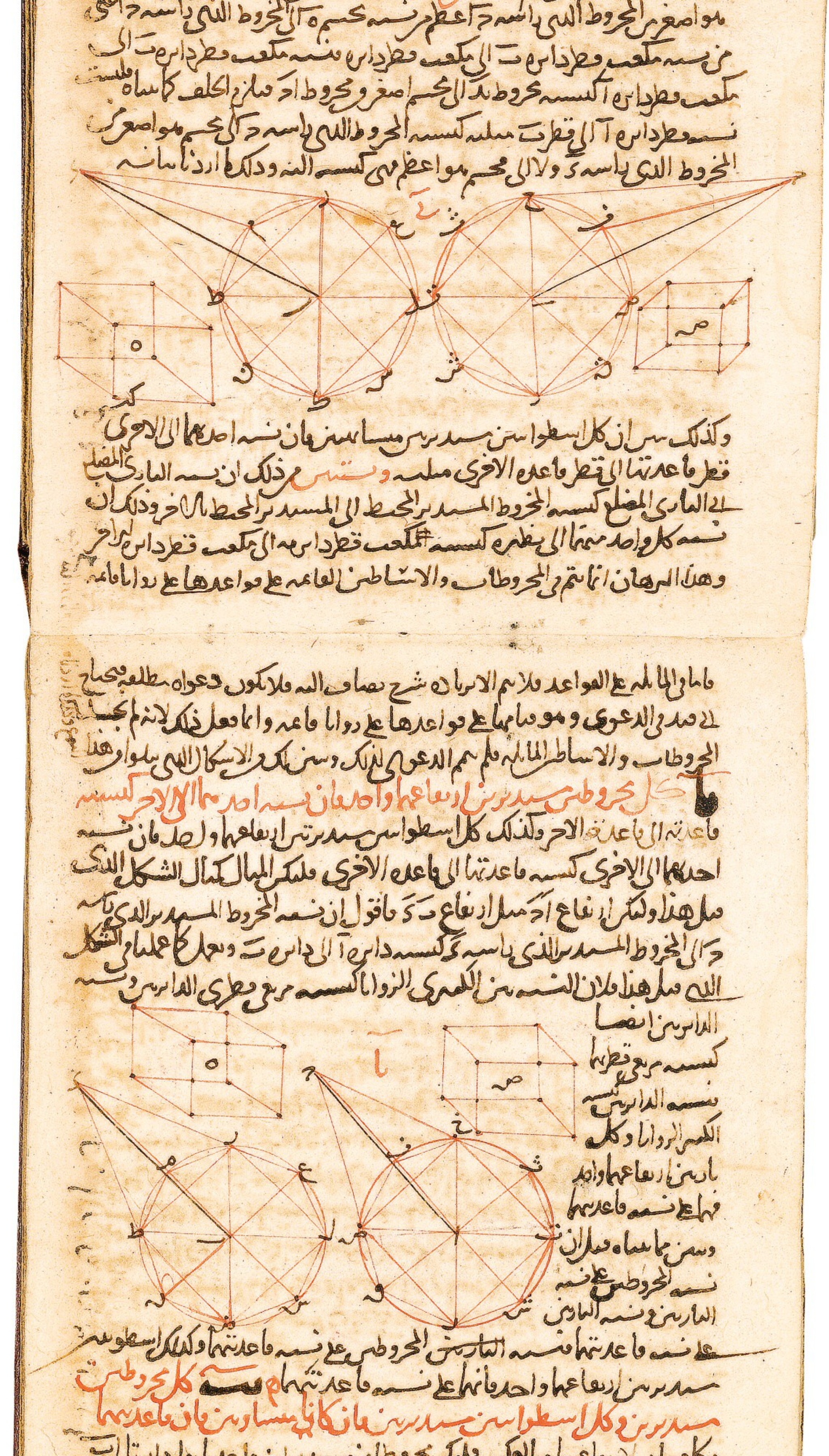 Arabic manuscript on paper, 100 leaves, 32 lines or fewer to the page in black and brown inks in two or more hands, with text parallel to the shorter side, bound with the text on the back of each folio leading directly to the text on the front of the next, theorems numbered in red ink and also the diagrams, in later binding

In fairly good overall condition, the last page with some losses due to worming, some waterstaining at the beginning and end, occasional repairs to the margins, small section has come loose from the binding towards the end, diagrams clear and text generally strong, as viewed.

Euclid's Elements, compiled over 2,300 years ago, is a textbook on geometry and number theory that of any book, apart from the Bible, has had the most readers over the centuries. Until the late twentieth century its theorems formed the basis of school geometry. Euclid aimed to derive as many conclusions as possible starting from the fewest number of assumptions or postulates. He started with ten 'common notions' and 'postulates' and derived 465 theorems as logical consequences in thirteen 'books'. The subjects dealt with are mainly geometry: lines, angles, similar and congruent triangles, areas, the theorem inappropriately associated with Pythagoras, circles, polygons, volumes of parallelepipeds, prisms, pyramids, the sphere, but also number theory, including prime numbers and irrational numbers.

In the Renaissance of learning that took place in Baghdad in the eigth to tenth centuries, the Elements were translated from Greek into Arabic and commented upon. The constructive criticism of Euclid and other Greek authors led to a school of Islamic mathematics that flourished over several centuries. We may mention, for example, Muslim efforts to 'prove' Euclid's famous 'Fifth Postulate', which is equivalent to stating that two lines will be parallel if the interior angles formed by a transversal add up to 180°.

The great scholar and polymath Nasir al-Din al-Tusi (1201-74 AD) was responsible for editions of most of the Greek astronomical and mathematical works that had been translated into Arabic in the eigth to tenth centuries. His enormous output in such editions or recensions was almost matched by his own independent works on those subjects.

This is a fine copy of al-Tusi's Tahrir or recension (edition) of Euclid's Elements, arranged in fifteen books (maqalas). Al-Tusi based his recension on the translations of al-Hajjaj ibn Yusuf in the early ninth century and Thabit ibn Qurra at the end of the ninth century, preferring the latter. Alas the date of copying in the colophon is no longer visible (as a result of over-enthusiastic restoration) so that the last line of the text mentions 516, which is the number of theorems in this edition, not the Hijra date.

The manuscript is arranged in an unusual way, like a modern note-pad, with the text on the back of each folio directly above the text on the front of the next folio: we refer to these as U and L for upper and lower. The title on 2L appears to be original and it suggests that 'most' of the text is in the hand of the author. Since the ensuing text seems to be in a variety of different hands, of which the first is superior but is used for only the first few folios, this remark is curious, and the penmanship of al-Tusi cannot be assumed. (Further research would be necessary to confirm or refute this.) Also, there are different numbers of lines on the page, ranging from 31 (fol.3U) to 21 (fol.45L). The paper is consistent throughout and in keeping with a thirteenth century date of manufacture.

One folio is missing between 30U/30L. Folio 52L/53U appears to have been cut to 1/3 of its original size. Folio 99U is slightly damaged. On folio 100U the last line with the year number has been covered with repairing tape.

The figures are drawn with care throughout the book - see fols. 89U+L for an example. The letters identifying the points on the figures are in red and brown ink throughout.

The title in bold naskh script on 2L translates (text rearranged to make more sense in English): "The recension of Euclid on the Elements, which is a commentary to the 15 books which the scholar and philosopher Khoja Nasir al-Din Muhammad ibn Muhammad ibn al-Hasan al-Tusi - may God prolong his life and extend his might and his world (?) with his Divine Might - put together using (jama'a-hu bi-) the copies of Thabit ibn Qurra and al-Hajjaj ibn Yusuf. Most of the book is in his noble hand."

Being cautious, we might suppose that without further investigation this remark about most of the manuscript being in al-Tusi's own hand cannot be taken at face value. On the other hand, the title is so early that we need not expect any exaggeration.

Above this in a much later naskh hand is the simple title: "The recension of the Elements of Euclid by the scholar al-Tusi." Below this is a mark of ownership that provides a terminus ante quem for the date of copying of at least part of the manuscript: "(This is one) of the books of the wretched slave of God Almighty 'Umar ibn Mahâsin (ibn) 'Abd al-Karim ibn Muhammad ibn Harun al-'Abbasi, acquired (tamallakahu) during the months of the lunar (i.e. Hijra) year six hundred seventy nine. May God grant that its termination be successful (ahsana khatimataha)." The year 679 Hijra corresponds to the year 3 May 1280 to 21 April 1281. (We recall that al-Tusi died in 672 Hijra [1274 AD].) The hand of this mark of ownership is not obviously identical to those of the title or any of those in the main text. The implication is that 'Umar al-'Abbasi acquired an incomplete copy and had the rest of the text completed by others.

On the same page there is another mark of ownership in a tidy naskh hand. It reads: "Owned by Ibrahim (ibn) Ahmad al-Baytar (the veterinarian) al-Sultani (which probably means he worked for a sultan), may God forgive both of them (that is, presumably, both Ibrahim and his father Ahmad).

On fol.1U there are marks of ownership in at least two later Persian hands that are not easy to read: "I purchased this excellent (? al-mustatab) book from ... (?) Mulla Ghulam 'Ulya' for the amount of fifty ... (?), I mean two thousand five hundred - 2500 - dinars ... ... (?) at the beginning of the month of Shawwâl ... (?) day of the months of the year 1120 in the capital of the Sultanate (dar al-saltana) Isfahan, edited by its owner the wretched (slave of God) Rustam Z-n-k-n-h. End." The year 1120 Hijra corresponds to March 1708 to March 1709. The price seems exorbitantly high for the time, even given that some of the text may have been penned by al-Tusi himself. (From a different age and milieu we know that in Cairo ca. 1000 the astronomer Ibn Yunus was paid 100 dinars a day by the Fatimid Caliph al-Hakim, which again seems extremely extravagant. More research would be necessary to assess the equivalents of both these amounts in the appropriate milieus.)

To summarise: This is an important addition to the available manuscripts of al-Tusi's edition of Euclid's Elements. It is one of ten known to predate 1300 (although there could be more). The history of the text in different hands could be pieced together by further investigation of the handwriting. If al-Tusi himself is responsible for the beginning of the text, we can assume that this took place in Maragha in N.W. Iran. The manuscript was acquired still incomplete by 'Umar al-'Abbasi in 1280/81 AD, and at some stage passed to an Ibrahim al-Baytar al-Sultani. In 1708/09 our manuscript was in Isfahan, where for 2500 dinars it passed from Ghulam 'Ulya' to Rustam Z-n-k-n-h, and in 1710 it was apparently sold by Afrasiyab Z-n-k-n-h.