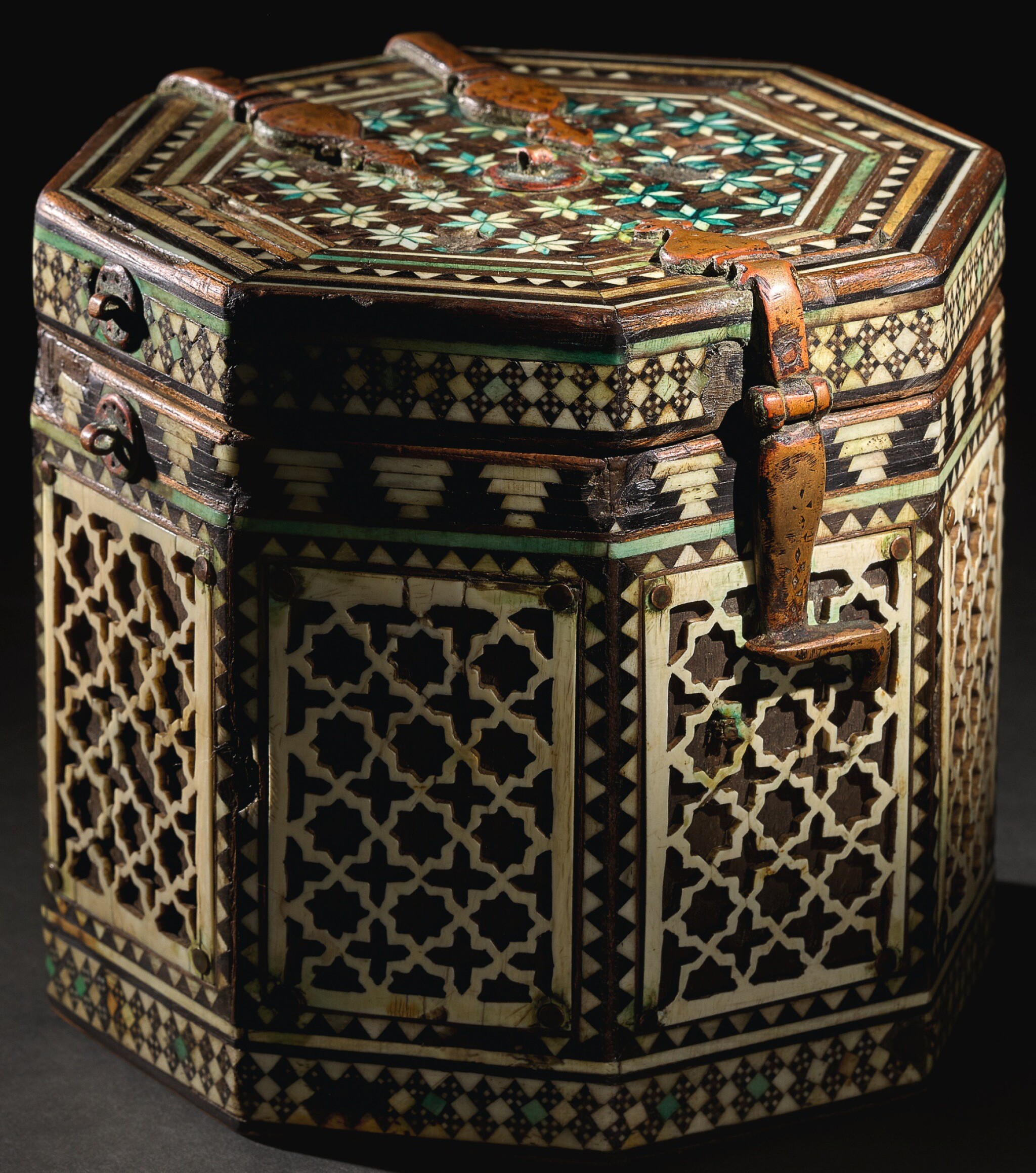 the hardwood (possibly walnut) octagonal body and lid overlaid with natural and blue-stained bone, the main fields of the body decorated with openwork ivory plaques with cross-and-star design and triangular patterned borders and micro-mosaic borders of chequered lozenges and ‘dentated merlons’, the base with an eight-pointed star, copper hinges and part of lock, lock-plate missing, circular copper plaques with ‘eyes’ on the body and lid, possibly originally threading with a cord

The overall design visible, with some wear to surface, notably small chips to wood on lid and associated missing ivory inlay and certosina, further nicks and small chips to rest of body, sections of the openwork ivory plaques with cross-and-star design with minor sections missing or breaks in design and slight warping, the underneath with scratches and small chips, interior revealing small part with old woodworm damage, discoloration in wood, as viewed.

This lot contains ivory. Due to recent changes in the laws of many countries (e.g. US, France) Sotheby’s recommends that buyers check with their own government regarding any importation requirements prior to placing a bid. Please note that Sotheby’s will not assist buyers with CITES licence applications where a buyer elects to either collect or arrange their own shipping, nor will Sotheby’s assist with the international movement of ivory by air, either as freight or through hand carry. Sotheby’s shipping will only assist in shipping the lot to either domestic UK or EU destinations, where delivery is made by road transport. A buyer’s inability to export or import these lots cannot justify a delay in payment or sale cancellation.

This previously unpublished octagonal box belongs to a rare group of boxes traditionally ascribed to al-Andalus under the Nasrids (1230–1492) and dated to the fourteenth or fifteenth century. There are good reasons, however, to believe they date earlier and form an important bridge between micro-mosaic work produced under the Umayyad Caliphate (929–1031) and later Nasrid and Morisco ‘geometric incrustation’ known as taracea.

This box belongs to a miscellaneous group of woodwork – including polygonal boxes, rectangular caskets with truncated pyramidal lids, games boards, and even cupboard doors – that have traditionally been assigned to fourteenth- or fifteenth-century al-Andalus. They are connected by their use of a technique known in Spanish as taracea, a word derived from the Arabic tarsi‘, from the verbal root rs‘ meaning to stud or inlay. Taracea is principally an overlay rather than inlay technique using diminutive tesserae to create a ‘geometrical incrustation’. The tesserae were made of different coloured woods, as well as bone or ivory, which might be left its natural colour or stained, usually green and more rarely blue, as in the case of the present box (Rosser-Owen 2010, p.64).

None of the known examples are dated, but a pair of cupboard doors in the Museo de la Alhambra in Granada can be assigned to the early fifteenth century, as they come from the Casa de los Infantes in Granada which was erected by a relative of the Nasrid ruler (Al-Andalus 1992, cat.118, p.373; Granada 1995, pp.379-380, cat. no.143). There are, however, cogent reasons to date this and five other octagonal boxes to the late twelfth or early thirteenth century. Firstly, there is the evident evolution of the boxes in terms of form, decoration and technique. Secondly, there are external comparanda for the taracea work in a sequence of minbars in Morocco that range in date from the mid-twelfth to the mid-fourteenth century. Third, there is the scientific dating of the wooden matrix of the present box.

There are eleven known polygonal boxes, and they divide into three clusters. The latest in date comprises two boxes that are by far the most complex in design and manufacture (London, Victoria & Albert Museum acc.no.270-1895: Rosser-Owen 2010, p.64, fig.55; London private collection, unpublished). Both are ten-sided rather than octagonal as all the other boxes. Their geometrical decoration consists of star polygons with complex infills in a wide variety of colours. The different components are not assiduously assembled by hand but made up from what have been called ‘sliced bundles’. In the case of the box in the V&A thin rods of different woods and bone were glued together into seven differently designed bundles which were then cut into thin slices a mere 1.5m thick. These were then used to overlay the walnut carcass, with intervening elements in the taracea design added singly.

These two boxes can be assigned to the late fourteenth or fifteenth century, in that they share technical and design features with the Casa de los Infantes cupboard doors. Stylistically, technically and chronologically they precede a more heterogeneous group of three boxes. Even earlier are six similarly sized octagonal boxes, including the present lot. Five of this earliest group are closely linked in their use two techniques: geometric incrustation on the top and sides; carved open-work ivory panels on the sides. Marquetry, in which larger pieces of ‘ebony’ and ‘ivory’ are abutted, is also on the base of several of the boxes, as on the present lot. In all likelihood all these boxes originated from the same workshop in al-Andalus:

To these five we can add an octagonal box that uses taracea in place of the openwork ivory panels:

The sequencing seems incontestable. The issue is how much earlier these six boxes are than the fifteenth century. Here the evidence from a sequence of minbars in Morocco is valuable.

The earliest extant example of geometric taracea from al-Andalus is on the minbar now in the Kutubiyya Mosque in Marrakesh (Bloom et al 1998). The minbar’s inscriptions state that it was produced in Cordoba on the orders of the Almoravid sultan ‘Ali b. Yusuf b. Tashufin (r.1106-43), and it can be dated to between 1125 and 1130. Taracea strapwork comparable to that on the minbar of the Kutubiyya mosque occurs on a minbar completed in 538 AH/1144 AD, also constructed on the orders of ‘Ali b. Yusuf b. Tashufin, for the Qarawiyyin mosque in Fez (Carboni in Bloom et al 1998; Paris 2014, cat.101). The Qarawiyyin minbar too might have been produced in Cordoba, though it has been suggested that Andalusi craftsmen were brought to North Africa for the task. The tradition of geometric incrustation persisted in the region for more than two hundred years, and there are at least four surviving minbars across several cities, Marrakesh, Fez and Taza, that incorporate narrow taracea strapwork, with a chequerboard rhomb as the predominant motif.

The minbars provide evidence that Andalusi craftsman produced taracea work in the early twelfth century and exported the technique to Morocco. In Morocco the tradition survived several hundred years, but in al-Andalus we are currently left with an unexplained gap in production between the Kutubiyya minbar and the fourteenth or fifteenth centuries, when these polygonal boxes are traditionally dated. Either production ceased or our dating is faulty. Yet in the 1180s taracea was almost certainly being used to decorate the now destroyed minbar of the Great Mosque in Seville. Only a few years later, between 1185 and 1190, taracea was used to create a strapwork band on the minbar of the Qasba mosque in Marrakesh (Carboni in Bloom et al 1998, pp.58-59; Paris 2014, cat.217), and it displays a strong design resemblance to the border used on an octagonal box in the Metropolitan Museum in New York (acc.no.50.86) that belongs to our intermediate group. The minbar and box do not have to be precisely contemporary for it to be clear that our earliest group of boxes must belong to the twelfth or thirteenth centuries, and thus help fill the present yawning gap in the production of Andalusi taracea work.

Supporting evidence for such a date comes from the radiocarbon C-14 test that was carried out on the wood carcass of the present box. It returned a result between 970 and 1032 AD with 95% confidence. Given that the section of wood used to make the box would not have been taken from the outer tree rings, and might have been taken from nearer the core of an old tree, and given that the wood required seasoning after the tree had been cut, one should allow considerable latitude in dating the box’s construction – from the twelfth to as late as the first half of the thirteenth century. Although dynastic labels may not be of great relevance when it comes to a craft product such as this, the revised dating makes this box and its immediate relatives Almohad or very early Nasrid.

Artefacts from this period of al-Andalus’ history are rare, but what makes this box additionally interesting is that it throws light on the history of a technique often associated with the Iberian peninsula, but which, in its earliest manifestations such as this box, has close connections with woodwork from eighth-century Egypt (Carboni and Hausdorf 2011, cat.21, pp.43-44). From there the technique was taken to the Umayyads of al-Andalus, who used it to decorate one of the most celebrated items of furniture from the medieval Muslim Mediterranean, the minbar produced between 966 and 976 for the Great Mosque of Cordoba.

We are grateful to Julian Raby for cataloguing this lot.