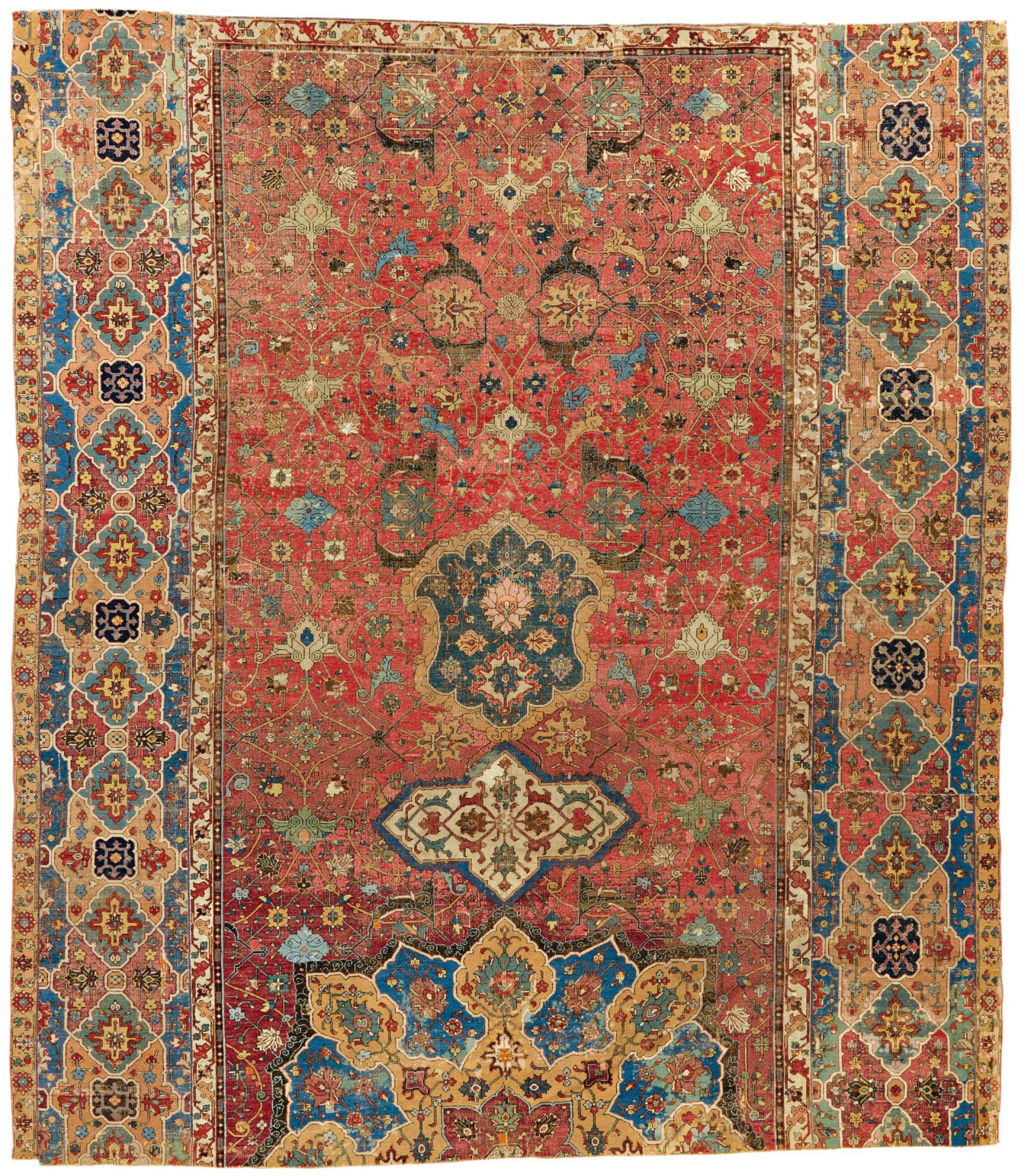 The fragment is from the upper part of the field, (medallion at bottom). Fragmentary and partly pieced: the field and right hand border are integral, whilst the left hand border has been attached along outer edge of inner guard stripe; upper left hand corner of left hand border pieced together (approx. 10 pieces); 3/4 of upper guard at upper edge reinserted; upper right hand portion integral. Pile is generally evenly low to knot heads and spot foundation; blues have survived best, extensive oxidisation to crimson field with quite a lot of later repiling, visible as strawberry pink. Scattered spot repiling in medallion, possibly old insect damage, now visible particularly as the bright turquoise blue areas in the cobalt blue lobes. Repaired split across right hand border, multiple small scattered areas of repiling and cobbling throughout. Colour remains quite fresh. Carpet might benefit from a clean, but still reads very clearly.

Please note that this is a rug of Iranian Origin, and due to recent changes in the U.S. law, carpets and rugs of Iranian/Persian origin can no longer be imported into the U.S.

A splendid fragment displaying almost half of a Safavid star medallion, cartouche and pendant carpet. This layout and various border types can be seen in examples such as the two carpets once in the collection of Charles Tyson Yerkes, the 16th century Safavid star medallion carpet, in the Metropolitan Museum of Art, New York, Inv.no. 64.311 and the Safavid lobed-medallion carpet, Tabriz, Northwest Persia, 16th century. Metropolitan Museum of Art, New York, no. 41.100.113; that in the Textile Museum, Washington D.C., no.1960.9.1., and the carpet illustrated on Arthur Upham Pope’s catalogue for Art Club of Chicago exhibition, January 1926, No.2. An image of this lot from his files was used by Jon Thompson in Milestones, op.cit., to illustrate his discussion of another well-known Safavid medallion carpet, the Parish Watson carpet, illustrated as Plate 16 in the same publication, with particular reference to the way the decoration of the field in this and the Parish Watson example continues beneath the medallion and pendants, a characteristic Thompson posits is associated with earlier examples of the genre. The dating of Safavid medallion carpets is broadly hinged from the three period carpets with dates, the two Ardebil carpets, dated 1539-4, and the Poldi-Pezzoli carpet, dated 1542-43. As Thompson notes, ibid., p.183, “There are medallions of ‘cloud collar’ form, more or less circular medallions with sixteen gently rounded lobes, medallions with and without pendants, and medallions with angular and pointed lobes such as [the Parish Watson] example”. The present lot has a medallion with sixteen lobes, which can either be read as a pale gold eight-pointed star overlaying an eight (or 16) pointed blue medallion, or a gold medallion supporting eight waisted cartouches similar to the pendants. The entire medallion is framed by a ‘cloud collar’, as are the pendant motifs. A similar medallion can be seen in the example in the Textile Museum, cited above, although the drawing in that is more angular and the medallion more squared-off than is seen in the present lot. A similar central medallion but without the pendants is seen in the Topkapi Harem Medallion and Cartouche carpet (illustrated for example in Hali 31, July-September 1986, p. 13). Both the inner and outer guard stripes of the present lot are also to be found in the Topkapi carpet, whilst the border is found in the Yerkes/(Bardini/Seligmann/Blumenthal) carpet in the Metropolitan, no. 41.100.113, cited above and illustrated in Hali 201, Autumn 2019, p. 43.

Please note that due to recent changes in the U.S. law, carpets and rugs of Iranian/Persian origin can no longer be imported into the U.S