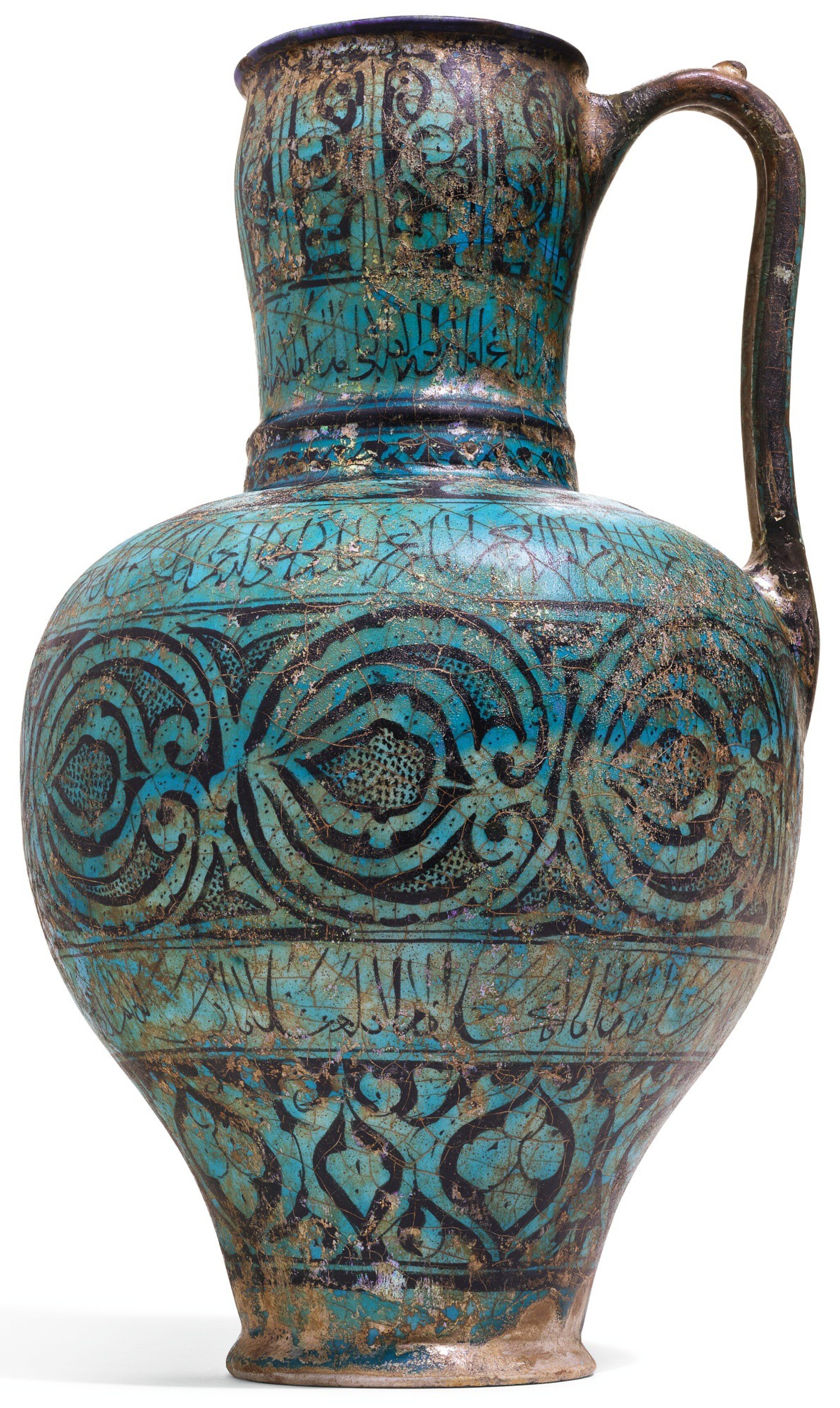 the fritware body painted in black under a turquoise glaze, with three calligraphic rows, the neck with vegetal bands, a row of stylised birds to shoulder, body with palmettes surrounded by multiple outlines, foliate motifs near base, linear handle

The present pitcher evidences the dramatic innovations in ceramic decoration which were firmly established in Persia by the end of the twelfth century (Watson 2004). These new techniques emerged as ceramics began being made with white frit mass rather than red clay. This gave potters a white ground to paint directly with black slip before coating with a variety of coloured glazes such as the present turquoise.

This pitcher’s complex design illustrates the decorative freedom of the technique. The black slip used to produce such patterns was not prone to running during the firing process and thus potters of the period increasingly employed distinguished lines and motifs. The layered design wraps lengthways around the pitcher and integrates intricate palmette medallions with cursive inscriptions.

In the early 1940s the discovery of many similar vessels that had been buried in large pottery oil-jars in Gurgan, pointedly advanced the understanding of ceramics from this period. "Found stockpiled in large storage jars, these vessels consisted of monochrome, unglazed and luster-painted ceramics datable, stylistically and by inscribed dates, to the late twelfth and early thirteenth centuries. ...It has since been proposed that the vessels contained in the jars could have been the supply of a merchant who had imported them presumably from Kashan and had hidden them for safekeeping on the eve of the Mongol invasions...(Pancaroglu 2007, p.124)".

The provenance of the present work further heightens its importance: Jacques Matossian was a collector living in Alexandria in the early twentieth century known for his extensive collection of Coptic textiles and Islamic art, much of which is now housed in museums worldwide from bequests made between 1949-59. Edwin Binney III, who was heir to the Crayola fortune, is best known for his extensive collection of miniature paintings, now in the San Diego Museum of Art.