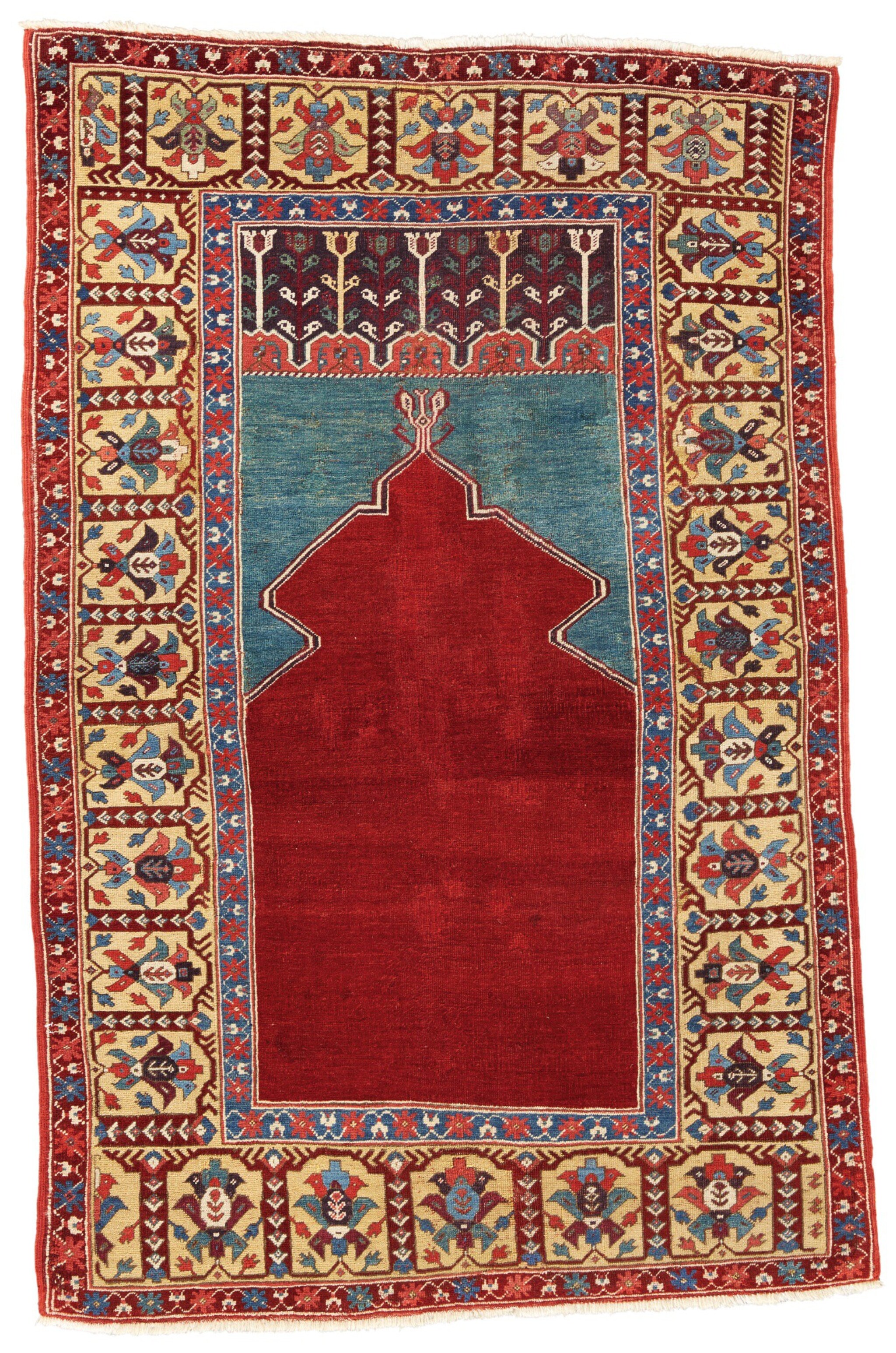 Condition 9 of the Conditions of Business for Buyers for this sale is not applicable to this lot.

Pile overall good, 2mm in depth variable to fair, with knotheads appearing. Old holes in the centre of the field are rewoven/repiled. These are well executed and are more visible in the illustration online than they are in the flesh. There are also restorations and reweaves to the outer edges of the guard stripes, and then some minor localised spot repiling. The ends have cotton tape on the reverse to secure. Glorious colour. Additional images are available from the department.

Whilst at first glance this appears to be an archetypal Ladik prayer rug, with its row of upstanding tulips, this is one of only three niche rugs known with this yellow ground border of palmettes within cusped arcading, two have an open niche and spandrels, the present example and the rug from the collection of the late US Ambassador Burton Yost Berry (1901-1985), sold Sotheby’s New York, 31 January, 2014, lot 24 (for $31,250), and the third, with decorated spandrels and a stepped niche, in which the border is less elegantly drawn and which more closely resembles the familiar later Ladik production is illustrated in Spuhler, König and Volkmann, Alte Orientteppiche, Munich, 1978, pl.19. This border probably developed from the ‘Gothic’ border of earlier Oushak production, see Brüggemann, Werner and Böhmer, H., Rugs of the Peasants and Nomads of Anatolia, Munich, 1983, pl. 129. It is found more frequently on Anatolian red-ground rugs with large palmettes, for example that illustrated in Hali 5/2, 1982, p. 176. Further examples can be seen on John Taylor’s blog of 21 October 2019 on rugtracker. For further discussion of the various designs of the more ubiquitous Ladik rugs, see Bailey, Julia, “Ladik prayer rugs” Hali 28, October-December 1985, pp. 18-25). Herrmann comments about this particular rug “Possibly made in the Ladik area it is quite different in contrast to the traditional niche group carpets coming into production in the late 18th C. The clarity of colours in red, green and yellow is rather striking. Colour interpretation refers to cosmic levels of the sun (red),to the conjunction of moon and the stars (green), and the stars (yellow). The outline of the niche is constructed by changing angular lines relating to the conjunction of the moon with the stars, metaphysically known as the Golden door of the ecliptic through which ecliptic and the planets are moving (see graphic and angular measure table below).”