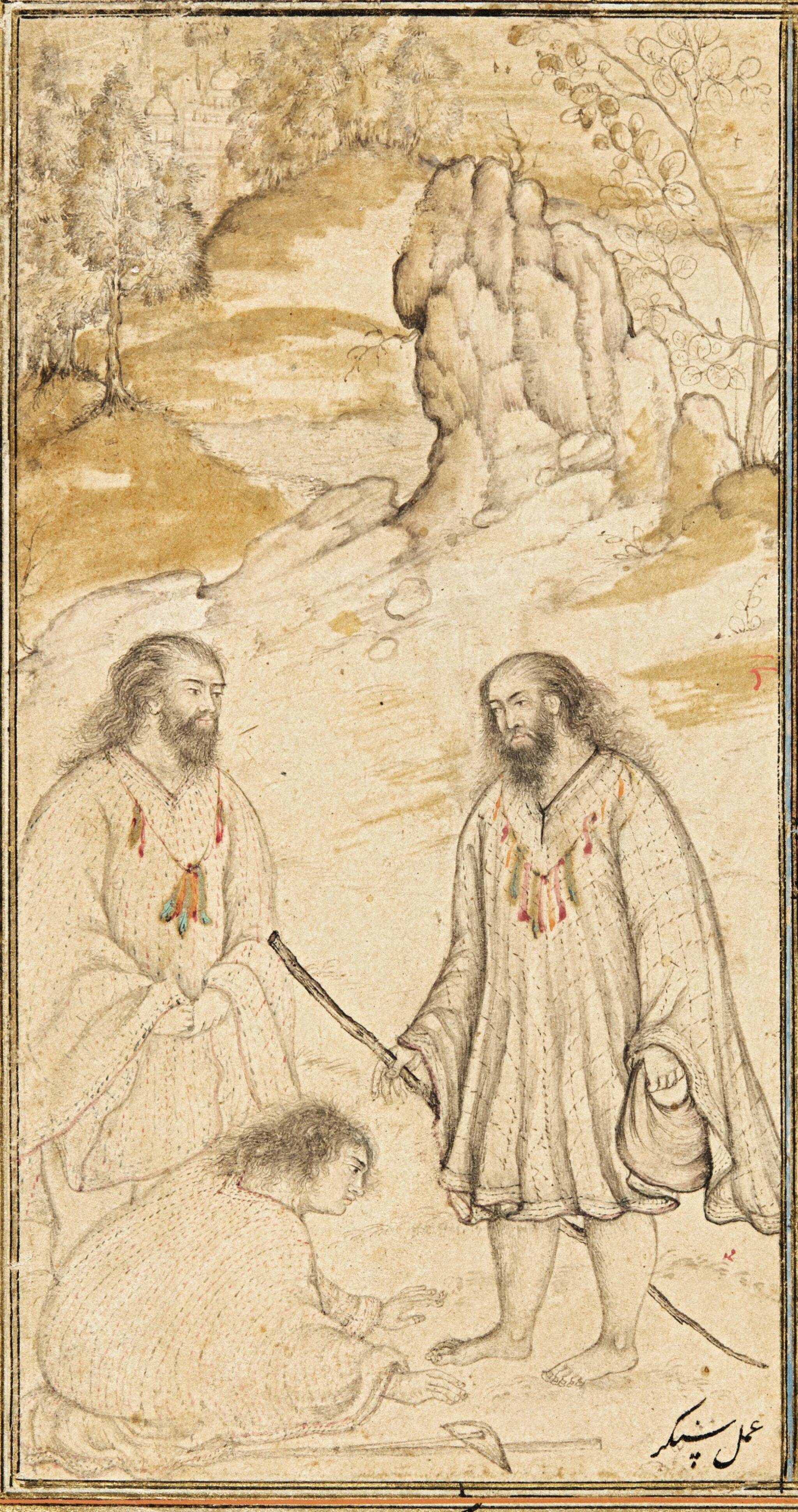 A section from an Royal Mughal Album

29 leaves in two volumes (19 and 10 folios respectively), each page with single or multiple panels of large and small nasta'liq calligraphy written horizontally, diagonally and vertically in black ink (one instance of white ink) on cream, buff, brown, blue, grey and pink paper, many decorated with gold foliate motifs or birds, many panels of marbled paper, three panels with dates of 974/1566, 998/1589-90, 999/1590-91 and 1002/1593 respectively, one page with a drawing of dervishes ascribed to Shankar, borders of stout cream, blue, pink and buff paper finely decorated in gold with birds and animals amidst foliage, scrolling foliate motifs, cartouches, cloud collars and geometric designs, several pages with catchwords, most folios with Persian numbers in margins in pencil and some in red ink, one frontispiece page fully illuminated in colours and gold, later red leather bindings

Generally in good condition. Some minor stains. Paper repairs to edges and corners in places. As viewed.

These folios are from a magnificent, large royal Mughal album produced in the last years of Emperor Akbar's reign, about 1600. It is known from three large sections and a small number of dispersed single folios.

The album as a whole is dominated by works of calligraphy, written entirely in nasta'liq script of varying sizes, from the minute to the very large. The great majority are signed by the royal calligrapher Muhammad Husain Kashmiri, known as Zarin Qalam (Golden Pen), considered by Akbar to be the greatest master of the period. In the Ain-i Akbari Abu'l Fazl describes him thus:

"The artist who, in the shadow of the throne of His Majesty, has become a master of calligraphy is Muhammad Husain of Kashmir. He has been honoured with the title Zarrinqalam, the gold pen. He surpassed his master maulana Abdul-Aziz...., art critics consider him equal to Mulla Mir Ali" (Ain-i Akbari, vol.1, pp.102-3).

The album as a whole also included a significant number of drawings by royal artists including Basawan, Daswanth, Dhanraj, Kesu, La'l, Bhagwati and Shankar. These are mostly in the group of folios at Windsor, but one is present here and others are among the dispersed leaves. Some are full-page drawings and others are on smaller panels alongside calligraphies. The drawing in the present group of leaves is a study of three dervishes in a landscape, ascribed to Shankar, and is placed sideways on a page with two panels of calligraphy. The artist Shankar was a member of the royal atelier during the second half of Akbar's reign and perhaps the early years of Jahangir's. His career began around 1582 and he contributed to many of the great royal manuscripts of the 1580s and 1590s, including the Timurnama, Darabnama, Razmnama, Ramayana, two manuscripts of the Baburnama, the first and second Akbarnama manuscripts, and the Iyar-i Danish. For further information on Shankar see Verma 1994, pp.348-352; Leach 1995, vol.II, p.1117.

The present leaves and the album as a whole are notable for the variety, complexity and quality of the design and decoration of the pages, both in terms of the exquisite gold-decorated borders and the arrangement and decoration of the calligraphic panels. The panels on which the calligraphies are written consist of cream, buff, brown, blue, grey and pink paper. Some of the papers are plain, but many have been decorated prior to the writing of the calligraphy with gold foliage or scrolling motifs (i.e. the gold decoration is underneath the script). Most of these are freehand drawings, but some appear to be stencilled. A few have small gold birds painted among the lines of calligraphy (probably painted after the script), and there is widespread use of gold sprinkling and gold flecking. A particularly notable feature is the extensive use of marbled papers for the calligraphic panels. Even within the marbled papers there is a great variety of techniques and designs.

The borders also feature a variety of coloured papers, including cream, blue, salmon-pink, and buff. Some of these are plain, but the majority are painted in gold with one of five types of decoration: animals and birds amidst foliage and rocky outcrops; dense stylised foliage devoid of animals or birds; scrolling foliate motifs; lobed cartouches; small geometric designs with cloud rosettes. In general these designs show the background influence of Persian and Central Asian manuscript traditions of the sixteenth century, which had been absorbed into the Mughal repertoire during Akbar's reign (see Wright 2008, pp.46-53). More pertinently, all of the designs present on these leaves, both in terms of specific design elements and their variety, appear in royal Mughal manuscripts of the 1590s. The closest comparisons are to be found in the Baharistan of Jami of 1595 (Oxford, Bodleian Library, MS. Elliott 254, see Topsfield 2008); the Khamsa of Nizami of 1595 (British Library, Or.12088, see Brend 1995); and the Diwan of Hafiz of circa 1600-05 (Dublin, Chester Beatty Library, Per.150, see Wright 2008, pp.230-1), although the present borders lack the human figures that feature in the Oxford, London and Dublin manuscripts.

The group of twenty-three folios in Windsor entered the Royal Collection before 1728 as loose leaves (Hannam 2018, p.64), indicating that the album was dispersed by that date. The disjointed sequence of folios in the three substantial groups of leaves further indicates that the original album was disbound, dispersed and rebound in different groupings early in its history, a factor confirmed by the different positions, hands and inks of the numbering in the margins across the various groups of leaves. It is also interesting to note that the borders of the folios in the Royal Collection are in many cases in poorer condition that those of the folios that have appeared on the market, with staining, worming and some surface abrasions. This implies that the group of leaves in Windsor had a different biography in the period prior to 1728 from sections that have appeared at auction.

We are indebted to Marcus Fraser for cataloguing this lot.