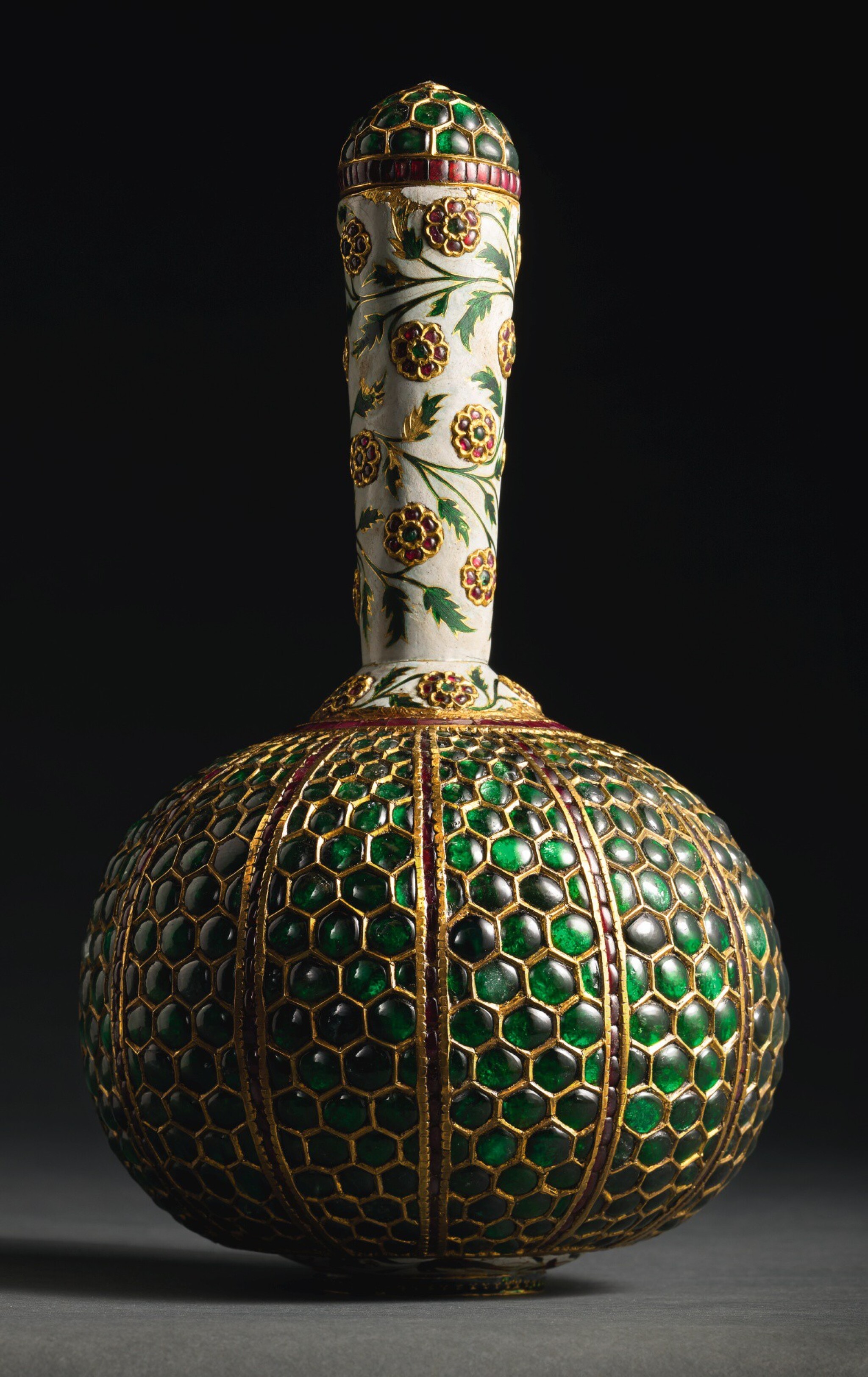 the spherical gold body set with foil-backed emeralds in hexagonal settings, between thin dividing bands set with rubies, the neck with a white enamel ground, decorated with green leafy stems and slightly protruding gem-set flowerheads, detachable lid matching body, surmounted by a diamond, the underside finely enamelled with birds and flowers on a white ground

Overall in good condition, gems not tested (due to settings) but appear to be consistent with emeralds, rubies and a diamond, some of the gems with minor abrasions consistent with age, very few gems appear to have been replaced with a paste, enameling at the base of the gem settings to render a more uniform overall colour to the the stones, the white enamel to neck with some slight abrasion along edges and associated craquelure, enamelling to underside also with thin hairline cracks, as viewed.

Ex-collection Nizam of Hyderabad, gifted to the family of the current owners, 1930s, thence by descent.

Set with over six-hundred emeralds, this flask (surahi) is striking for its exuberant use of gemstones offset by the white-ground enamelling, and related closely to the booty seized by Nader Shah from the Mughal treasury in 1739.

During the seventeenth century, precious objects were often set with gemstones in the manner seen here, as recorded by the traveller Jean de Thevenot who describes gold and gem inlaying at Agra (see India in the Seventeenth century, vol.II, ‘The Voyages of Thevenot and Careri’, ed. J.P. Guha, New Delhi, 1979). The kundan technique employed for the settings is unique to India. Using hyper-purified gold (kundan), the inlayer (zar-nishan) refines the soft metal into strips of malleable foil which at room temperature have an adhesive quality. Once cut and folded, the craftsman can apply the ductile gold as he chooses without any need for solder or glue. In spite of the practical advantages of this technique, it was only ever used in the Subcontinent, though widely imitated elsewhere (Keene 2001, pp.18 and 30). This was an effect best described in the seventeenth century by Sir Thomas Roe, then ambassador to the court at Agra, who exclaimed upon seeing the Emperor Jahangir on the occasion of his forty-seventh birthday: “In jewells hee is the treasury of the world” (Foster 1926, pp.378-9).

The form of this piece and similar models depicted on contemporary miniatures suggest that it would originally have been used to pour wine. The enamelled design on the underside would have become apparent as the vessel was tilted to pour.

The form and design of this vessel finds analogous models in the group of jewelled objects which were looted from the Mughal Imperial treasury by Nader Shah in 1739 and sent to the Russian Court, many of which are today in the State Hermitage Museum, St. Petersburg. The vast wealth accumulated and lost by the Mughals following this plunder is described by Nader’s court historian, Mirza Mahdi Astarabadi: “Within a very few days, the officials entrusted with sequestration of the royal treasuries and workshops finished their appointed tasks", he wrote, ‘There appeared oceans of pearls & coral, and mines full of gems, gold and silver vessels, cups and other items encrusted with precious jewels and other luxurious objects in such vast quantities that accountants and scribes even in their wildest dreams would be unable to encompass them in their accounts and records” (see Dalrymple 2019, p.43).

Among the objects presented to Empress Elisabeth of Russia by the embassy from Nader Shah in 1741 that are now in St. Petersburg, this flask most closely resembles a piece of similar form measuring 26.2cm high, set entirely with emeralds arranged in hexagonal settings with vertical dividing bands containing rubies, (inv. no.V3-702, Zebrowski 1989, p.67, no.46). Another flask, also from the same group (inv. no.V3-715), is of the same shape and covered entirely with gem-set flowers, measuring 25.7cm. An interesting feature of this flask is that it combines both a gem-set decoration on its body, and a design of gemstones-set against an enamelled ground on its neck, and less visible, on the underside. Analogous to this design on the neck is a tray for an octagonal box, also in St. Petersburg (inv. no.VZ 724), described as “one of the masterpieces of the collection of Indian goldsmith’s work” (Piotrovsky, Rogers, Ivanov 2004, p.174, no.123).

In terms of form, the present flask can also be compared to the 'Clive Flask', another survival from the Mughal court also inlaid with rubies and emeralds, but in jade rather than gold (Christie's London, 27 April 2004, lot 156). This present piece, alongside the two flasks in the Hermitage as well as the Clive example, may all once have stemmed from the same workshop, although it is less clear how they left the Mughal Treasury. In discussing the Clive Flask, it has been suggested that it may have been a gift from the emperor to a prince at an earlier date (there are various such instances of jewelled items being donated from the Treasury). Another likely option however is that it was among the pieces taken by Nader Shah, but which, among others, never made it all the way back to Iran.

A related gold flask dated to the eighteenth century, with gem-set enamelled neck, is in the Nasser D. Khalili Collection, inv. no.JLY 1803.