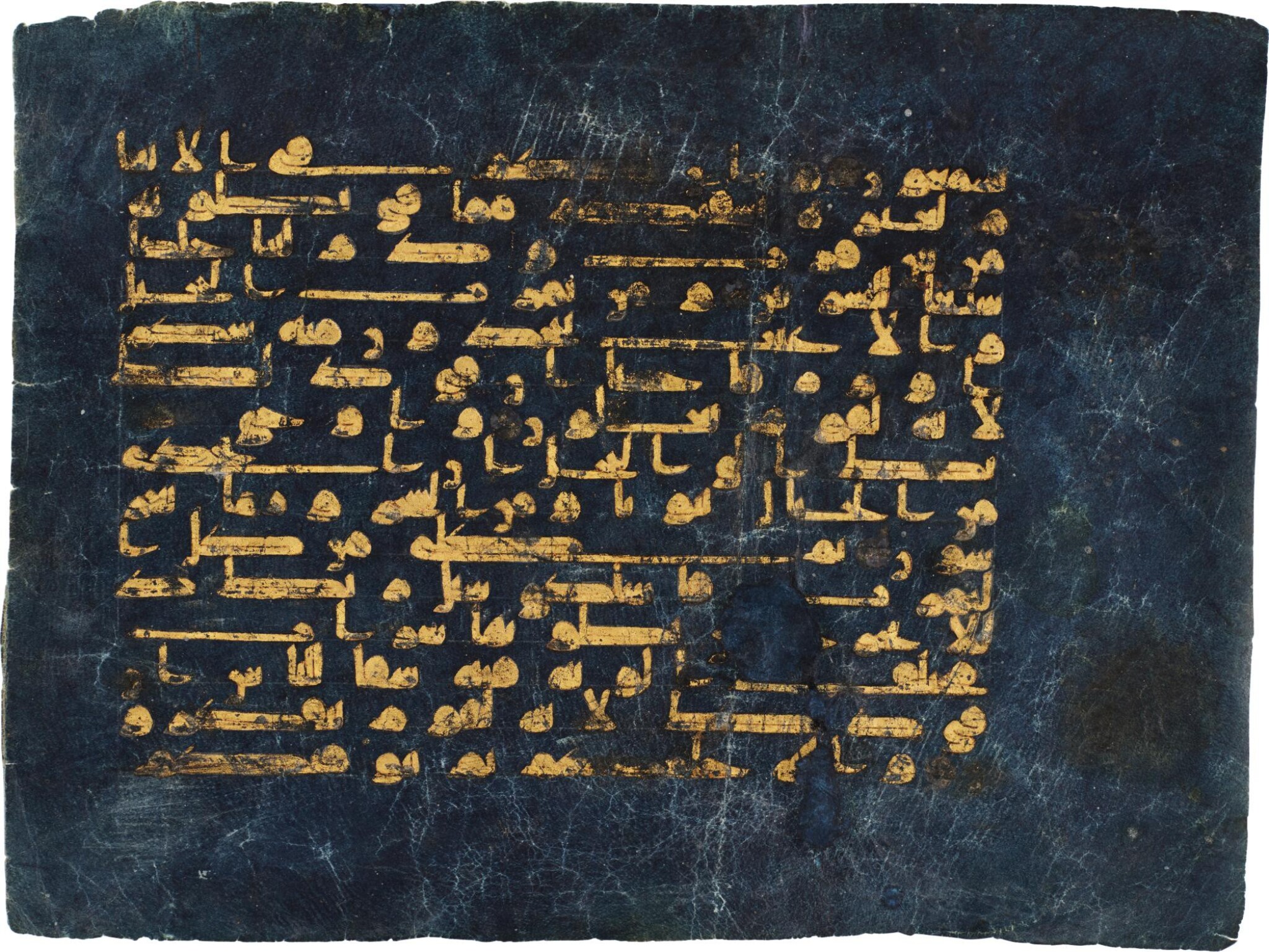 This leaf is from an exceptional manuscript commonly known as the 'Blue Qur'an'. When complete it must have been one of the grandest manuscripts ever produced in the early medieval period in the Islamic world. It is universally agreed that it is a startlingly luxurious example of early Islamic manuscript production, whose patron must have been a ruler of great wealth and ambition, and that it was one of the most important manuscripts of the Qur'an produced in the medieval Arab world.

The exact origins of the Blue Qur'an have not been firmly established, but several theories have been put forward over the last century. F.R. Martin, who acquired a group of leaves in Istanbul in 1912, suggested that the manuscript was commissioned by the Abbasid Caliph al-Ma'mun for the tomb of his father Harun al-Rashid, and that the dark blue colour of the vellum was a symbol of mourning. In 1956 Chabbouh published the 1294 inventory of the Great Mosque at Qairawan, which mentioned a Qur'an written in gold on blue parchment. Jonathan Bloom has argued that a North African Fatimid provenance is the most likely (J.M. Bloom, 'Al-Ma'mun's Blue Koran?', Revue des études islamiques, LIV, 1986, pp.59-65; and 'The Blue Koran. An Early Fatimid Kufic manuscript from the Maghrib', Les manuscrits du Moyen-Orient, Varia Turcica, VIII, Istanbul and Paris, 1989, pp.95-99; J. Bloom, Art of the City Victorious, Cairo and New Haven, 2008, pp.42-44), and M. Fraser suggested a possible Aghlabid or Kalbid origin (Fraser and W. Kwiatkowski, Ink and Gold. Islamic Calligraphy, London-Berlin, 2006, no.46). Alain George has attributed the manuscript to early Abbasid Baghdad in the late eight or early ninth century (A. George, 'Calligraphy, Colour and Light in the Blue Qur'an', in Journal of Qur'anic Studies, Volume XI, Issue 1, 2009, pp.75-125). Tim Stanley has suggested an Andalusian origin ('The Qur'an on Blue Vellum. Africa or Spain?', The Qur'an and Calligraphy, A Selection of Fine Manuscript Material., Quaritch, London, 1996, pp.7-15), a theory given a more secure and detailed basis in a recent study by Marcus Fraser which points to an origin in Cordoba during the caliphate of al-Hakam II (M. Fraser, 'The Origins and Modifications of the Blue Qur'an', in Manuscripts in the Making: Art & Science I ed. S. Panayotova and P. Ricciardi, Turnhout, 2017, pp.198-213).

A section of the manuscript is in the National Institute of Art and Archaeology in Tunis, and many detached leaves or fragments are in the museums and collections in the Middle East, Europe and North America, including the Chester Beatty Library, Dublin, the Museum of Fine Arts, Boston, Harvard University Art Museums, Cambridge Massachusetts, the Metropolitan Museum of Art, New York, the Aga Khan Museum Collection, Toronto, and the Nasser D. Khalili Collection, London. Several leaves have been offered and sold in these rooms, most recently, 23 October 2019, lot 107; 22 April 2015, lot 62; 4 October 2011, lot 2; 5 October 2010, lot 7; 11 October 2006, lot 3, and in the sale of the Collection of the Berkeley Trust, 12 October 2004, lot 1.