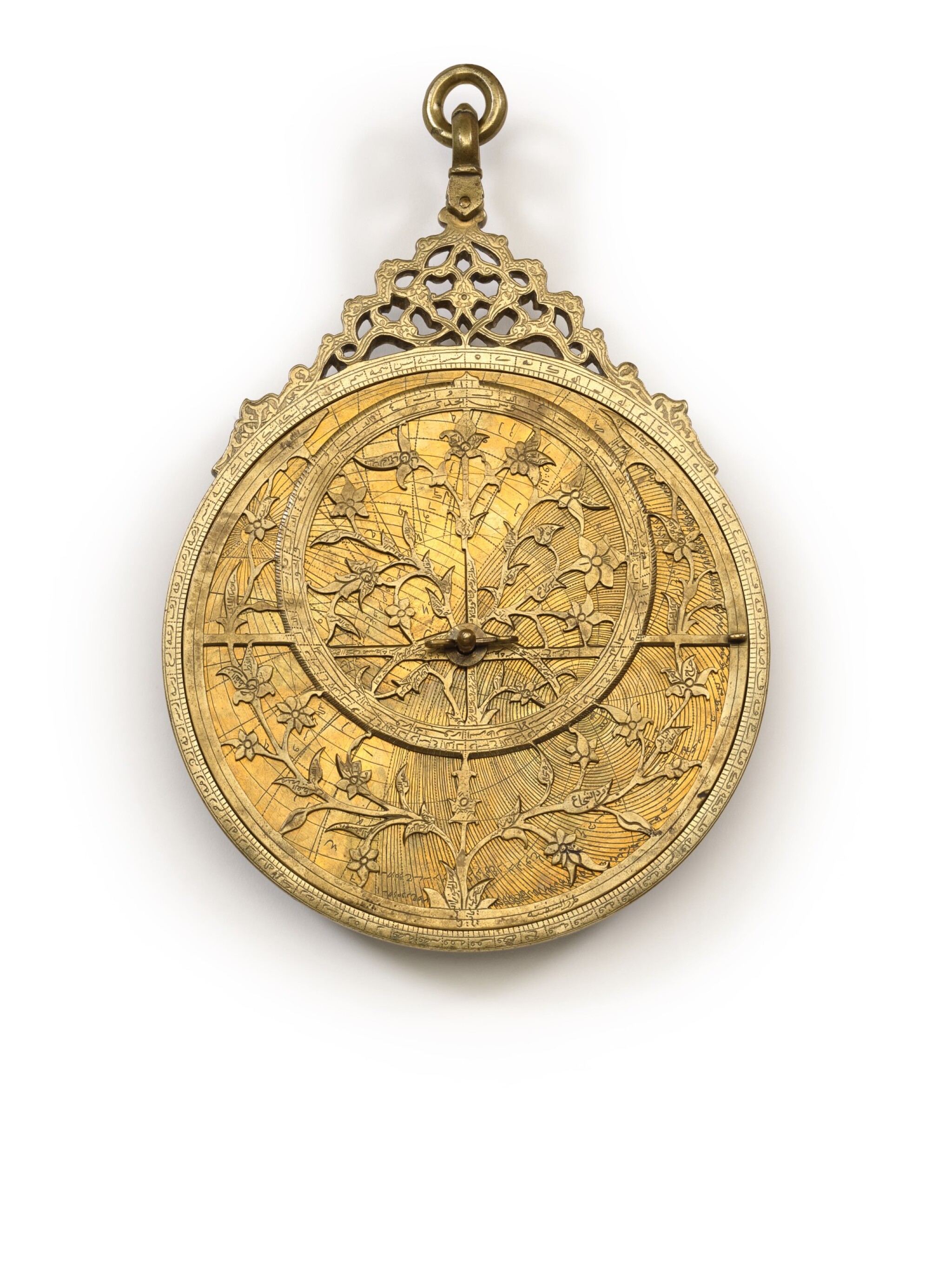 mater and throne created from a single piece of brass, the throne pierced with foliate arabesques, mater engraved on inner surface, listing longitudes and latitudes of 150 named cities, dorsum with signature of maker and date, rete with star-pointers in forms of a leaf or flower, containing five plates engraved on both sides, original alidade, pin, horse and washer

In good overall condition, some slight oxidisation, notably to plates with associated discoloration, the reverse of the astrolabe with minor sections with abrasion to surface, it is unusual to have original alidade, pin, horse and washer, as viewed.

S. al-Khemir, Beauty and Belief. Crossing Bridges with the Arts of Islamic Culture,

This astrolabe is one of the finest and most complicated such instruments in existence. It was made by the celebrated astrolabist and instrument maker Diya al-Din ibn Muhammad Qa’im ibn ‘Isa Ilah-Dad in Lahore. It is signed and dated 1068 AH (1657 AD).

Diya al-Din was a fourth generation member of the most distinguished family of Mughal instrument makers. This ‘workshop’ was founded in the mid-sixteenth century by his great grandfather Ilah-Dad, the Court Astronomer to the Emperor Humayun. His grandfather, father and uncle, as well as his two cousins all continued in this family business until the end of the seventeenth century.

A beautiful and remarkable instrument, it is among the most complex known from among the Lahore School in terms of the geographical, astronomical, trigonometric and mathematical information shown on it.

The mater and the throne are made from a single piece of brass. The throne at the top of the instrument is pierced à jour and beautifully decorated with floral and vegetal arabesques. The mater is elaborately engraved on its inner surface with a geographic gazetteer listing both the longitudes and latitudes of some 150 named cities, arranged within concentric circles according to the seven geographical ‘climates’ of antiquity. A few examples are: Mecca, Medina, Aden, Baghdad, Isfahan, Lahore, Delhi, Kashmir, Balkh, Samarkand, Jarmi in Ethiopia, and Peking.

The dorsum bears the standard markings for a Lahore astrolabe including two quadrants, a shadow-square and scales for both equal and unequal hours. The inscription on the back states "the work of the most humble of servants Diya al-Din Muhammad ibn Qa-im ibn Muhammad ibn mulla ‘Isa ibn Shaykh Illah-Dad Asturlabi Humayuni Lahori in the year 1068’’. It gives the maker’s full name, along with the names of his father, grandfather and great-grandfather, the founder of this ‘dynasty’ of astrolabists, with his titles as ‘Astronomer Royal’ and ‘Fabricator of Scientific Instruments’ at the Court of the Mughal Emperor Humayun.

The rete is highly decorative with each star-pointer in the form of a leaf or flower, echoing the decoration on the ‘throne’. There are pointers for the quite exceptionally large number of 74 named stars. This rete has two most unusual features. This first is the small circular arc below its centre. This indicates the horizon for one specific

latitude. It can only be used with the special markings on one single plate. This type of horizon is called Zawraqi in medieval scientific Arabic, meaning 'shaped like a ship'. This feature is consequently sometimes referred to as a ‘ship-horizon’. It is shown on the rete as an arc straddling the equinoctial bar. As is obvious, its curved arc resembles the hull of a boat with the vertical meridien resembling the upright mast.

The Zawraqi astrolabe was invented and introduced late tenth or early eleventh century by Abu Said al-Sijzi, (c.945–c.1020 AD) the noted Iranian Muslim astronomer and mathematician. This is recorded by his contemporary al-Biruni with whom he had a substansial correspondence. Al-Biruni also informs us that al-Sijzi proposed that the earth rotates around its axis. In his kitaab fi istiab al-wujduh fi san’at al-astrolab, Al-Biruni describes several non-standard astrolabes including “of very special interest is the boatshaped astrolabe of Abu Said al-Sijzi, which, in its construction abandons the geocentric model that was generally accepted insofar as the horizon he designed is moveable. The moveable part is an arc which can be cut out from a metal plate that can be rotated through which the astrolabe passes. The convex edge of the arc is the projection of the horizon of the locality for which the plate is calibrated. Firmly attached to the arc is a ruler with a pointed end, attached in such a way that when the arc coincides with the horizon line drawn on the plate, the ruler rests on the meridien line. The main advantage of this astrolabe is the simple shape of the moveable part.

However, the use is much more complicated.”

Astrolabes with such ‘ships’ are extremely rare. This ‘moveable horizon’ can be rotated over a fixed ecliptic on a special particular plate below, allowing the operations of the astrolabe relating to horizons to be performed in reverse. Though invented centuries earlier, the only surviving examples of such astrolabes all come from the Lahore School of Astrolabists, thus from the late sixteenth and early seventeenth centuries. Diya al-Din’s father, Muhammad Qa’im incorporated such an arc on astrolabe he made in 1635. This had to be used with a special projection engraved on one of the plates. This ‘complicated plate’ is engraved in the centre with a ‘miniature tablet’ for latitude 42°, 15 hrs. Below this is engraved “a tablet for the projection of rays.” These are referred to by al-Biruni as also being called “equalisation of houses.” Another unsigned astrolabe attributed to Muhammad Qa’im also shows this feature however this instrument is missing its plates. Two astrolabes by Diya al-Din – this one and another now in the Palace Museum in Jaipur – carry these Zawraqi horizons, as do five other instruments attributed to him. Finally, one other Lahore School astrolabe, by his cousin Jamal al-Din, also includes this rare and unusual feature. Interestingly the Jaipur astrolabe is also dated 1068 AH (1657 AD) thus was made in the same year.

The instrument described here has five plates. Four of these are for eight different latitudes. These plates are engraved on both sides with altitude circles for each 2° and azimuth circles for each 6°, with markings for the seasonal hours before and after sunset. The remaining plate, which is intended for use with the Zawraqi ‘ship’ on the rete, has on one side an additional set of markings inside those for latitude 35°, set for 32°, which is specifically for Lahore. With this plate only, the ‘ship’ can be used to determine the length of daylight throughout the year, and the period during which stars are visible above the horizon.

The other side of this remarkable plate is engraved as a star-map, showing the positions of 23 stars. This is also unique, with no other similar information given on any other known astrolabe plate. This highly unusual plate can be fixed within the mater in either of two opposing positions, allowing the astrolabe to be used without the rete. This ‘function’ is known on only one other astrolabe, an instrument made in the fourteenth century by ‘Umar al-Kirmani in Iran. It is now in the Museum of Islamic Art in Doha. We must assume therefore that Diya al-Din was either familiar with the ‘Umar astrolabe, or more probably, with a manuscript in which this remarkable

celestial map is explained and illustrated. On this astrolabe, the alidade or sighting vane, which is original, is pierced with twin sets of sightholes. The pin, horse and washer are also all original.