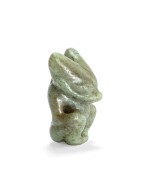 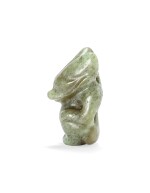 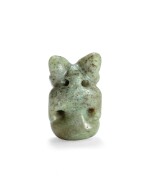 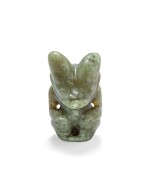 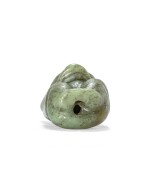 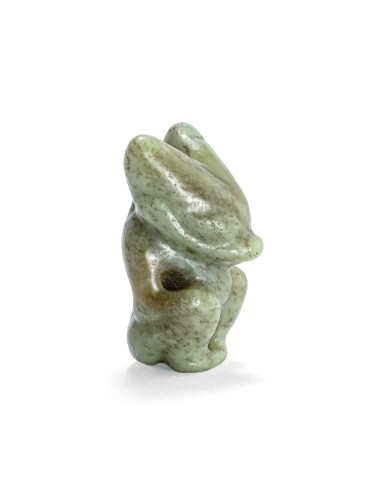 One of the seemingly miraculous achievements of early man in China is the working of jade into ritual and decorative implements and figurines in the Neolithic, long before metal could be worked. Among the various cultures that fashioned jade in different regions, Hongshan, in the northeastern regions of Inner Mongolia, Liaoning and Hebei, with the type site discovered in the 1980s in western Liaoning, appears to have been the earliest.

The Hongshan culture flourished from about 3500 to 2000 BC and besides a sophisticated temple site has brought about many figurative jades, in the form of birds and dragon-like creatures, pierced with holes for suspension and carved in a smoothly finished style that makes them pleasant to handle. Among the best-known finds are the so-called pig-dragons, ring-shaped carvings with pig-like snouts and ear-like projections on top of the head.

On account of basic similarities to these excavated finds, some pieces that have long been in Western collections have now also been attributed to the Hongshan culture, among them three jade figures of seated humanoid beings: one from the Severance A. Millikin collection that entered the Cleveland Museum of Art in 1953; one from the collection of Louis C.G. Clarke, since 1960 in the Fitzwilliam Museum, Cambridge; and a third from the collection of Ernest Erickson, at least since the 1960s in the Museum of Far Eastern Antiquities, Stockholm. No such figures have to date been discovered at Hongshan sites, but the fact that these jades entered Western Museums long before the Hongshan culture became known, speaks for their authenticity.

The three figures have been discussed together with two other collected pieces in Angus Forsyth, ‘Five Jade Figures. A Study of the Development of Sculptural Form in Hongshan Neolithic Jade Working’, Orientations, vol. 21, no. 5, May 1990, pp. 54-63 (reprinted in Chinese Jade. Selected Articles from Orientations 1983-2003, Hong Kong, 2005, pp. 77-86); an additional figure in the Palace Museum, Beijing, has been published together with the Fitzwilliam and Stockholm examples in James C.S. Lin, The Immortal Stone. Chinese Jades from the Neolithic Period to the Twentieth Century, Cambridge, 2009, pp. 14-16; another from the Chan-chi-hsüan Collection has been included in the Collectors’ Exhibition of Archaic Chinese Jades, National Palace Museum, Taipei, 1995, cat. no. 7.

These seven figures are all depicted seated, with legs pendent, five of them with hands resting on knees, and all have horizontally pierced holes at the back of the neck. The shape of the heads and depiction of features vary. The present figure shows close association to the above figures, although it appears to be seated on the ground. The head, with its pointed snout differs again from the other examples, the bisected top of the head is somewhat reminiscent of the shape of the pointed ears of pig-dragons. The carving of the present figure seems rather more softly rounded than on known Hongshan figures. That the figure is pierced underneath with a modern hole for attachment, which is distinctly different from the holes for suspension pierced at its back, would seem a positive feature to support its age. What makes definite attribution difficult is the severe limitation of extant examples of such carvings.