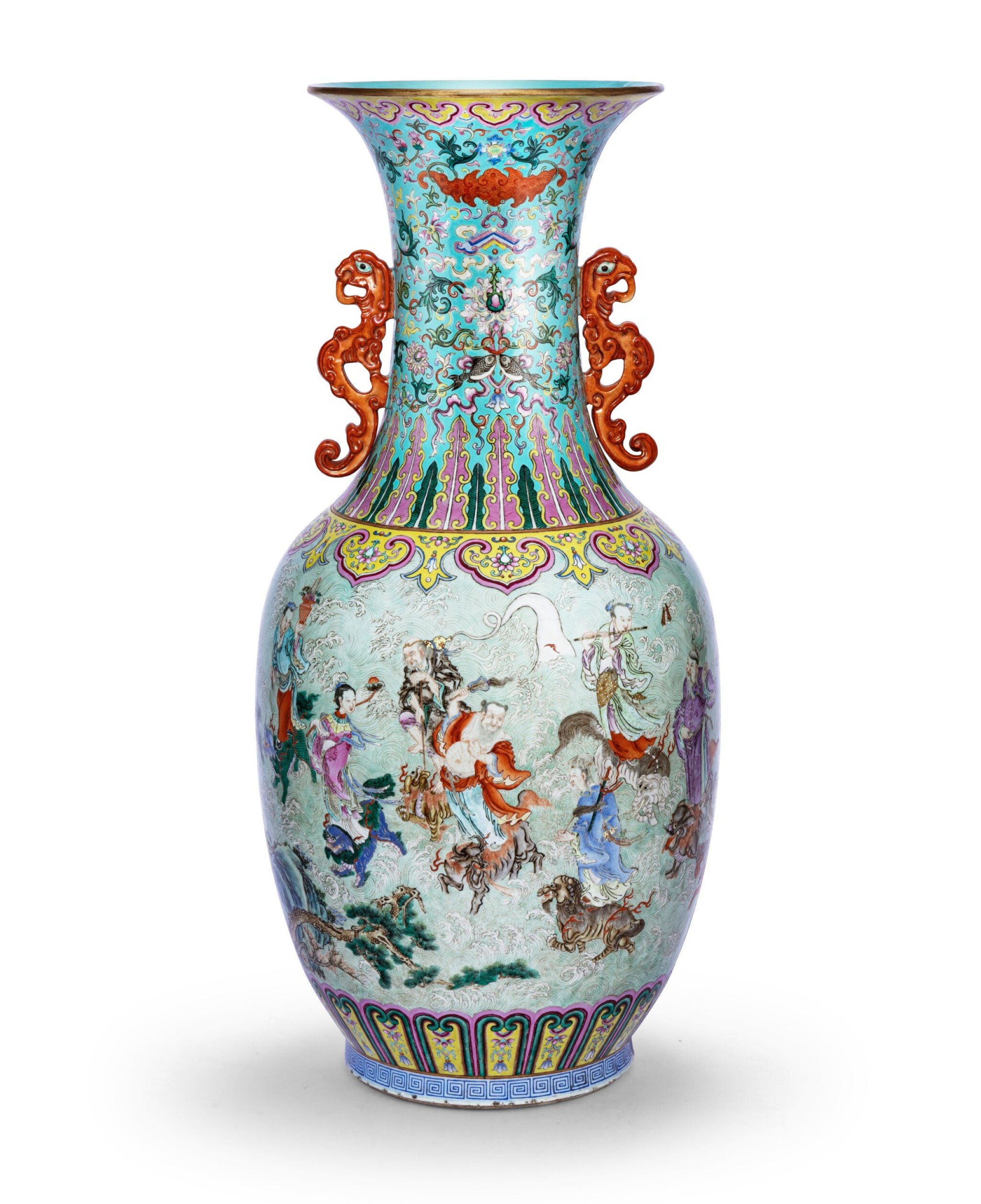 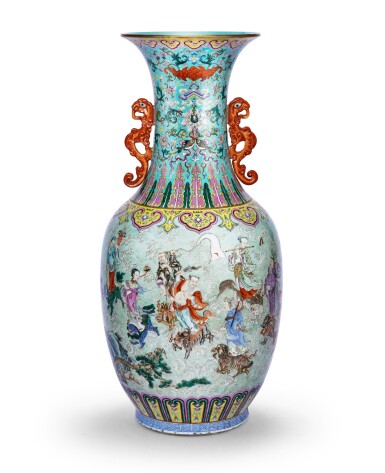 This large vase is superbly painted with vivid colours. The upper part of the neck has been partially broken off and has been very well restored. There are a few losses of enamels especially around the foot rim with associated nicks. There are some very light wear and some scratches to the surface.

The present vase is notable for its large size, its vivid palette and lively scene. It belongs to a special group of wares produced at the imperial kilns in Jingdezhen in Jiangxi province, that continued in the exuberant style established in the latter period of the Qianlong reign. Painted with the Eight Daoist Immortals in an idealised landscape and bordered by opulent curling leaves and auspicious symbols against a turquoise ground, the continuous scene encircles the vessel like a scroll painting. While originating in the Qianlong period, this style of painting continued to be popular through succeeding reigns.

This piece depicts the Eight Daoist Immortals as they cross the rough seas after attending the Peach Festival of the Queen Mother of the West, a well-known subject on 18th century porcelain. The immortals are depicted against tumultuous waves, suggesting that the scene illustrates the story whereby they combined their powers to sail past a tempest instead of travelling by sea. The story is a lesson on how individual strengths can be combined to tackle a shared obstacle.

Depictions of Daoist immortals grew in popularity after the Yongzheng reign and similar motifs are known on 18th century vases of various forms: a pair of Qianlong mark and period jars and covers, were sold twice at Christie’s Hong Kong in 1992 and 1995, and again in our New York rooms, 17th March 2009, lot 124, from the collection of Gordon Getty; a lantern vase was sold in these rooms, 9th November 1982, lot 302; another, with the borders on a ruby ground, was sold in Drouot, 25thSeptember 2020, lot 1; and a further vase, painted with the Eight Immortals celebrating the Queen Mother’s birthday as she arrives on a phoenix, in the Palace Museum, Beijing, is published in Kangxi. Yongzheng. Qianlong. Qing Porcelain from the Palace Museum Collection, Hong Kong, 1989, p. 350, pl. 31.

This style of decoration remained indeed very popular during the succeeding Jiaqing and Daoguang reigns, when this piece was made. Compare a vase of similar form painted with four elderly Daoist Immortals in an idyllic landscape, looking across to the Eastern Sea to the Daoist Immortals Paradise, but the floral borders on a ruby ground, sold in these rooms, 7th October 2010, lot 2163; and a much larger vase of this type and of similar shape, sold in Christie’s New York, 16th-17th September 2010, lot 1420.