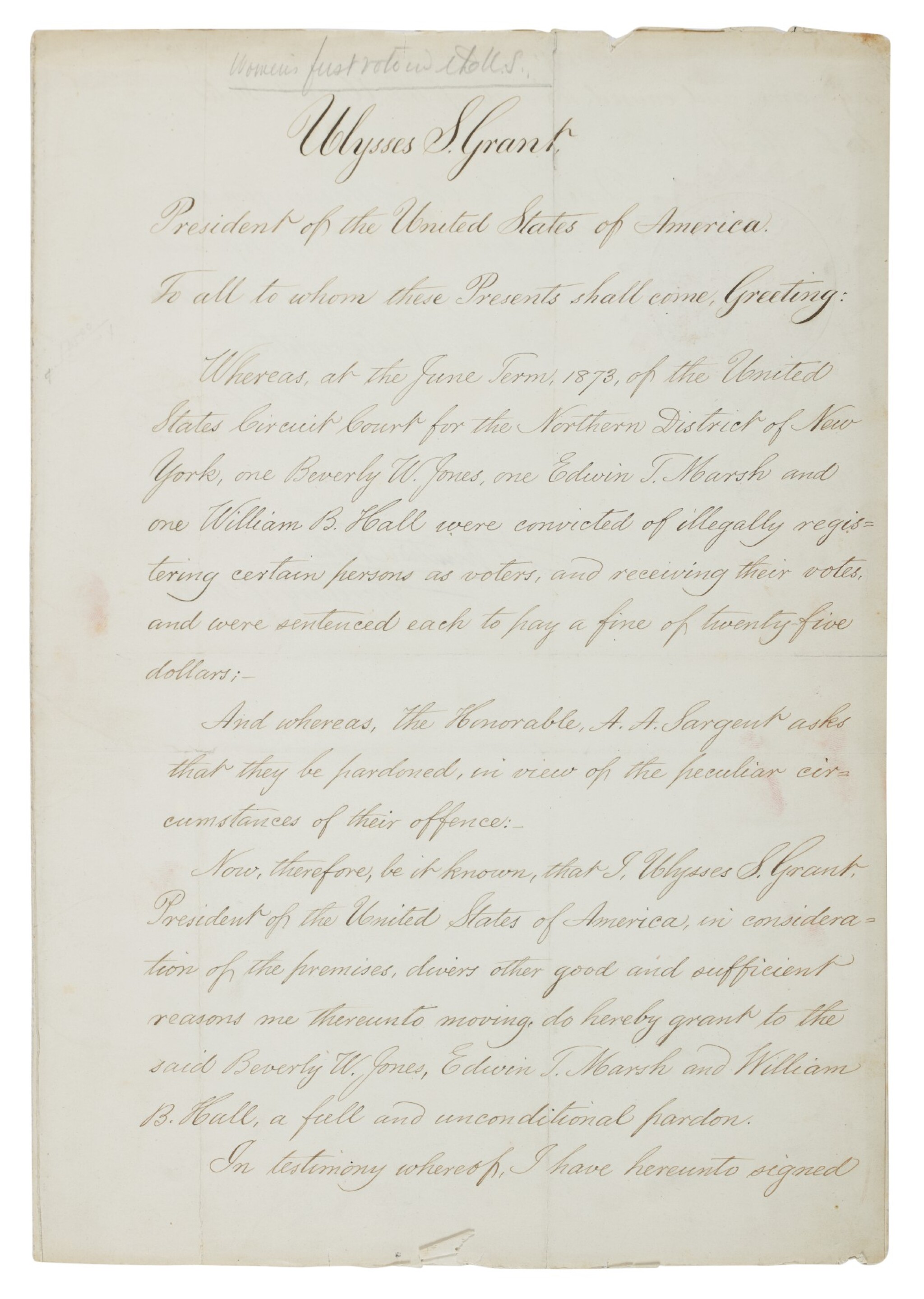 Forty-eight years before the adoption of the Nineteenth Amendment granted women the right to vote in the United States, women's suffrage leader Susan B. Anthony and fourteen other women voted in Rochester's 8th Ward in 1872. Anthony, at least, voted for Grant (who she had visited at the White House) and Republican congressional candidates. The women voted in order to test the application of the Fourteenth Amendment, which guaranteed all citizens "equal protection of the laws."

One of the election inspectors, Beverly Jones, later testified that when he was approached by Anthony, "I made the remark that I didn’t think we could register her name. She asked me upon what grounds. I told her that the constitution of the State of New York only gave the right of franchise to male citizens. She asked me if I was acquainted with the 14th amendment to the constitution of the U.S. I told her I was. … She wanted to know if under that she was a citizen and had a right to vote. At this time, Mr. Warner [the Supervisor of Elections] said, 'young man, how are you going to get around that. I think you will have to register their names'—or something to that effect."

Anthony and her compatriots were indeed registered and allowed to cast their ballots, but she was subsequently arrested. Tried and convicted of voting illegally, Anthony was fined $100 and court costs. She famously refused to pay the fine, maintaining that she had done nothing wrong, and the efforts to collect it were eventually dropped. (Anthony also called her trial "the greatest judicial outrage history has ever recorded.")

But Anthony was not the only participant in this episode to face legal consequences: Jones and two other inspectors were convicted of registering illegal voters and each fined $25. Unlike Anthony, these three men fought their convictions, and with the intervention of Senator Aaron Augustus Sargent of California—who first 1878—introduced the text of what would become the Nineteenth Amendment in, they were pardoned by President Grant, as the present document attests:

"Whereas, at the June Term, 1873, of the United States Circuit Court for the Northern District of New York, one Beverly W. Jones, one Edwin T. Marsh and one William B. Hall were convicted of illegally registering certain persons as voters, and receiving their votes, and were sentenced each to pay a fine of twenty-five dollars;—

"And whereas, the Honorable A. A. Sargent asks that they be pardoned, in view of the peculiar circumstances of their offence:—

"Now, therefore, be it known, that I, Ulysses S. Grant, President of the United States of America, in consideration of the premises, divers other good and sufficient reasons me thereunto moving, do hereby grant to the said Beverly W. Jones, Edwin T. Marsh and William B. Hall, a full and unconditional pardon.

"In testimony whereof, I have hereunto signed my name and caused the seal of the United States to be affixed."

Susan B. Anthony herself did not receive a presidential pardon until earlier this year, when President Trump issued a pardon on the centennial of the Nineteenth Amendment.