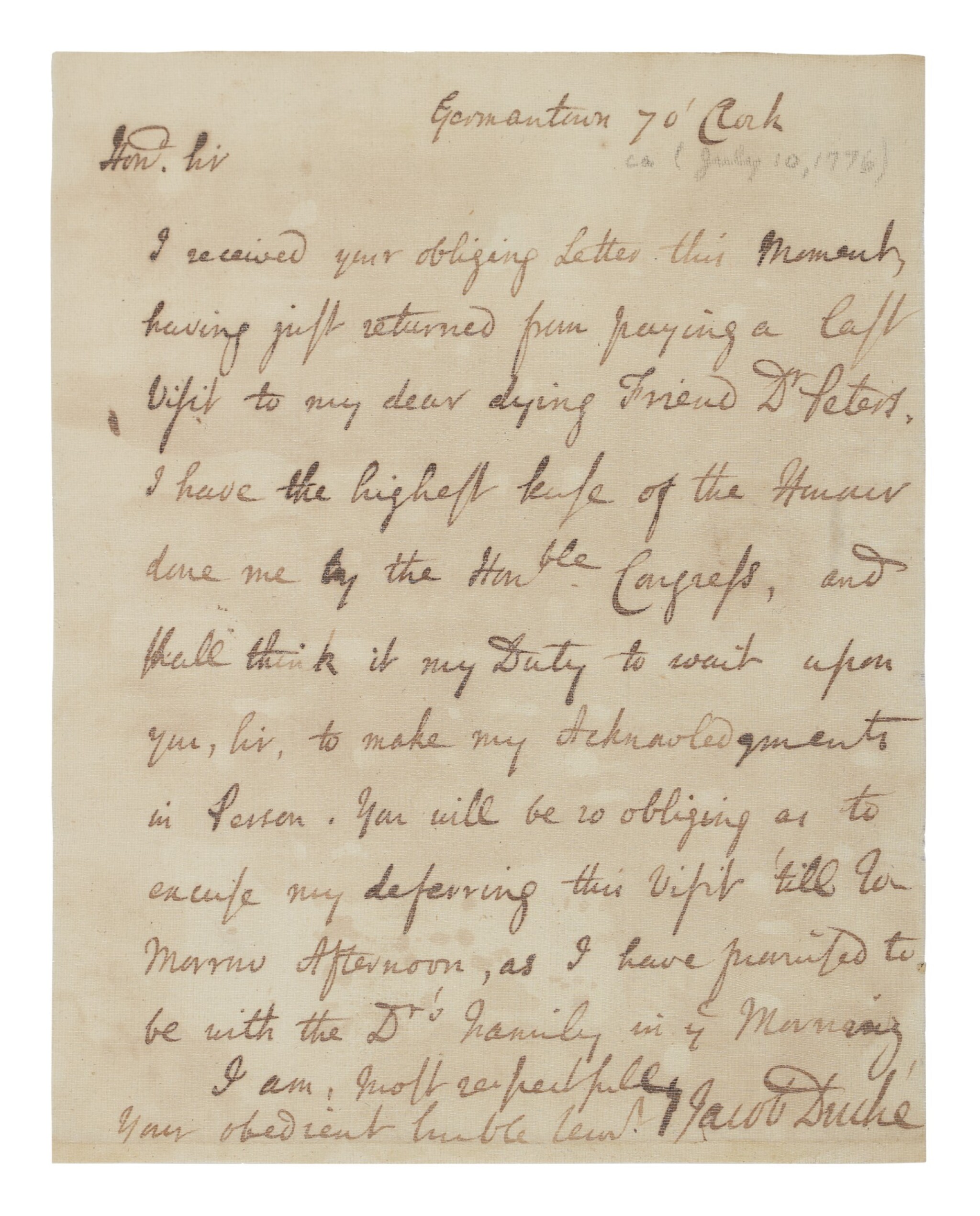 These two communications trace the brief, extraordinary arc of the Reverend Duché's revolutionary career, from the first official chaplain to the Continental Congress to Loyalist pariah. Duché, a Philadelphia minister, had a seemingly well deserved reputation for his eloquent sermons, and was asked to serve the as chaplain to the Continental Congress. At the opening session in 1774, his prayer upholding "these our American States, who have fled to thee from the rod of the oppressor and thrown themselves on Thy gracious protection," moved many delegates to tears. On 9 July 1776, John Hancock wrote to Duché to inform that his position had bee regularized: "It is with the greatest Pleasure I inform you, that the Congress have been induced, from a Consideration of your Piety & Religion, as well as your uniform & zealous Attachment to the Rights of America, to appoint you their Chaplain" (Letters of Delegates, ed. Smith, 4:418).

The present letter, addressed to "Hond. Sir," is assuredly Duché's reply: "I received your obliging Letter this Moment, having just returned from paying a last Visit to my dear dying Friend Dr Peters. I have the highest Sense of the Honour done me by the Honble Congress, and shall think it my Duty to wait upon you, Sir, to make my Acknowledgments in Person. …"

But Duché served as chaplain only until October 1776. Clarke Garrett writes that Duché "explained later that he had accepted the Declaration of Independence because he believed it to be an 'expedient' to win reform in colonial policy from the royal government. When he realized that 'independence was the idol,' he could not longer support it" (American National Biography). Then, when Philadelphia was occupied by the British in the autumn of 1777, Duché was arrested by General William Howe, and he emerged from his detention as a vocal Loyalist.

On 8 October of that year, Duché sent an extraordinarily ill-considered letter to George Washington, which the recipient immediately turned over to Congress. Duché's long letter repudiates his own role with Congress, which he here describes as "Bankrupts, attornies,—and men of desperate fortunes," and beseeches Washington to renounce the Declaration of Independence. He warns the Continental Commander that his army is but "a set of undisciplined men and officers, many of them have been taken from the lowest of the people, without principle, without courage," and that he has no chance of prevailing against the British forces: "your harbours are blocked up, your cities fall one after another; fortress after fortress, battle after battle is lost. A British army, after having passed unmolested thro’ a vast extent of country, have possessed themselves of the Capital of America. How unequal the Contest! How fruitless the expense of Blood?"

The text of Duché's letter was presumably composed with the assistance of a British intelligence officer, and its appearance as a broadside was intended as British propaganda (the broadside has many variants minor from the original letter preserved in the Papers of the Continental Congress). Whether or not Duché was the sole author of the letter, its appearance made it untenable for him to remain in American, and he and his family went into exile in England in 1778.

The broadside is very rare, as is any autograph letter by Duché.